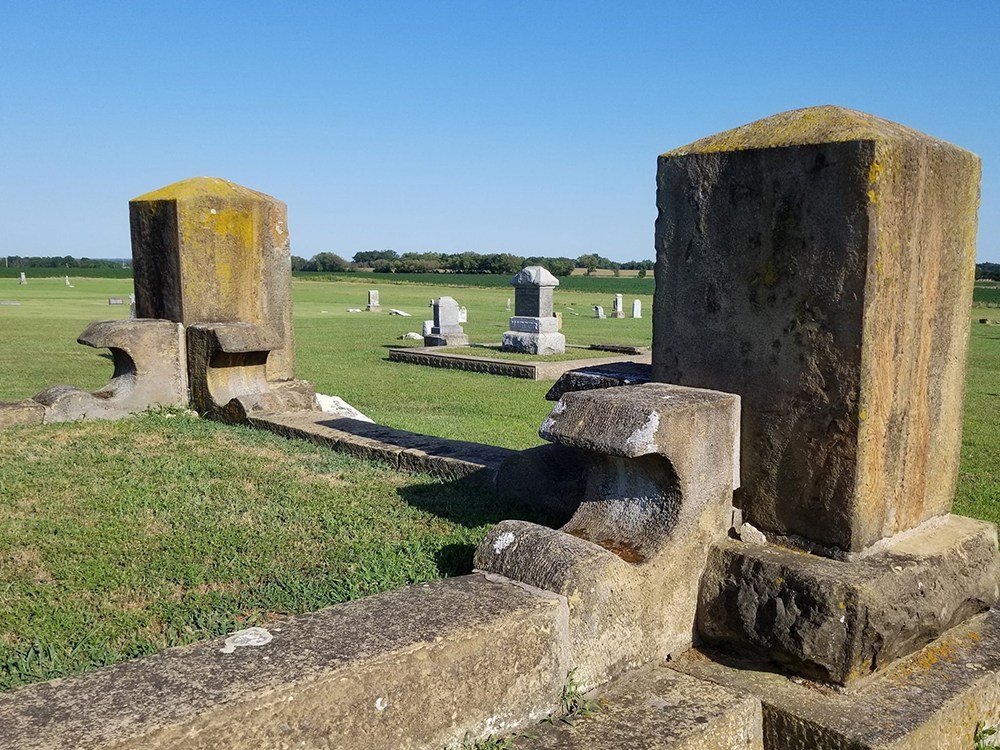 A coat theft in 1880 led to one of Yates Center's earliest gun battles, and the killing of John Welch.

I was sitting in Kalida Cemetery, near the final resting place of John Welch, who was killed in the infamous gun battle on the Yates Center square sometime around April 1880, when the town was only a few years old.

It began when John’s brother, Wiley, and other cowhands from Garnett had left a dance out at Dry Creek in northwestern Woodson County one frozen Christmas night.

Perhaps grimacing at the thought of the frigid wind sweeping across the open ranchlands, Welch stole a coat and pair of gloves belonging to Warren Walters.

Not long after, Welch was apprehended in Le Roy and arrested, and would spend the next three months in the plank-board jail near Yates Center square’s northeastern corner.

ON THE day of Wiley Welch’s trial, the townsfolk had gathered at the old Defiance courthouse in droves, which also sat on the square’s northeastern corner.

In a wild tear, though, they had poured from the benches and into the dirt streets after hearing gunfire, then just as quickly darted back behind whatever cover they could find.

Abraham Smith, who’d just finished his term as Sheriff, would take a less cautious approach and end up with a bullet-hole through his hat and bruise on his cheek where another stray ball just missed him.

John Welch and his accomplices, including Curly DeLang, the half-Cherokee mercenary, had begun their doomed adventure on the square’s opposing western side, at Clark Stewart’s harness shop, where farmer Albert Alvord had left his team and wagon.

That was all the opening they needed, seizing the reins and erupting south toward the place where Deputy Francis “Frank” Cannday was getting Wiley some air before the trial.

In a memoir written by eyewitness Eva Depew some 50 years later, she wrote: “As our home was just across the alley from the south side of the square, the furor of yelling and shooting that suddenly rent the air sent me hastily to the kitchen door. As the store buildings were pretty far apart my view was unobstructed. I saw a team and wagon carrying two men careening wildly down the street, pursued by a mob of some men afoot and some on horses.”

I was sitting on the square’s south side as I transcribed her words, dreaming Welch’s men thundering around the corner down the street.

That fateful day the sky might have borne little difference, with the wind weaving through the humid air, the clouds thin and frail overhead. The ebony swallows may have darted away from the wagon with jet black horses just as they now dodged the beat up pickups and cars with chipped paint.

Nearby, deputies Frank and Jim Cannady were taking cover, leaping up only when the moment arose to shoot.

I dreamed bullets whizzing through the air, the frantic shouting and confusion, the few wood-frame buildings that stood at the time being struck with stray balls or used as refuges from the melee.

Had I been sitting where I was while writing this account, might I have met my end as well?

Curly DeLang took a blast straight to the face from Jim Cannady’s shotgun, and was left permanently blinded in one eye.

I dreamed he and Welch’s other men trying to turn the horses from the square only to discover their newly acquired wagon had a broken rein and could only turn to the left.

Their plan of springing Wiley from custody and escaping to the cover of bell-leafed blackjacks north of town had failed.

John Welch was shot in the spine by deputy Frank Cannady, after demanding that he release his brother from custody.

The fatal confrontation catalyzed on the south side of the square, after Cannady lulled Welch into a false sense of security by telling him he was unarmed . . .  then CRACK!

Despite the severity of his injury, Welch must not have died immediately. County records show commissioners entertained the following bills:

-Medicine for prisoner (Not allowed)

AS FOR Welch’s final destination, I was sitting in Kalida cemetery when I again recalled Depew’s words, who wrote: “In an unmarked grave now scarcely more than a shallow depression in the earth filled with a matted profusion of weeds and grass, the slain bandit sleeps in old Kalida cemetery. Unclaimed, his body was buried at county expense.”

Thinking about Welch writhing in agony from the bullet lodged against his backbone, I could hear crows in the trees to the south, as a honey-bee flew circles around me then turned and darted north toward the sandstone Davidson memorial that looks as if it belongs to some rural Egyptian pharaoh.

“CAW! CAW! CAW! ” the crows cried, perhaps in warning. For on the day of John Welch’s funeral, as the priest intoned the last rights, his brother Wiley was standing cuffed nearby, coiled like a copperhead, waiting for the perfect moment to strike.

As one of the deputies leaned over, with both hands occupied lowering the coffin into the earth along the rope, Wiley sprung for the man’s gun.

He failed in the attempt, and caught a fist in the teeth for his trouble.

One imagines the red rage smoldering in his eyes as blood ran from his cracked mouth, as his brother was laid beneath the earth which today is covered in dandelions, clover and saw-leaved moon daisies.

One imagines Welch later pacing the floor in Leavenworth prison.

IN THE aftermath of the Yates Center battle, Frank Cannady was only slightly better off.

For years afterward, he lived in fear someone would avenge Welch’s death.

Indeed, in 1925, a reporter from the Kansas City Star wrote “it was said of Frank Cannady to this day that he slept with a gun under his pillow and never sat with his back to the door.”

Hence I crept to the end of Rutledge Street as I had so many times before and stood beneath the shadowy cover of trees overhead, dreaming of Frank as he cut sandstone blocks from the earth for the Depews house nearby.

I watched as the sweat poured from his brow as he fruitlessly tried to work himself free of post-traumatic stress, straining to overcome the memories and the crushing, anxious fear.

“Hey you, there!,” he shouted, reaching for his repeating pistol. Though just as the gun clicked and I closed my eyes, he was gone.