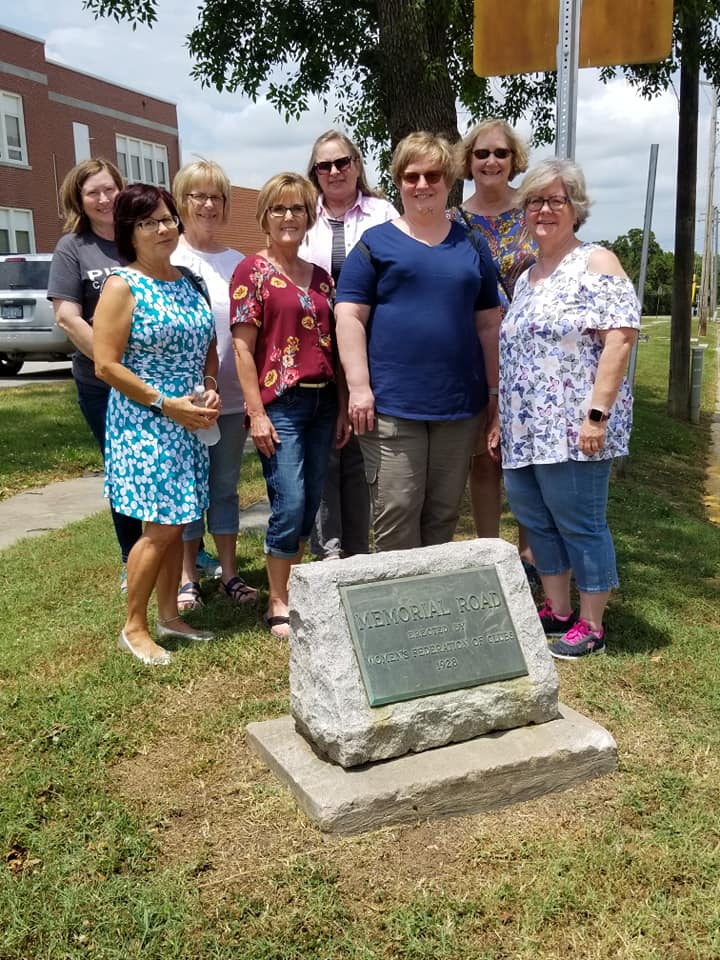 Widows Way: Walking in the footsteps of women

A group of Yates Center High School alums took a special walk through downtown recently to visit monument by the Women's Federation of Clubs nearly a century ago. A portion of the trek covered the "widow's walk" a long ago sidewalk project spearheaded by the club.

The June sun was blazing overhead when I met up with a special group of women from the Yates Center High School class of 1976.

They’d gathered for a mini-reunion of sorts — based on a foundation of “life-long friendships,” as one participant put it — and as part of the festivities had agreed to humor me by taking a unique kind of walk.

It would be a retracing of the path of industrious and community-minded women who’d come before them, a walk with busy ghosts.

On the corner of Main and Bell Streets in Yates Center, near what was once the extreme north end of town, sits an inconspicuous monument that reads:

Beneath the dull and discolored marker — which looks a bit like a tombstone — hides a time capsule, more specifically, a copper box containing information about the project memorialized.

The story goes that in 1927, frustrated that the path from the north end of town to Graceland Cemetery wasn’t terribly hospitable to foot traffic, the 20-plus womens’ clubs in town decided to start a campaign to build a new sidewalk.

According to James Fisher, this was especially spurred by “the few newfangled motor cars speeding by walkers, that billowed dust or sprayed mud.”

Despite the path to the cemetery being somewhat treacherous, especially since at the time most folks couldn’t afford to buy an automobile, the city council at the time rejected the idea of building the walk as too costly.

Undeterred, the wily women of Yates Center sprung into action, starting a campaign where they placed tin cans all over town for donations that read “a penny an inch.”

AS THE CLASS of 1976 strode along these penny-inches, some reminisced about attending a rural school prior to Yates Center High, such as Perry School near the southern edge of the county.

“We were stuck out that direction,” said Debbie Stevens. “But I wouldn’t have given it up.”

Today, Perry schoolhouse serves as a hay barn, with yellow bales occupying what was once the gymnasium.

Many in the group who hadn’t returned to southeast Kansas for some time remarked on the housing blight and economic decay as they looked around from the memorial sidewalk, where they could point to places where house after house once stood.

It’s incredible, “the number of houses that look so run down and dejected,” said Kathy Alexander.

It’s just one more reminder of the many things that rural America has lost. The women had no problem enumerating events and activities that were once staples of their daily lives that are no longer present — everything from watching movies at the Temple Theater downtown to eating at restaurants like Woody’s and Peter Pan.

One thing that is still intact is their humor. When prompted to talk about any of things they’d lost more specifically, they responded, cackling:

The women seemed to have a pretty cheeky sense of humor when it comes to how rural women are often perceived.

They readily joked about “living in the stix,” seeing tornados and the supposedly perfect flatness of Kansas itself.

“Do you have electricity?” laughed Nancy Kelley. “I even have indoor plumbing!”

The peals of laughter reverberated down the dark and shadowy hallways of the high school once the group had made their way inside.

But the camaraderie had most certainly not dimmed; rather, it was clear the fellowship had been rekindled amongst the group.

It’s a spirit of solidarity I imagine bound together the womens’ clubs of 1927-28, and guided them in their civic triumph.

A victory of community and togetherness as such.

THIS MIGHT BE all to say that the women’s sidewalk project wasn’t merely about building a simple walkway, mind you, but about something grander and at the same time somewhat alien to us today.

A hundred years ago, visits to the cemetery were much more a component of daily life, part of a community’s sense of closeness, with school children and families often walking to burial places for gatherings, picnics and more.

When people died, in a gesture of empathy, someone would place a wreath adorned with lovely blood-red flowers on the door of their home, as a signal to others that someone there had recently lost their life.

The Graceland Cemetery was considered one of the pride and joys of Yates Center, something of strange and terrible beauty to be celebrated and shared with others.

There was a different sense of how our ancestors and their influence permeate our lives, how they continue to be present with us, guide us and haunt us, in senses both positive and negative.

It seems death was held closer at hand rather than distanced or dissociated from people’s worlds, evincing a kind of existential honesty about our inevitable demise rarely seen today.

… An honesty that perhaps the womens’ clubs understood in some profound way.

By Memorial Day 1928 — what at the time was called “Decoration Day” — the women’s clubs had managed to raise $1,854.25 for the sidewalk, which as Kelley pointed out was considered “quite a lot of money!”

And so it came to pass, that the subtle passageway running from east of what was once the site of the old Washington High School, then north along pasture fences, all the way to where the cemetery’s gazebo now sits today was constructed.

Sometimes called “The Widows’ Walk,” the pathway was dedicated at the same time as the bandstand sitting west of the Woodson County courthouse.

“I’m proud that women did that … that’s amazing,” said Kelley. The women of Yates Center “saw a need, and then did something about it … That’s what we need to do in our lives.”

Today, the sidewalk still serves as a path for reflection on mortality and community, as one vividly dreams the early twentieth-century women with black dresses and black hats treading along the same path.

It is a place for recalling what we have gained and lost, confronting the irretrievability of the past, and recognizing it as a situation which we all inescapably share.