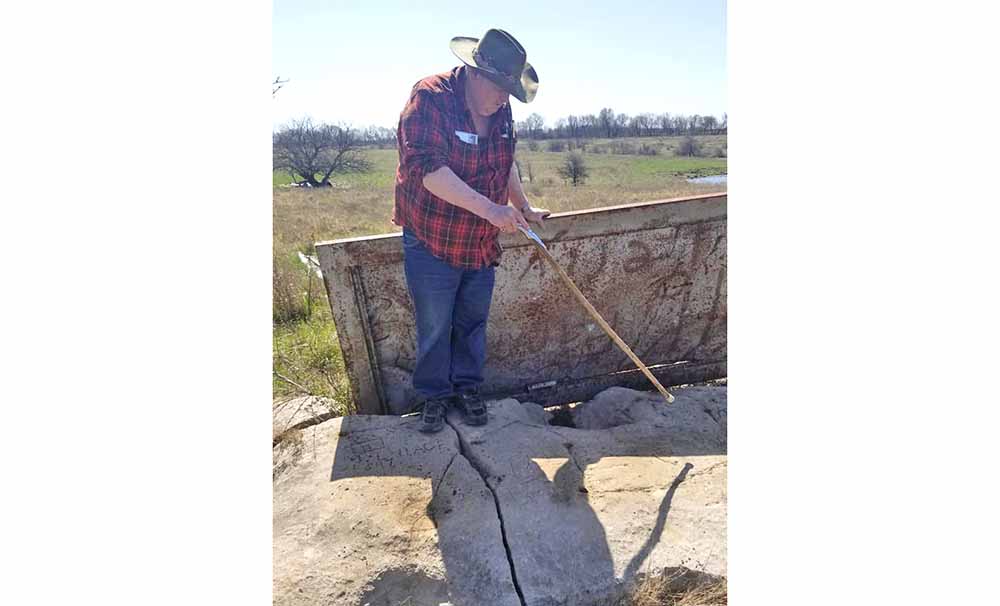 Whispers at the Kettle Hole

And on Easter Sunday as I stood on its northern banks, not far from the deep, rocky-bottomed section called the Kettle Hole, I swear I could hear it whispering.

It might have been ghosts of “the Holy-Rollers,” for as Minnie Munson recalled in the Marmaton Valley Sun, at the turn of last century and beyond, this was a place where church groups performed full-immersion baptisms.

“This was an exciting time for us kids, as it was for the ones who were saved,” she noted, along with pointing out how the “sinful men and boys” tended to watch wolfishly from the background.

Those set to be baptized typically dressed in white muslin, and without any undergarments.

This unwittingly produced quite the scene, it seems, as the faithful not only had on fewer clothes, they’d come out of the water with “garments sticking to every curve of their bodies.”

In some instances, this drew long stares of “admiration,” in others, “smiles and snickers.”

Given the potential for said mortification, Munson herself decided that “if God couldn’t forgive me and accept me by being sprinkled, He would never get me. If I had to be half drowned and snickered at, I’d just be a sinner.”

The RIVER also recalls the days when the nearby Rocklow schoolhouse, district No. 36, doubled as a church.

For as Munson points out, “it was during a church service one night that a shot was fired at a preacher in the Rocklow school house. He happened to turn and the bullet hit and lodged in the blackboard near where his head had been.”

“Some history has it that Columbus Carter fired his high-powered rifle through the school house trying to hit the minister,” Munson said, though given all the mythology surrounding the Allen County Land Leagues (and anti-Leaguers like Carter), it’s difficult to verify one way or another.

Long story short, if Carter did fire a shot, it would have likely been due to his opposition to the Leaguers who met at Rocklow and contended squatters could lay legal claim to land that was in fact owned by major railroads.

Speaking of transportation, in the pasture north of the Kettle Hole are remnants of the wagon trail that led from Fort Scott to Humboldt.

Munson adds as well that “at one time there was an inn there that travelers going from Fort Scott to Humboldt stopped at overnight to rest and feed horses.”

The inn may be long-gone now, but the wagon tracks are still apparent, especially given the way the grooves augment how the surrounding grass grows.

It might seem like a stretch to claim that gashes in a field have historical significance, but what truly supports the claim is lurking nearby.

Called “Perry Rock,” in 1897, a large, uneven stone slab was carved with an intricate map of the trail, featuring an outline of the path from the rock itself to Humboldt.

There are also interesting figures etched into the stone such as a pioneer man and woman, a horse, various buildings and life-saving watering holes.

Of course, the Marmaton River was itself a mode of transportation, with its name coming from the early French fur traders who saw mammals like muskrats/prairie dogs lining the water and used their native word “marmiton” (nasal ‘o’/silent ‘n’) to describe them.

Since almost no one knew how to write the French word upon hearing it, you can imagine how many different spellings there were: Mawmetow, Marmeeton, Marmatin, Marmoton, Maratow, Mamiton, etc, etc.

The earliest people to frequent the area near the Kettle Hole were Native Americans, clear into the late 1870s, after most indigenous people had been forced to relocate elsewhere.

The space is one of intense silence and reflection; one that calls the occupant into an almost mystical state, “here and far beyond where the eyes can see, where lies the haven powers of Nature teeming with life.”

Thus Gustafson implores: “Put your ear to the stone wall and listen to the voices of the past and present. Share the sound of all living things that have become impart of the solid rock which breathes, murmurs, whispering gently a calmness and peace to comfort and cradle mankind.”

Just as the river remembers, so do the stones.

Two stones, boulders, in fact, also reportedly guard the grave of a particular native warrior near the Kettle Hole, and which have been dug beneath many times “by those seeking treasures.”

Indeed, the area has been picked clean over the years, including local Cassava pits, with the number of artifacts found now dwindling to almost zero (including running them over with farm implements).

This is likely for the best, however, as it permits the vital spaces described above to remain sacred and undisturbed.

For indeed, as Munson and Gustafson point out, the Marmaton River has its “moods,” and it would be wise not to anger such an immense and ancient force.