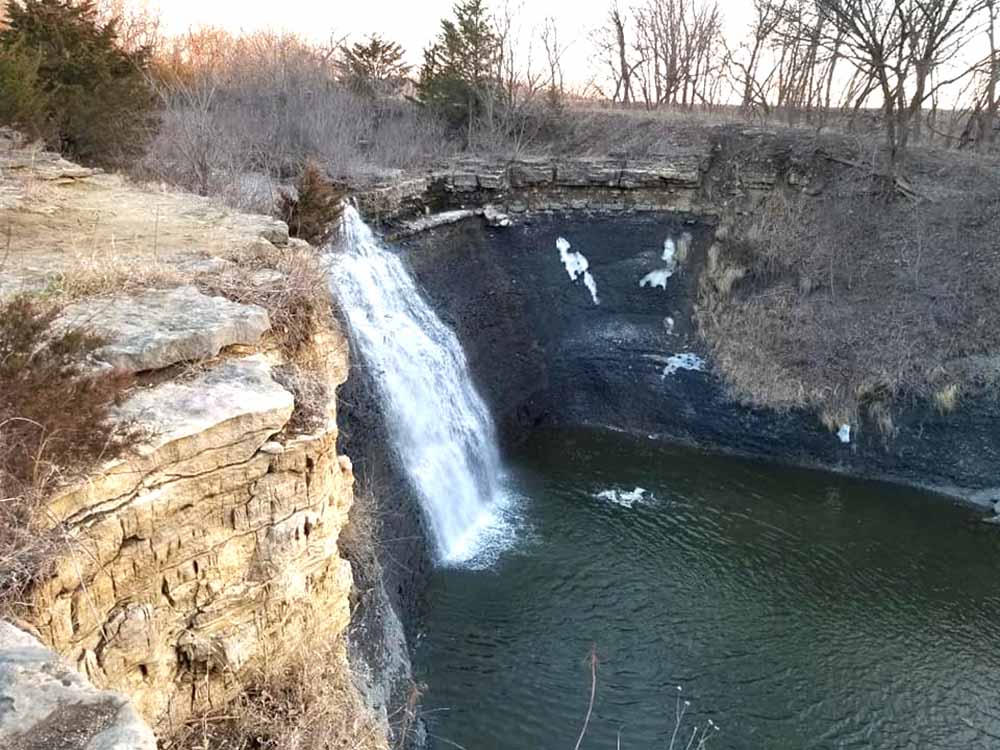 What dreams may come: Hamlet’s Castle and the black waterfall

Like Prince Hamlet and his friends, when last in Elsinore I, too, saw a ghost.

It wasn’t atop the ramparts of an ornate castle in Denmark, however, but near the banks of Big Creek in Allen County, the place east of Humboldt later christened Old Elsmore.

I was wandering near the Old Elsmore/Elsinore Cemetery, using it to determine the location of a vanished schoolhouse, when first he approached me.

C.C. Thompson had momentarily vacated the undiscovered country, was circulating a petition to become postmaster at Elsinore and eagerly approached me to sign.

Knowing he was destined to lose, I nonetheless scrawled my signature in the air, though I also knew he was reported to have soon after “stolen” another office nearby.

According to Register archives from 1888, Thompson was accused of having relabeled his Elsinore signatures so as to become postmaster in Savonburg instead.

Suffice to say, it worked, though angered folks in a manner akin to other potentially-spurious elections around the same time, such as that of Iola vs. Humboldt for the county seat.

Humorously enough, C.C. Thompson wasn’t the only one engaged in antics around Elsinore.

“Some of the young men of Old Elsmore go to church with their breath heavily loaded with that which intoxicates, and then expect a young lady to accept their company home.”

Indeed, it’s hard not to dream them there, walking the road between the schoolhouse/church and cemetery, young women laughing and rolling their eyes while being enthralled by some Romeo full of liquid courage.

Together they would form part of a unique community that remained in the Allen countryside for years to come, proud of its ball team and grange, but whose existence is only scantily recorded.

Beyond a few newspaper records, about the only remaining artifact is a postcard bearing the name of Elsinore, addressed to Kate Bacon, who was attending Baldwin University in 1881.

“Dear Kate, Bring all your clothes and leave your bed and dishes,” read the near-ineligible graphite scrawl. “When you move, get Brother Jones to take your stove back to the man it belongs to.”

As for Elsmore proper, the town’s second (current) site came into existence with the coming of the Katy Railroad, as it extended from Kansas City to Parsons.

This was reportedly how the name change away from Elsinore took place as well, with someone sloppily painting what looked like “Elsmore” on the railroad depot’s signage.

In preparation for the coming tracks, N.L. Ard, H.W. Cox, O.P. Mattson, J.A. Nicholson and J.L. Roberts joined forces to purchase the town’s 20 acres, and within a few years, it had become a popular trading center and shipping point.

Along with the early boom, however, also came the infamous Land League troubles in the late decades of the nineteenth century.

The Katy Railroad had been given Allen County land by the federal government, which it then sold to settlers in order to finance future lines.

Problem was, when those settlers finally arrived in Kansas, they already found people “squatting” on their land, which led to various acts of deadly and outright murderous conduct as people battled for soil.

The blood finally ceased flowing when it was declared that the squatters had no rights and the railroad won the day.

In 1909, Elsmore was officially incorporated.

The population soon jumped to over 200, and the town boasted several goods stores along with small manufacturing enterprises.

The city’s first school was Wood Hall, and its first teacher was founder Henry Cox, whose reddish-orange headstone states that he and his wife “tried to make the world a better place.”

By contrast, natural disasters made early life in Elsmore a nightmare.

In 1916, a tornado ripped through the area, causing significant damage; and not one but three fires stuck.

One inferno devastated the north side of the business district, another torched a hardware store and harness shop. And the city’s restaurant was damaged in a blaze later in the decade.

Apart from “the thousand natural shocks /That flesh is heir to,” however, there were still plenty of high times in early Elsmore.

The high school women’s team won the 1917 state championship in basketball, for one.

And like many rural places, Saturdays in town were a blast, with band concerts, people visiting and shopping; they also held blow-out dances in the hall above the drug store.

If that wasn’t enough to get your blood up, there was always the occasional wolf drive, where one could test one’s aim against the “local nuisance.”

Things continued to look up thanks to oil being struck east of town in the 1920s, but when the Great Depression hit and Elsmore Bank closed, the town never truly recovered.

When looking down the town’s primary streets today, it’s as if the entire solid place had melted, thawed and resolved itself into a dew.

For if one continues east on Delaware Road out of Elsmore to the Allen-Bourbon border, one finds a third, though much younger, community: Lake Elsmore.

Though not an official town, it seems the lake community has more residents than Old Elsmore/Elsinore ever did, and likely also exhibits greater mischief.

Although the lake may look old, it’s actually a man-made creation that came into being in the mid-to-late 1950s, paid for by the sale of Kansas hunting and fishing licenses.

Construction was started in spring 1956, and the site officially opened on November 10, 1959, turning the tree-studded hills flanking Wolf Pen Creek into a fisherman’s paradise, originally stocked with channel cat, crappie, bass and bluegill.

Everybody’s favorite feature of Lake Elsmore, however, is the hidden waterfall tucked away on the north end of the lake.

It’s not terribly difficult to reach, even amidst the chunks of sandstone, where one finally joins the murmur of water crashing before a wall of blackened sediment.

It’s also possible to climb to where the water drops about 25 feet straight down.

The artificiality takes nothing from the scene, and so long as one does not dwell overlong on the fate of poor Ophelia, the shallow pool calls one into inescapable reflection.

Returning back through Elsmore, I watched as the sky turned a thousand hues of pink and gold, as the town’s black shadow resonated below.

I drove slowly past rows of cemetery trees into the coming darkness, wondering what other ghosts might now be about their business.