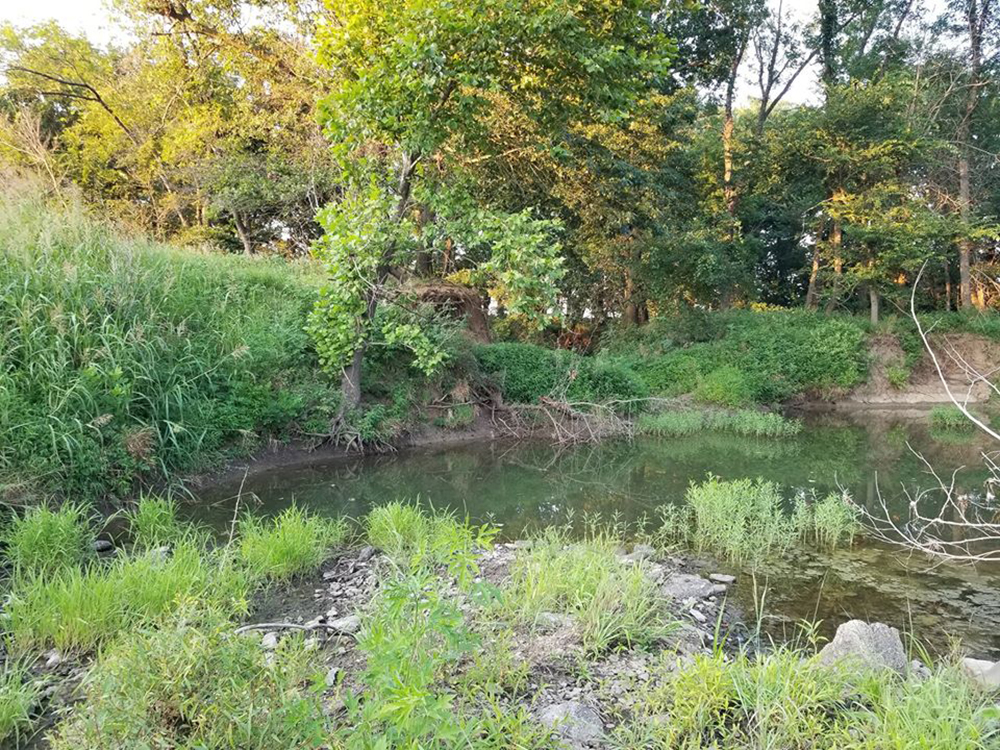 Waterways: The majesty of Owl Creek

A bouquet of sights and sounds fills the scenery around Owl Creek. From owls and crows to chiggers and fish, wildlife is a constant companion.

Moments after arriving at one of Owl Creek’s southerly bridges, I heard them: HOO-HOO, HOO-WHAAA! WHAA!

For once I’d arrived in time to witness the sunset, though obscured behind drooping trees along the riverbank, leaves brightened with yellow in the evening light.

I saw the sky reflected in dark pools below, more “green-gray bark waters” like those of the Verdigris River on Woodson County’s western edge.

A murder of crows adorned the scene, chiming in with the low roar of the baler and other haying equipment I passed down the road.

If you follow the creek southeast, you’ll eventually arrive near Humboldt, a trajectory roughly followed by many early residents who had “in-town” business.

And if you follow the creek northwest you can find the ruins of Durand and its depot, as well as South Owl Lake, better known as Yates Center’s “old” reservoir.

WHEN I SET OUT for somewhere to write in this area, what first came to mind were cemeteries: Pioneer graves like that of Emily Condict, who died in a carriage runaway accident, Owl Creek Lutheran and Catholic, or Linder-Orth, resting places of German immigrants and their descendants.

But then it dawned on me: Owl Creek is named for something very much alive, and its ghosts could wait.

Though one senses them everywhere.

I tried to imagine indigenous people especially, enter the dreamtime with eyes open, and saw them gathering water, fishing, and camping on the open prairie long before it was farmland.

I heard their songs commingling with those of the cicadas, the smoke from their fires blending with the golden-blue light.

WHOAAAA!!! the owl close to my left exclaimed. Do not forget about me! I, too, am part of this immortal choir!

Though I couldn’t see its face, I dreamed it square and brown, with piercing yellow eyes and sharp black beak.

She knows something about dreaming as well, this early-risen nightbird.

More than once I heard a fish break the water with a plop and a splash.

Often it was aggressive, with wiggling bodies breaking hard against the muddy surface, echoing out rings of movement.

The wind was almost still, the temperature reminiscent of fall.

My breath, too, was without depth. I sat, waiting, chest barely rising and falling, like a snapping turtle resting on the creek-bottom, waiting to snare an unsuspecting passerby.

The welts on my leg throbbed from exploring woods surrounding the ruins of Fort Belmont, when my friend Luke Heller and I were swarmed by hornets.

My right ankle was inflamed with chigger bites as well, what seemed like a thousand little red marks where microscopic arachnids borrowed my skin.

Sometimes lately I feel like what a chigger must: crawling across vast surfaces of the county, searching for nourishment and warmth, trying to dig in, looking for something to sustain a ceaseless hunger.

Someone then tore by in a large green truck. I waved, but didn’t get so much of a nod. A reasonable response, I suppose, to someone perched atop a bridge in a bright red lawn chair.

After becoming anxious in my not-belonging, I turned to leave and came face-to-face with an enormous male raccoon on the bridge.

He trundled along, back arched, not noticing me at first, then beat a hasty retreat.

A hard flapping I’d been hearing also gained its source, as a silver heron charted horizontally, leap-flying from tree to tree.

It battered thousands of feathers with each wingbeat, an impossibly dense sound, until I realized it was accompanied by a mate. Then a third, a fourth, a fifth heron.

They disappeared upstream, angling toward the position of the setting sun.

Old Man Coyote, that legendary sly fellow, next erupted : Ow-Ow-Owww! Then another: Owwww!!!! Then what seemed like a dozen: Eiiiiieeww!! Owwiieeoouuu!!

I walked back toward the car and noticed two white-tailed deer crossing the gravel road far ahead. Their coats reddish-orange as they crossed the soybean field north of the creek.

This place is so full of life, I thought.

Yet just as I began to philosophize, a woodpecker hammered against a nearby tree, the hollow knock interrupting thought and demanding it instead become observation.

THOUGH IT’S POSSIBLE these words will fail and disintegrate, I want to convey to you the sublimity of the Kansas sunset that filled the horizon north of that bridge and beanfield.

The treetops were black, with intricate outlines that, were I a red-tailed hawk or some other being whose religion is the sky, I might have been able to relate their nuance.

How do I convey the awe felt while facing the horizon’s aurora that night, its blue-green curves falling toward the earth, the hazy pink wisps and orange hues that lined those shadowy treetops?

How do I explain that out there, amid the fading colors of evening, the red-oranges and turquoise, the oceanic space carved out, hollowed and refilled — in that moment, beyond hope, I found a reason to keep living?

When I knew everything would be okay, even if it isn’t.

Because the sky is broad and the sun will set tomorrow until it doesn’t, when you or I are no longer here to see it.

When the creatures of Owl Creek are the only ones with eyes left to see.

But until then, I invite you to weep there, before that hallowed sunset, if only a single tear — there where the colors dim and turn and bleed, and the night blesses you as it comes.

Life does not make sense.

But there on the edge of coming stars, in that place open to the cosmos, where arms of the Milky Way christen the darkness and make it holy beyond all human thoughts and words …

You will see Venus rise in the southwest, accompanying a rainbow that pervades the entire sky and overcomes the boundaries between darkness and day.