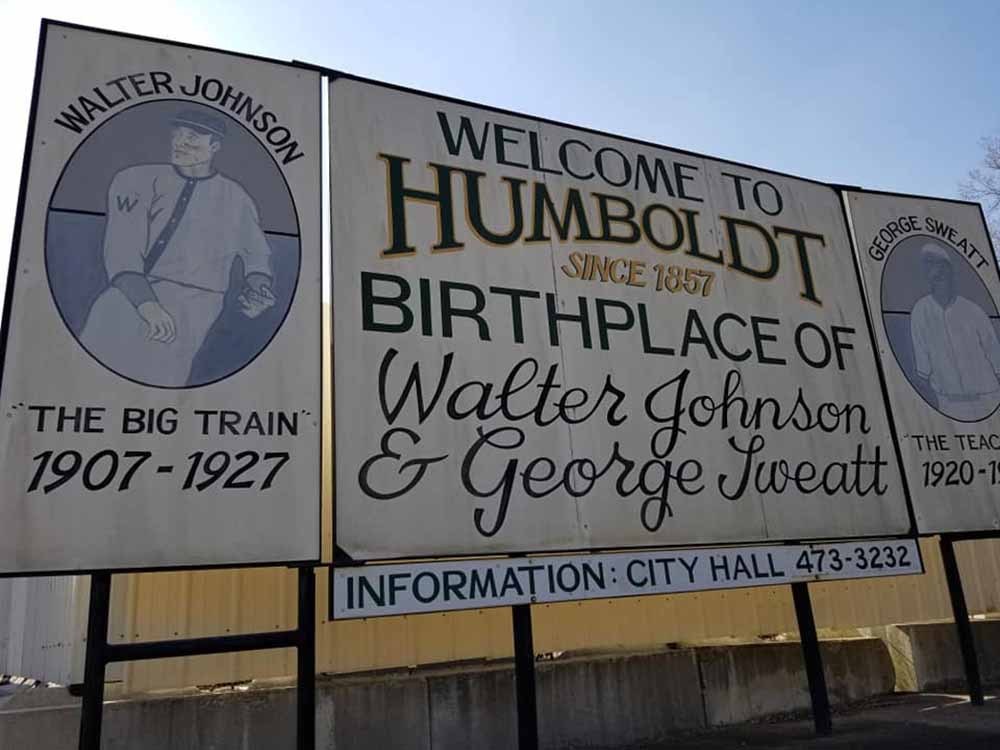 One of baseball's greatest pitchers grew up an average kid on a farm north of Humboldt. Walter Johnson discovered sports by tossing a rubber ball over the Crescent Valley one-room schoolhouse.

Long before Walter “Big Train” Johnson became arguably the greatest pitcher in Major League Baseball history, he was just your average kid on a farm north of Humboldt.

Though the family’s white clapboard house is long-gone from where it once stood, one dreams the place abuzz with activity nonetheless, breaking through the silence of farm fields under cloudless cobalt skies.

There in the river one could swim all summer in dark water, and fish under willow trees that still bend in the soft wind.

When he was young, Johnson exhibited an almost supernatural kinship with animals, whether it was trying to break in his father’s colts, or trying to capture and tame various wild creatures.

His brother Earl shared the story that once he and Walter spotted an enormous gray wolf across a pasture, and chased it back to its den beneath a rock.

Fearless, Walter started scooping up the five young cubs he found nearby, and as Earl observed: “Had the dens been connected, the mother would have torn him to bits.”

Earl likewise recalled his brother’s abilities with a rifle, and how he revealed early physical gifts by being able to target squirrels 60 feet away with a sling.

One wonders if he threw sidearm even then, a style that became a signature part of his lightning-speed fastball.

As for the beginnings of other athletic abilities, Johnson credited his physical strength and endurance on the ball diamond to endless labor on the farm when young.

But although well-suited for such work, Johnson suggested that farm life was also isolating, and he and his siblings relished traveling into “the big towns” of Humboldt and Iola in order to procure necessary supplies.

Upon entry into Humboldt, one has been greeted for decades now by an impressive billboard honoring Johnson, along with his contemporary phenom George Sweatt.

Given his famously humble demeanor, one wonders if the spectacle would have embarrassed Johnson, such as when thousands would later gather to celebrate him in town for annual “Walter Johnson Day” celebrations.

AS PER formation of Johnson’s early character, it’s intriguing how, according to his biographer (and grandson), Henry Thomas, the Johnsons were exceptionally upright people, but their moral education was more secular than religious.

As brother Earl explained, “it was wilderness-country where we lived, and churchgoing was difficult. But our father and mother taught us the Golden Rule, and we lived by it to the best of our ability. Walter, I believe, best of all.”

Standing on the edge of the field where the Johnsons once lived, with its carved stone memorial, one immediately gets a sense of the expansiveness of the scene, and realizes how a walk to church might have been quite the long trek.

In the absence of formal training, then, it would seem the character of the Johnson family was honed through an unwavering pragmatism.

The only “rules,” if one were to call them that, included tolerance, respect for others and just plain minding your own business.

Walter and his siblings regularly walked to Crescent Valley School, about a mile and a half from the farm.

Treading uphill both ways, rain, snow or shine, they would walk the dirt roads to the little one-room building, where around 20 or so other children attended as well.

Crescent Valley was the place where Walter discovered sports, first by simply tossing a rubber ball over the roof of the building.

Another game that was likely formative included “one old cat” or “one-eyed cat,” a rudimentary version of baseball.

Johnson recalled an occurrence at Crescent Valley where, in order to prove he was strong enough to pitch, he launched the ball over everyones’ heads, including brushing the teacher’s, where it then bounced up to the school building and smashed through its biggest window.

“I honestly thought I would be sent to jail,” Johnson said.

Following a severe drought across Allen County, the farm was sold after being kept up for the previous 15 years.

The family moved to Humboldt in April 1901, renting a house in the southwestern part of town.

Only a few days later, a nearby stable burned down, killing the Johnson’s only cow.

“There was hard sledding in the Johnson home at times,” Walter remarked. “But we were all the better for it.”

He began working as a farm-hand on the ground his family once owned, earning 50 cents a day during harvest time, and around the same time, started attending Humboldt at the eighth-grade level.

The school didn’t have a ball field or diamond, so area kids would simply play in the streets, apparently much to the chagrin of the Humboldt Union’s editor, who regularly opined about the practice.

Perhaps the most entertaining tale from these escapades involved the time when, after beaning several players, an opposing team said they refused to play if “Wild Johnson” was going to continue to pitch.

“I’m going to pitch or there ain’t goin’ to be any game,” Johnson retorted.

“And with that, I laid right down on the pitcher’s mound and refused to get up until they finally agreed that I could pitch.”

It was a rare instance of contrariness or moodiness on Johnson’s part, but it also evinced a stubborn tenacity that would serve him well through his storied career with the Washington Senators.

According to grandson Thomas, Walter Johnson headed for California at age 14 so that his father could pursue work in the oil industry,

Johnson had yet to play an actual formal game of baseball.

Yet still somehow the streets of Humboldt helped give birth to a humble legend, and pave the way for greatness.