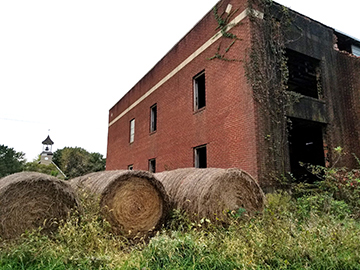 More than a century ago, notorious Woodson County prankster Alexander Hamilton claimed UFO-flying aliens stole his livestock. The legend soon took on a life of its own.

Just when you think things can’t get any weirder, that’s when the aliens arrive.

Or at least that’s what an old settler named Alexander Hamilton claimed happened at his ranch south of Vernon in 1897.

He staked his sacred honor on it.

Apparently the extraterrestrials stole and dismantled his prize heifer, which perhaps explains why even today the cattle at Hamilton’s pasture seemed jumpy.

Everywhere you go in Woodson County, black Angus walk right up to the fence, looking for food. Here they appeared skittish, darting away as soon as I approached the barbed-wire.

The entire herd repeatedly stampeded off as if they’d seen a ghost.

Their owner, too, was wary, and demanded to know why I was parked by his pasture, carefully observing his charges.

ACCORDING to the Yates Center Farmer’s Advocate, on the night of the abduction Hamilton claimed he and his family had been awakened by panicked cries.

Assuming it was merely his mischievous bulldog, Hamiliton went to the porch to scold him when he saw it: an enormous “airship descending over [the] cow lot about 50 rods from the house.”

He swore the craft was 300 feet long, dark reddish in color and cigar-shaped.

Hamilton and his son, along with other farm-workers, snatched up axes and sprinted toward the ship with its shining glass panels.

It was then they saw “six of the strangest beings [they’d] ever seen,” communicating in a manner none of them could understand.

As the farmers approached, the aliens shined their lights on the men, then quickly accelerated the craft upward.

As the ship ascended, it trailed a cable of sorts to the ground where it had snared an unsuspecting heifer, who balled and cried furiously as she was pulled from the earth below.

Too late, Hamiliton and his men watched in horror as the craft — with heifer in tow — shot into the night sky, then vanished into the northwestern stars.

SHELTERED in my own craft, I stared long and hard into that same cloudless northern sky.

After the cattle got used to me, they decided it was safe to come and take a look. They nibbled at the field greedily, yellowed fragments flying away in the wind whenever one would raise their head.

You could hear their mouths working as they ate, a kind of snuffling, sniffing, scarfing, as they tore tender greens from the earth.

One particular lady, her furry face caked with mud, came right up to the fence, then immediately turned her backside. Her tottering calf stood beside her, watching, too young yet to have a yellow tag punched in her ear like her mother’s.

Another suckled greedily from his mom’s udder, and both had become visibly agitated from the exchange.

In the distance, I could hear the creaking groan of an oil well pulling up and down.

Suddenly the train approached from the south, its blasting alarm audible in the distance.

I imagined its arrival was like that of Hamilton’s alien visitors: an enormous hulk of metal distorting the air as it moved, signals flashing.

Just south of the crossing I watched as the lights alternated red-blank, blank-red, akin to the airship’s colorful displays.

The ground began to rumble as graffiti-covered Union Pacific cars thundered by, and some of the cattle lowed in response.

Hamilton himself claimed to have been traumatized by the encounter, unable to sleep for decades to come.

“I went home that night,” he said. “But every time I would drop off to sleep I would see that cursed thing with its big lights and hideous creatures. I don’t know if they were devils or angels or what, but we all saw them and my whole family saw the ship and I don’t want any more to do with them.”

Perhaps this mostly had to do with what happened to his cow.

The morning following the close encounter, Hamilton ran into a neighbor, Lank Thomas from Coffey County.

Thomas had found the mutilated body of Hamilton’s cow.

Thomas also claimed there were no tracks of any kind, such as those of a carnivore who could have been blamed for the violence.

IN ORDER to assuage the skeptics, Hamilton obtained the signatures of local political figures and others with high reputations to testify to the veracity of his claims.

Such personages included the sheriff, district attorney, postmaster, multiple pharmacists and the register of deeds.

Because Hamilton was known as someone with a morbid sense of humor, as well as a prankster and spinner of tall tales, most folks around the area knew the story to be a hoax.

Soon, however, large U.S. and British newspapers — including the St. Louis Globe-Dispatch — began to reprint the tale and it became an international phenomenon.

Today a quick fact-check reveals that in spring 1897, tales of Unidentified Flying Objects were sweeping the globe. Hamilton’s may have been the first to include the theme of cattle mutilation.

At the time, however, some folks were taking the legend as seriously as any other claim made in the papers, unable to discern between a fantastic or “yellow journalism” narrative made for the sake of entertainment and those designed to inform.

Ironically, making such a discernment is still our task today as citizens of a digital world, as we're compelled to sift through mountains of disinformation in order to locate the truth.

To refuse this task is in turn to forsake ourselves.