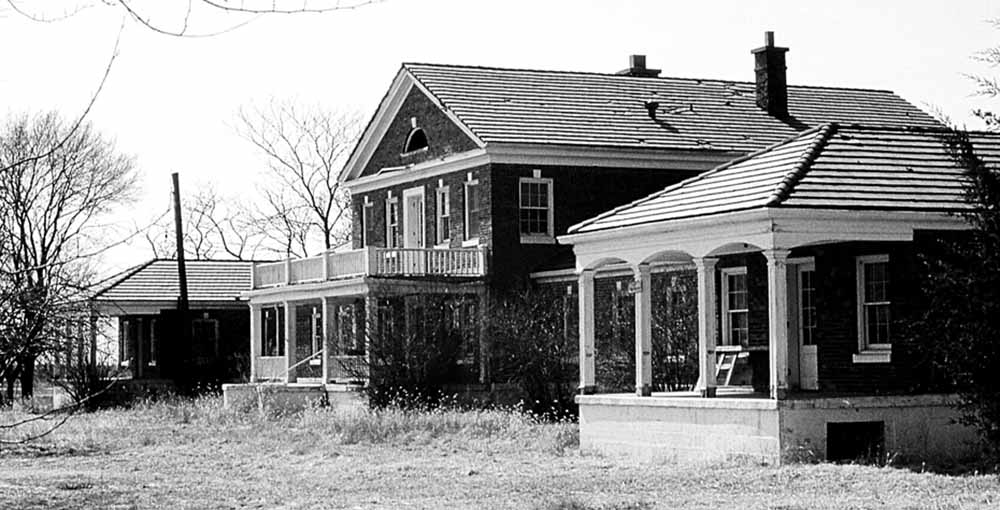 Few traces remain of the Allen County Poor Farm. Some descriptions set the scene as idyllic with peach and apple trees, but the 'inmates' often came from bleak situations.

What social and moral duties we have toward the poor, the disabled and the elderly are perennial questions, but perhaps surprisingly, they dominated public discussion when Kansas was in its infancy.

One finds an answer to such questions, or at least its remnants, about four miles north of Iola on farmland once known as the Allen County Home, or as it was known by most, the Allen County Poor Farm.

Not to mention the ghosts, whose sadness and emptiness seem to echo on the prairie wind.

There are references to the poor farm as early as the late 1860s, when the editor of the Register advocated “that such a farm should be at once put in operation.”

Rather than any ethical argument, they simply pointed to the cheap cost of land, and contended that the institution might not only be self-sustaining but even profitable.

Such appeals must have worked, for by March 1872 county commissioners passed a resolution stating that “all paupers and charges upon Allen County, shall be conveyed to and placed in the care and custody of the Superintendent of the Asylum, for the poor of Allen County.”

Soon after, an idyllic scene emerges. A caring physician named Driscol had taken charge, new buildings popped up and the peach and apple trees were blooming.

By 1911, someone “who visited the poor farm … suggested the name of the farm be changed. Halting at the gate of the well-kept farm, surveying the broad acres green with growing grass and gardens, stocked with fine fat cattle, hogs and chickens, he commented it was more like a pleasant country home.”

Yet many starkly contrasting reports exist, such as a mention in the 1927 Register to the effect that: “trustees and others should not misrepresent the accommodations of the poor house. There are no changes of clothing kept for the inmates, nor is the house kept as a first class hotel. Some who have recently taken lodgings there are said to be sorely disappointed.”

Standing in the pasture south of the farm, watching the storm clouds gather, I found myself wishing someone remained to provide a picture of what life had truly been like there, to say whether the peach trees had made up for any shame, mistreatment or other indignities that might have come along with them.

Indeed, one dreams “inmate” eyes watching farm buildings burning at various points across the years, and wonders if they were accompanied by sorrow or strange elation, feelings of vindication by those pushed to the margins of society for being “abnormal.”

SO WHO were some of the “inmates” at the poor farm tended to by “the overseer,” those who had been categorically prevented from participating in society and perhaps disciplined and punished in the name of remaking who they were?

The infamous Daniel Boomhover was tried for insanity in 1876. “The jury returned a verdict of ‘unsound mind,’ but failed to find him a fit subject for the insane asylum. He was sent to the county poor farm.”

Ellen Freet was a 50-year-old woman whose health had been failing rapidly and had no place else to go.

Richard White, too, had been quite ill for some time, “with a decided disposition to dropsy.” He died on the farm at age 63.

What is most remarkable about these entries is the fact that they exist at all, and list proper names, as concerns over privacy would later make any records of this kind quite scant.

What few entries do exist, however, fascinate and draw us in, often calling us to weep as well as occasionally laugh.

One such unintentionally humorous note reads: “Humboldt Township sent 17 out of the 32 inmates of the poor farm, during the past four years. Just a little over half the total number from one township looks curious.”

Other cases are far more bleak, such as case after case where young mothers in poverty (often abandoned) are noted as giving birth there, or “foster” children who were forced to take up residence and eventually be “bound out.”

There was also significant heartbreak and anger afoot, such as in 1900 when “Oscar Eckler was found in the billiard hall playing pool. It was discovered he had yet to pick up his three children, (ages) 3, 6, 8, from the poor farm and so Allen County still pays the board for the family.”

Perhaps the most detailed description of any “inmate,” though, is connected to Frone Wetke.

Wetke was found in a barn near Humboldt, and could neither speak English nor explain himself and his circumstances.

All anyone could get out of him was that he’d perhaps escaped from military service in another country.

Wetke was given work on a local farm, but “showed signs of insanity and was turned over to county authorities.”

Bound for the asylum at Osawatomie, he was turned away due to overcrowding and so the judge ended up “removing him from the jail to the poor farm.”

In less than a month, he escaped. I dreamed him stealthily creeping across the same field in which I had stood, as he frantically looked about for anyone who might hinder his passage to freedom.

Is it possible that today, with a greater understanding of post-traumatic military stress combined with a German translator, Wetke might have met an entirely different fate?

What does this case show us about the nature of diagnosing pathology and “insanity”?

SPEAKING of fate, southeast of the farm one finds several white metal crosses near the highway, which reportedly reveal the location of the poor farm’s cemetery.

As a light rain began to fall, I carefully examined the ground near said crosses, looking for indentations in the earth, any tangible proof that the memorials placed there did in fact denote a graveyard.

Various records and testimony over the years make it fairly clear that a burial place existed on the grounds — such as the death notice of John Newton Watson in 1912  — but as evidenced by dust-ups over wooden memorial markers and land-ownership as late as 2009, its location has yet to be absolutely confirmed.

In a news story from 2010, one county employee claimed he’d determined a location of 38 graves based on a folk technique known as “witching,” a process typically used to find water, where one uses a stick to point to something underground.

Perhaps it’s time, then, in the name of county history, local curiosity and civic responsibility to borrow the forensic or archeological equipment necessary to definitively answer the question.

To include those “othered” for so long, and thus removed from the sphere of our concern, even if only after death …