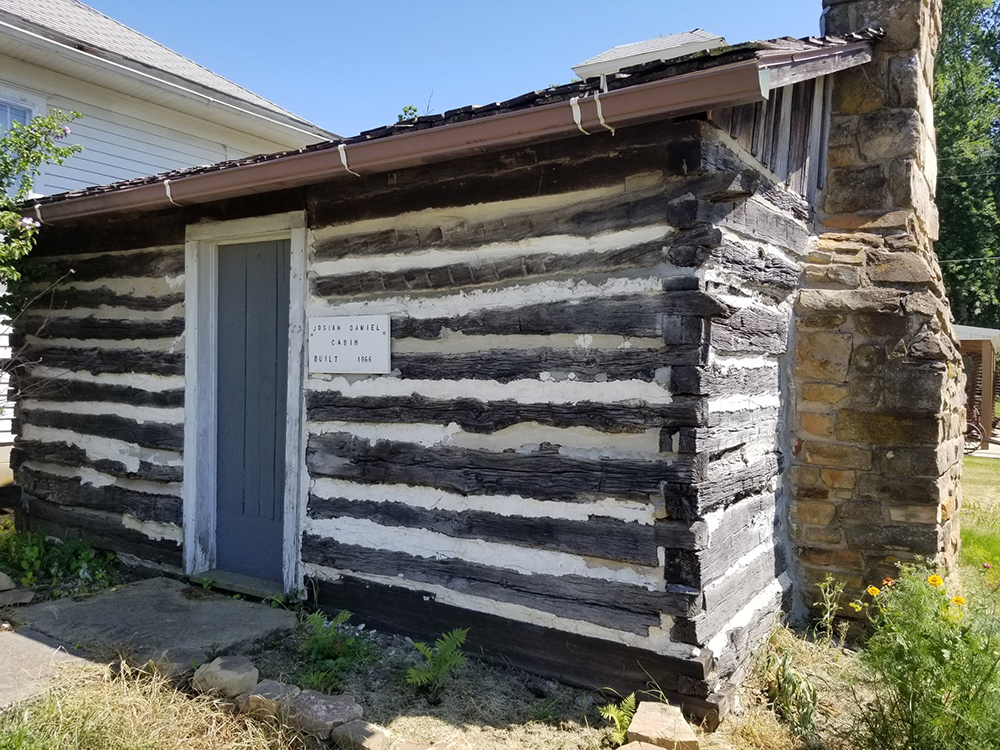 Trials of the Daniel family: The cabin on Big Sandy

A Yates Center treasure holds tales of hardship. The Daniel family cabin has been rebuilt along U.S. 54 in Yates Center.

The cold rain was falling in hard green drops as I rounded the forested corner that hides Big Sandy cemetery.

Cedar trees dripped in the morning mist, and hungry blackbirds were calling near the rectangular sandstone gate.

As I approached the entrance I paused, listening, straining not only to hear but to feel something of the place, confident that its ghosts would reappear.

Indeed, anyone who’s ever visited this place claims it’s haunted.

Ignoring the weather, I shuffled through the wet grass toward the rear of the cemetery plot, intent on visiting some old friends.

And there they were: more than a dozen unmarked pioneer graves with peculiar shapes that when taken together look like rows of teeth lining an open mouth.

The light was almost absent despite it being mid-morning, and the entire space was cloaked in purple shadows.

Unable to resist, I reached out my hand and ran it along the meticulously chipped sandstone surfaces of more than one stone, wishing the gesture would yield up a story from the soft earth below.

I stood for a moment at each one, waiting, smelling the air as it wafted from the nearby creek, which this summer had been exploding with dark red algae blooms.

At first, the only answer was the windy spray of precipitation across my face.

Eventually, though, someone called my attention as he is often wont to do: Josiah Daniel, 1828-1879.

Both he and his father’s family lived in these dark woods once brimming with wild mean hogs and lean black turkeys, to the south of the cemetery, surrounded with hundreds of indigenous people for neighbors.

They lived in an expansive log cabin, the diminished version of which now sits at the Woodson County Historical Museum in Yates Center along Highway 54.

The reconstruction combines pieces of the old Daniel place with the chimney from another cabin belonging to a pioneer named David Askren, and if you know its story you’ll never look at it the same way again.

WHERE others see a quaint and cichy little structure, imagining a warm hearth and “the sweet old face” of Mrs. Eliza Daniel as she pivots in her rocking chair, one can just as easily view a mute witness to epidemic illness and gross injustice.

In short, to hardship and death.

Summer 1864, while Josiah’s father was farming the Big Sandy valley, smallpox broke out among the native tribes who were living there, transmitted to them by whites.

In time, many in the Daniel family were afflicted by the red plague as well.

As a boy, Josiah recalled seeing the Osage and Muskogee people suffer untold horrors: their arms and faces covered in oozing sores, many becoming sick and blind and broken.

The Muskogee had been chased up from Oklahoma by Confederates two years earlier, and led by Chief Opothleyahola, had already endured the monstrous ordeal known as the “Trail of Blood on Ice,” a flight into Kansas rife with starvation, frostbite and broken promises.

Josiah’s mind was especially seared with the sight of what are sometimes called Native American “burial trees,” where a resting place for the dead is suspended in the air atop a biar supported by tall wooden poles.

According to certain tribes’ customs, these poles would be painted red or black, as were still-standing trees used for a similar purpose.

People would be wrapped tightly in blankets with their belongings, Josiah said, and placed where others might visit the deceased and speak with them.

While walking the forests along Big Sandy, especially when nearing a high hill or overlook, I nightmarishly dream that I can see them too.

THEY are buried all around me, I realized — these silent victims of a disease that claimed 300 million people in the 20th century, despite being eradicated by 1980.

As the revelation shuddered through my mind, I could almost feel the ground tremble with sadness and anger.

For a moment, it seemed that even the birds stopped singing.

It was then Josiah reminded me of another story, a trauma so etched on his brain that when interviewed years later, it remained at the forefront of his recollections.

Near the Daniel home once stood another seemingly innocent structure: a log schoolhouse where local children laughed and learned and played.

But when Josiah’s family was living nearby, a group of vigilantes tried three men in that schoolhouse for stealing cattle, despite most folks knowing the accused were really only guilty of having learned too much of the vigilantes’ own misdeeds.

After a sham trial lasting nearly three weeks, the accused were condemned to death and sentenced to hang in trees just north of the Daniels’ own home.

On that terrible eve, two of the men were brought into the cabin for their last meal, a tale not easily forgotten when entering the space today.

Standing in the woods, the rain began to abate, and I thought about the cabin’s seemingly cozy interior, how the table with its walnut furniture made in Humboldt looks set to welcome and embrace guests.

… Who are about to face lynching.

They eat slowly, methodically, savoring every particle as only those who are about to die can endure, as the hands of the antique grandfather clock grind inevitably forward.

Then those men swung back and forth just as slowly from the trees along Big Sandy.

Josiah said two were oak trees, one was a blackjack.

Fall of that year, the schoolhouse was moved.

I stood there in the cemetery, gazing into the treetops, watching as the cedars shifted in the once-delayed dawn.

The sun was rising high enough in the east that its sickly white light had begun to pierce the scene, as I focused on the branches as they ached and expanded, casting off the weight of water.

At my feet lay the dead, from pestilence and lies and time, murmuring as they too eagerly shifted to embrace the yellow star’s unceasing lack of judgment.