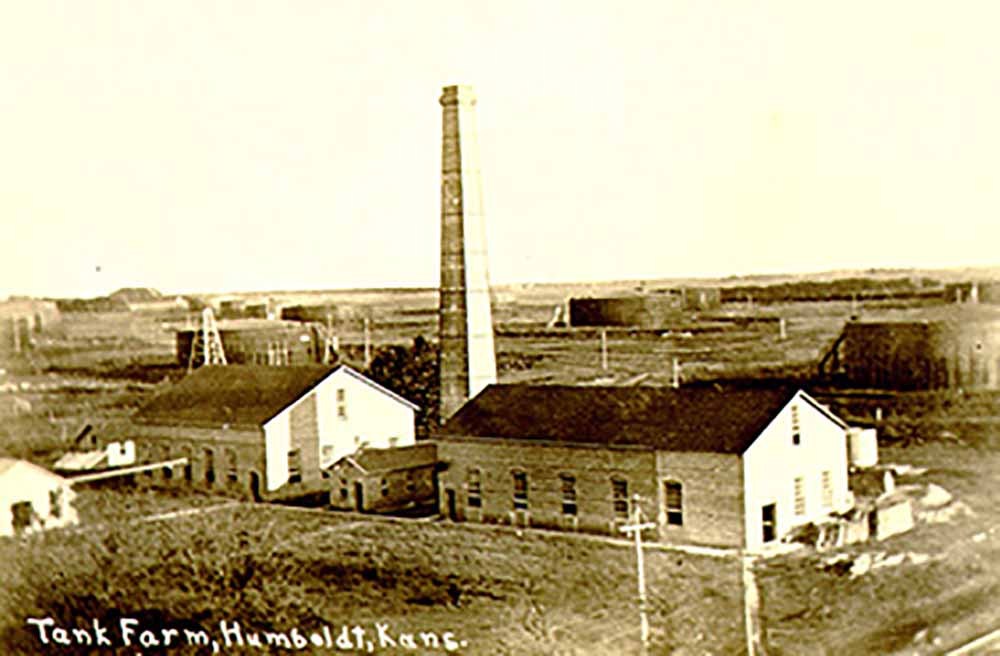 'Tank Farm' references the enormous oil tanks southeast of Humboldt that have been in operation since around 1904. It was once one of the largest tank farms in the world. But that's not the only historically significant feature along Delaware Road.

One of the most unusual names for any feature in Allen County has got to be Tank Farm Road.

Also called Delaware Road, this byway cuts straight through the county’s agricultural heart and is home to multiple historic sites.

“Tank Farm” is a reference to the enormous oil tanks southeast of Humboldt that have been in operation since around 1904, when Standard Oil built the first of eight 35,000-barrel containers along with a main pump building.

Originally known as the Durning Farm, by 1907 it had become one of the largest tank farms in the world, and boasted a storage capacity of more than a million barrels.

According to local Ken Johnson, in the 1930s “one of the oil tanks caught fire … and a cannon was brought in to punch a hole in the base of the steel Goliath so oil would drain into a reservoir.”

Seems like a great way to cause an explosion or catch half the countryside on fire.

Yet it was fire as well that caught the imagination of a young Bob Johnson, veteran Register reporter, when as kid he would head out to the tank farm to watch controlled oil burns.

“The fires lasted for days and melted the steel plating into grotesque shapes,” he recalled. “People gathered along the road to watch.”

Johnson also shared the tale of a fellow who took his own life at the tank farm, where he enacted not one but two grisly measures to ensure his success.

“He became so distraught that he climbed on top of a tank, put a chain around his neck, tied the chain to something on top of the tank, leaned over the side and shot himself in the head. He was found dangling along the side of the tank.”

What a way to go.

Journeying east to 2000 Street, you’ll next find the location of the fabled seven-arch bridge, a site that once graced the National Register of Historic Places.

The original structure is no longer standing, having met its demise in June 1999, but the mark left by its presence still seems to resonate, especially since the new “seven-square” bridge serves as its somewhat grotesque parody.

Indeed, if you close your eyes and listen carefully, you can still hear the echoes of horse hooves clattering across the 156-foot span.

Gottlieb Roehl, an immigrant from Brandenburg, Germany, conscripted his sons, Fred and Henry, along with other helpful neighbors, to complete the bridge’s masonry work over the course of a couple years, starting in 1898, in order to have better access to his farm across the creek known at that time as Schleicher’s Branch.

According to Register archives, “they used no mortar. The seven arches were constructed in such a way that weight from above compressed the wedged components of the arches more tightly together.”

Standing on the creek bank, I’ve dreamed Roehl’s sons and friends there, watching them work meticulously, hauling and shaping quarried limestone blocks, hoisting them into place one piece at a time.

If any ghosts shed a tear as the ornate structure was ultimately ravaged by the teeth of a backhoe, it was most certainly them.

Such was the fate of one the county’s most celebrated relics: to be unceremoniously ferried away in dump trucks.

Our last stop is at Delaware Road and 3000 Street, a place called Vincentville.

Today Vincentville Corner is mostly a landmark, but for a number of years it was the site of a service station and car repair shop.

I admit that when I first visited, I wrongly suspected it had been a country store and post office, akin to Charlie Brown’s in Mildred.

However, it’s actually christened after Robert Vincent, originally from Elsmore, who started the shop with his father around 1926. Vincent was also a mason and a methodist, and served in the LaHarpe Fire Department.

I wonder what he would think of the Vincentville site today, so overgrown with heavy vines that it seems as though it’s being ingested.

If you look closely, though, you can still see the words “Vincentville” emblazoned on the building there in chipped black paint.

Thus far, I’ve only come across one instance of “Vincentville News” in the Register archives, but I think it’s worth sharing if for no other reason than to smirk at its banality.

In November 1927, here are some of items reported:

• A new flue was completed at the service station, as well as a new stove.

• Due to the coming winter, Pete Burglund, an assistant at the Vincentville station, traded his open car for a coupe.

• “R.H. Bennett is improving nicely from the severe kick he received from his gun last week.”

Personally, I love the idea that a neighborly visit, minor injury, or new amenities were considered newsworthy items.

Or perhaps our lives in southeast Kansas are simply more chalk-full of excitement than we realize.