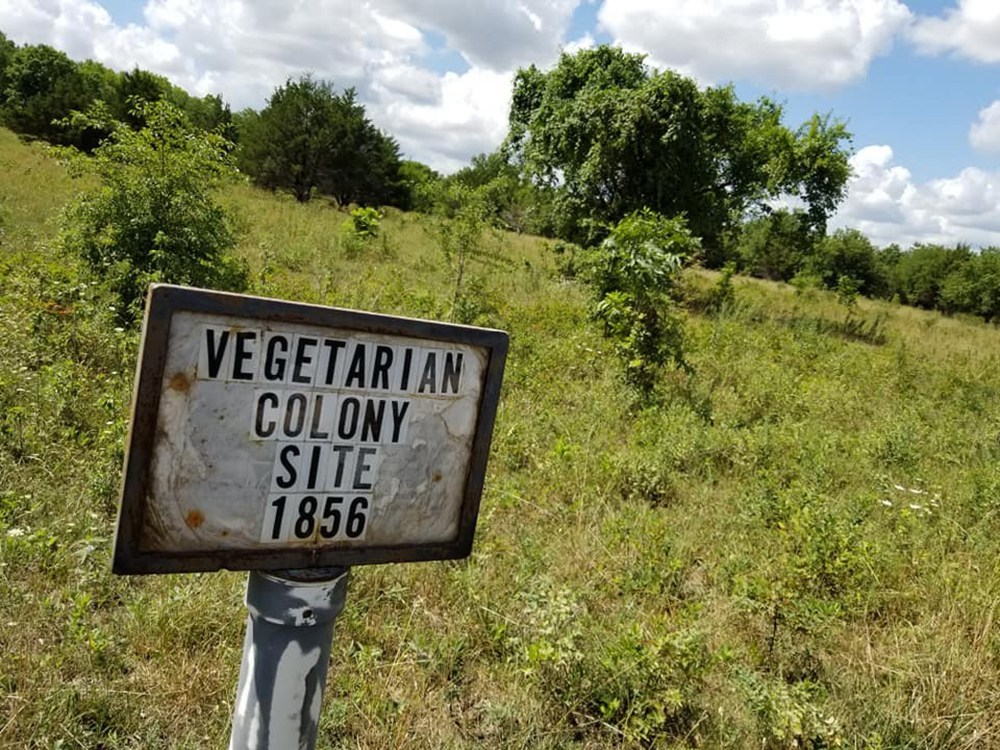 Sheltered from the incinerating blast of noonday summer sun, I was walking down the dry gravel bed of Vegetarian Creek listening to the insects whir and grind in ecstasy.

Hundreds of dragonflies were spinning about, and I was in awe at the sight of an enormous owl that launched from the dark trees overhead.

I watched as long brown feathers winged her southwards toward the Neosho River, as she surveyed the site below where teacher Miriam Davis Colt and her family endured countless sufferings on the prairie in 1856.

A British journalist (and perhaps unrepentant swindler) named Henry S. Clubb had promised the Colt family they’d find a utopia in the Kansas Territory, surrounded by others who not only practiced “abstinence from the flesh of animals,” but likewise purified themselves by resisting coffee, tea, tobacco and alcohol.

A city was to be laid out in southern Allen County according to what Clubb had termed the “Octagon Plan,” a 2,500-acre plot bounded by eight equal sides, with an additional interior octagon set aside for those who had yet to build homes.

When Colt and her family arrived, however, despite having bought shares in the Vegetarian Kansas Emigration Company, they found the site nearly as desolate as it is today.

As I walked the settlement area, I dreamed them there, exhausted and dirty, having come so far by covered wagon only to have their dreams dashed.

In her book “Went to Kansas,” Colt confided that “the ladies tell us that they are sorry to see us come to this place, which plainly shows that all is not right.”

They’d been promised heaven and instead found purgatory, a boundless prison of waiting and suffering, but where at least hope had not yet been forsaken.

As I watched the tiny yellow butterflies drunkenly sway, I recalled Colt describing the daisies on which they landed as “glowing,” and when I looked close enough, I too was silenced by their luminosity.

“The dark storm-clouds, (to my mind’s eye,) are gathering in our horizon, and even now they flap their cold, bat-like wings about my head, causing my heart to tremble with fear.”

Indeed, much of “Went to Kansas” is a study in anxiety and foreboding and grief, though certainly not without cause.

Yet it is also a saga of triumph, as when Miriam first rides a horse without sitting side-saddle, an image of her own growing independence.

That said, whatever your worst nightmare, there’s a fair chance that Colt and her family experienced it on that unassuming plot along the Neosho.

The weather, for one, was rarely an ally, as I myself was reminded while standing in the field on the scorching July afternoon.

Colt herself describes “floods of heat,” and remarks that “I can’t step outside the cabin door without burning my feet.”

When the clouds were finally merciful enough to provide relief, they were often accompanied by brutal storms and tornadic winds that Colt said “discharged … the artillery of the heavens, burning the earth and air with lightning’s fiery chains.”

On other occasions, the primary threat was less the environment and rather the beings who called it home, such as rattlesnakes that had a penchant for joining pioneers in bed to keep warm, or slithering under cabins in droves so loudly one could hear their bodies twisting against one another.

There were plenty of tarantulas, too.

Wolves or coyotes would often serenade the sojourners at night, and though such creatures are often quite skittish, Colt nonetheless had reason to write “I sometimes fear they will surround me, and ‘take care of me,’ before I can reach the house.”

Food was scarce. ”I live entirely on food made of corn,” Colt wrote, often boiling hominy or local greens (with salt) for nearly every meal. Or perhaps rice with a little sugar.

Surveying the native and not-so-native grasses of the Octagon field today, it made me appreciate the ability to discern which species were edible, even if they weren’t entirely appetizing.

Fortunate enough to spot an asparagus stem, I snapped it off and started gnawing.

PERHAPS Colt’s greatest peril were the other humans to contend with, including Confederate-loyal border ruffians that had recently attacked Lawrence (and who would later burn nearby Humboldt to the ground).

Indigenous people also abounded, and though many showed the Colt family kindness — such as cutting open and sharing a watermelon with Miriam — their appearance often set them on edge.

At one point, Colt sprinted across a field in the black of night, looking for someone to aide her family, believing native people would murder them for squatting in an abandoned native structure.

While walking the creek and field, I dreamed them, too, wondering what stories the Osages who lived as Colt’s neighbors had to tell about the land.

What sacred meaning did the Neosho River have, for example? Where was its “center” in this area, the place where one would be capable of looking in all four directions so as to narrate its unique and holy geography?

What would ultimately justify Colt’s ceaseless sense of dread, however, was the threat of incurable illness.

It had been a wet spring in 1856. The mosquitoes were buzzing and ravenous. And as I knelt in the creekbed to examine a uniquely-shaped stone, I felt a tiny needle pierce my arm that — given the scene — took on an entirely new and terrible meaning.

“The mosquitoes come in swarms,” wrote Colt. “I lay awake. I can’t sleep for their music and … try to keep the children covered so they won’t eat them before morning.”

As the oppressive summer dragged on, all the members of Colt’s family, including herself, would become infected with what was likely malaria.

“My husband feels cold and sick,” Colt wrote. “Mother and sister are having chills. … They are calling for water! water! water! At the same time.”

She would later describe the smell of death as akin to “decaying cabbage.”

Eventually, everyone whom Colt held dear, save her daughter, was taken from her. Her father-in-law, husband William, her mother, sister Lydia and son Willie would all perish.

Purgatory had transmuted into Hell, and it would seem husband William’s dream of ferrying children across the river had come to pass, though instead of the Neosho, it was the Styx.

“This is a long, long Sabbath day,” Colt had earlier observed, unwittingly predicting a time when it would seem as though the divine had utterly forsaken her in perdition — bereft in a pasture surrounded by the endless repetitious void of Kansas sky and burning grass.

“Such is prairie life.”