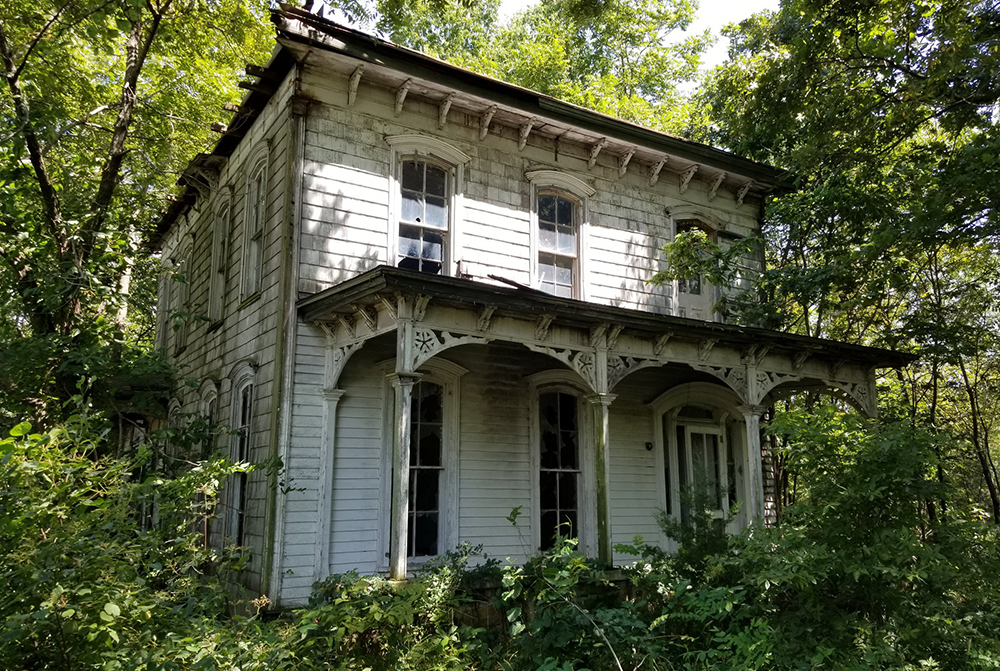 The Snow Family: A home for Snow without Winter

Years of neglect have turned one of the area's oldest homes, the Snow family home in Neosho Falls, into a state of elegant ruin. George Snow earned the moniker "Big Father" for his work as an Indian agent for the region.

Everything can change in a year, one falling of the snow.

You can lose yourself while finding your home, though shrouded in purple and bruise-black thunderclouds, after the passage of hundreds of miles.

You can see something for the first time, despite seeing it a thousand times before.

You can look in the mirror and find a stranger.

I imagine that’s how Maj. George Catlin Snow would feel today were he to gaze upon his beloved “Rockland Home” tucked away in the southeastern corner of Neosho Falls.

—The moment being akin to staring into the eyes of something alien, though nonetheless intensely alive.

It was a place his daughter Florence, in her autobiography “Pictures on my Wall,” described as “a comfortable place for the family to live … comfortable by pioneer standards.”

Florence herself was quite an accomplished writer, both of prose and poetry, and would later entertain such figures as Abraham Lincoln’s son, Todd, at the Snow’s second home across town called “Fair Havens.”

While still young, she’d gleefully tear across the open prairies surrounding the Falls on her little pony “How-How,” whom she’d received as a gift from native people grateful to her father.

In the spirit of such gratitude, I dreamed of George Snow looking upon the faces of indigenous peoples he advocated for while serving as Indian Agent for the region, when he’d earned the nickname “Big Father.”

Osages, Sac and Fox, Seminoles. Each with their own unique practices to navigate, to both respect and inevitably misunderstand.

I dreamed them coming up from their camps three miles south along the banks of the Neosho with its rich, dark waters, to visit with Snow at the house and at the mission built on-site prior to Rockland’s construction.

In “Pictures” she also elaborates on “the curious squaws who came to the house on endless made-up errands.”

“They proffered rather disconcerting jests in regard to [one] ‘Papoose,’ which happened to be myself, while five older children took things in their stride.”

Throughout such exchanges, one imagines the challenges of communication, the frustration and of course the laughter. The kind of humor shared simply through tone and gesture.

Or sometimes, anger. The rage that boils, seething in the face of gross injustice, violence and less-than-veiled sadness.

Quite a few brazen pioneers had been squatting on native lands, or rather on land that before that time had never been remotely conceived of as “belonging” to anyone.

I’ll admit I have trouble understanding such a concept, the notion that the earth itself belongs to any one person, that a geographical plane might be called “yours” or “mine,” merely because one has the requisite papers.

To that end, following a letter he’d received from Osage chief Little Whitehair, Snow wrote the federal government to call for removal of pioneers intruding on native lands and to enforce treaty boundaries.

Anything to stop the violence.

In a letter of his own, Snow wrote: “something must be done for these people at once,” so as to end “the high-handed stealing from them [so] that we may have peace on the border.”

Responding to Snow’s efforts, then-governor of Kansas, Samuel Crawford, not only callously had the order to remove illegally settled whites revoked, he directed that those same pioneers be armed with guns and ammunition.

At the thought, I could almost smell the blood and powder wafting through the air, a metallic scent that hung in one’s mouth and nose.

A drum-beat echoed almost inaudibly in the distance.

SOMEONE had opened the front door of “Rockland” since last I was there, nearly exposing the painted handprints of children that decorate its interior walls — as well as the splintered wood floor, where in places it looks as if it had been struck with a sledgehammer.

The entrance had recently been defaced with bright red graffiti.

An architectural relic nearly as old as Kansas itself (1862), the house had slowly been reduced to an elegant ruin, thanks to purposeful neglect and adolescent boredom.

Only a few decades ago the house had been abandoned, like the mission before it, which Florence described as falling into disuse “when the Indian Reservation law was passed and the old agencies were no more.”

When the people of the wind and plains were banished from their ancestral dreamscape, the place to which they were and remain inexorably bound.

At the reminder of such monstrosity, the trees guarding Rockland began swaying wildly, until they suddenly stopped and seemed to vibrate in the stark evening light.

Perhaps the house’s collapse is a bit of poetic justice, I thought, a kind of delayed revenge for having one’s cultures erased.

For those missions supported by the Bureau of Indian Affairs were often also sites of violence of a different kind, not of blood, but of heart and mind.

They were places of assimilation, where the aim was to “civilize,” to train the people of the wind and plains to live, speak, work and worship like whites.

To transmute a largely free and unbounded population of pantheistic hunters into Christian farmers, as Thomas Jefferson infamously advised.

Difficult to say which violence is worse — though Florence describes her father as “progressive,” so perhaps he should not be subject to such rebuke.

In fact, George Snow even took native people with him on his trips to Washington, D.C., in order to advocate for their interests.

Florence writes that one “keen First American had been greatly impressed with a dinner given in their honor, and during his first meal at home he said to his squaw, on finishing his hog and hominy, ‘Take him away!’ Then he called ‘Bring him back!’ repeating the two orders until he could eat no more of the ‘courses’ thus secured.”

That is, the chief was so impressed by the table service he’d received, he decided to request analogous treatment at home.

I doubt the chief’s wife was similarly impressed.

Thus breathing in the now-confused air swirling about Rockland one last time, I turned my eyes skyward, into its flat bright pastels, and walked away.

Sometimes it’s best to leave judgment to the river.