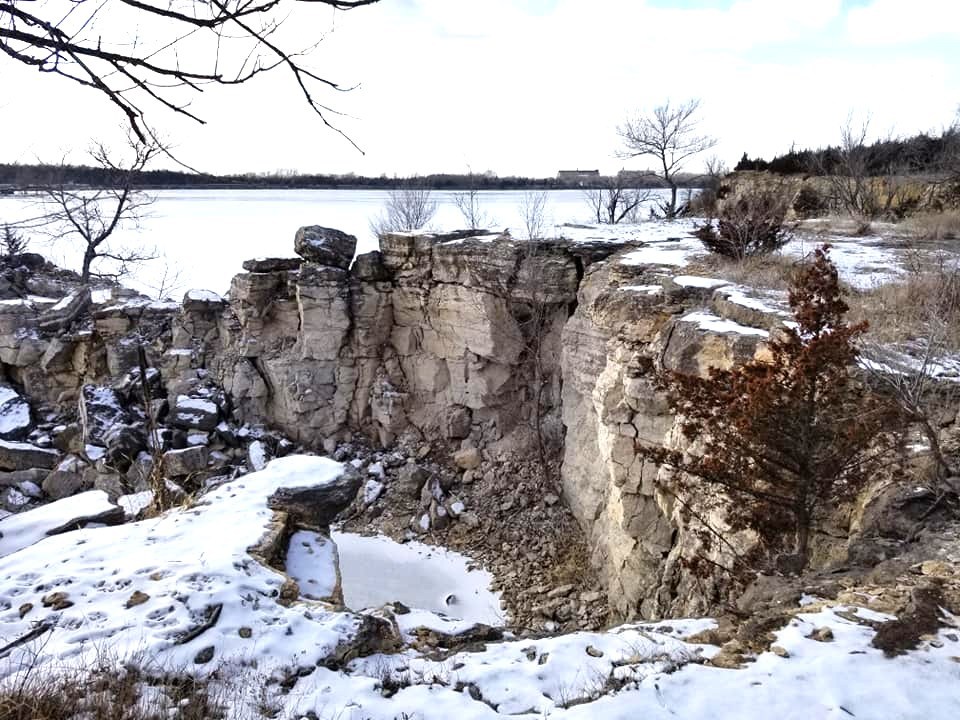 Swimming through an ancient past

Ever since I was a kid, I’ve always loved dinosaurs, fossils and all things prehistoric.

And believe it or not, Kansas is home to some of the most spectacular fossil discoveries in U.S. history, especially its western portion.

A fossil, by the way, is any preserved remains or trace of a once-living thing (usually over 10,000 years old); paleontology is the study of fossils.

One reason the state has so many paleontological treasures is because it was once the site of an immense saltwater sea that stretched the entire length of the North American continent.

Regarding evidence for these incredible events, one need only know where to look, as fossil-rich sites can be found everywhere from east of Lake Lehigh, south of Iola, to atop Biscuit Mound, a unique formation east of Toronto.

Most of what one can find in Allen and Woodson counties are the fossils of tiny marine invertebrates like crinoids, but in neighboring Anderson County, remains have been found belonging to ancient fish, reptiles and amphibians.

What else might be lurking just beneath our noses?

Try to imagine it.

It’s the late Cretaceous Period, last in the Age of Dinosaurs, and you’re standing ankle-deep in soggy soil that in millions of years will be named southeast Kansas.

The Western Interior Sea is currently retracted, leaving the territories of Allen and Woodson counties exposed to the bright light and heavy air, and you can see verdant swamp stretching in every direction.

Giant insects like dragonflies hum near the earth, and massive winged pteranodons cut the sky on enormous jagged wings. The biggest scorpion you’ve ever seen wanders by nonchalantly.

Plodding through the muck all around are countless strange and amazing creatures, such as gigantic amphibians, and in the distance are countless ferns and scale trees.

One plant called Walchia has been found in Anderson County, and in Woodson County, examples of ancient Scouring Rush have been retrieved.

This form of Scouring Rush was a bit like bamboo and could grow to heights of 60 feet. Local historian Lester Harding said he found a fossilized piece while exploring Dry Creek Cave and another along the creek bed in a gravel bar.

The remains of all these plants and animals would eventually form huge coal and oil deposits that would remain undisturbed for millennia until being tapped by human drillers.

Long before that, the fossilized remains of ancient beings would inspire awe and even a form of religious reverence in the lives of indigenous Native peoples. (This was especially the case with unusual extinct creatures found in what were called “Spirit Mounds.”)

While you’re visiting the prehistoric world and Western Interior Sea, I don’t recommend going in the water.

Although there are plenty of harmless critters around like ammonites, giant clams, crinoids, rudists, bony fishes and turtles, there are also a few less friendly inhabitants.

Enormous ancient sharks, along with dinosaur-like beings such as fearsome mosasaurs and long-necked plesiosaurs, are waiting patiently to bite you in half or simply swallow you whole.

In “Oceans of Kansas,” paleontologist Michael Everhart dreams a hungry mosasaur on the hunt, sneaking closer and closer to a flock of winged pteranodons, closing in for the kill:

“Slashing his powerful tail from side to side, he surged upward toward the body of the nearest bird. His mouth opened just before he reached the surface and quickly closed on the bird as his momentum carried his upper body several feet out of the water. Crushed by his powerful jaws, the bird struggled briefly and died.”

So how’d all this water get here, anyway?

According to Everhart, “the Western Interior Seaway was formed by the flooding of low-lying areas of the North American continent during a period of the earth’s history when there were no polar ice caps and sea levels were at their highest.”

In other words, with the temperature of the ancient earth too high to form polar ice, the excess water flowed into and covered certain landmasses.

Unfortunately, when it comes to finding fossil evidence connected to these prehistoric occurrences, we aren’t as lucky in southeast Kansas as they are in western portions of the state.

This is because the layers of Smoky Hill Chalk found in western Kansas, which have housed most of the truly awesome paleontological discoveries, have all eroded away here.

The surface rocks that might have contained dinosaur remains — Triassic, Jurassic and early Cretaceous — are also mostly gone from the state.

Of course, there are still plenty of fossils around to find, and our being situated in Kansas’ southeastern corner means we have an opportunity to more easily see some of the oldest rocks on the planet.

For as Everhart points out, “as you travel roughly 430 miles from St. Francis (Cheyenne County) in the northwest corner to Baxter Springs (Cherokee County) in the southeast, you are descending 250 million years through time (geologically speaking) at an average of about 580,000 years to the mile. It is almost like being in a time machine.”

That is, as you cross Kansas from west to east, you’re not only descending in elevation, you’re also passing over the top of geological strata that get older and older as you proceed.

So what do I need to do to start fossil hunting?

Thankfully, not much. Since as Everhart notes, “sometimes having good eyes in the right place at the right time is more important than being an expert.”

That said, he suggests reading primers on Kansas fossils to help with identification, but anyone can have a successful hunt if they know where to look.

For example, without much assistance on our parts, last year naturalist Randy Rasa and I helped Iola third graders search for fossils east of Lake Lehigh.

“Is this a fossil? Is THIS a fossil?”

You never saw someone so happy from collecting a bag of rocks.

Yet it speaks to that childlike awe that each of us still possesses, and that can be reactivated, when we allow our imaginations to transport us places we might once have only dared to dream.