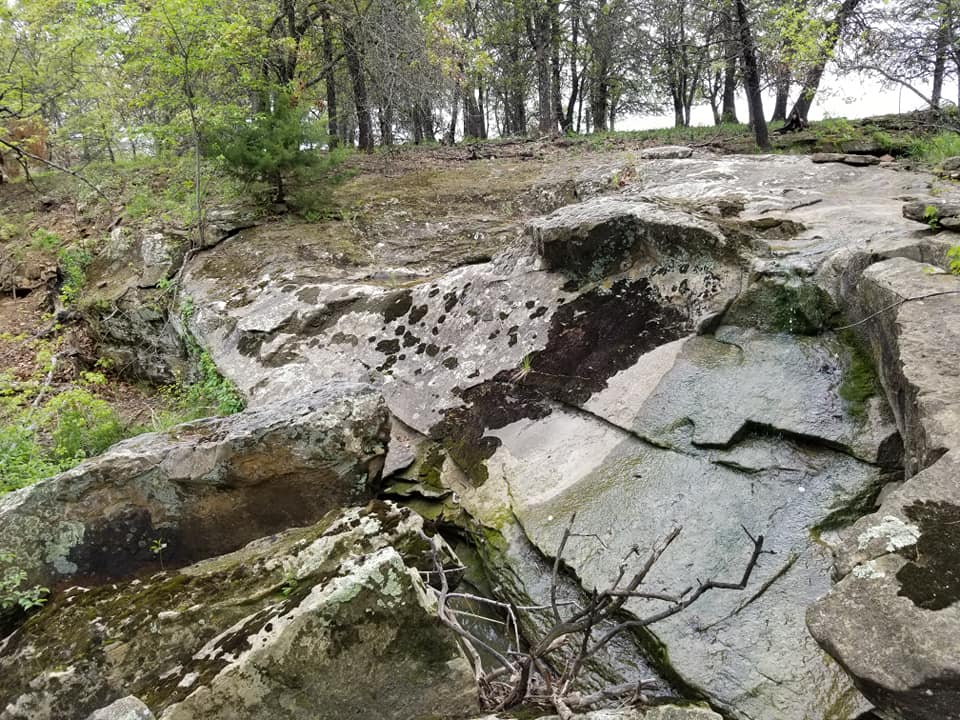 Stealing the land of the ancestors

Bressner Pasture in Woodson County carries a history of violence, but you'd never know it today. The field was once home to the Osage, and also served as part of K-State University's range research unit.

The afternoon sky was cloudy and dark as I knelt down near the base of the Bressner Pasture waterfall in Woodson County.

A gurgle of bubbles bounced from the tangle of sandstone boulders, and a meadowlark was calling from the field nearby.

Although the scene was one of radiant stillness and peace, I couldn’t chase away the nagging thought that this was also a scene of violence.

For not only was I attuned to the rhythm of those native people who once drank from this same pool; it was as if their blood had begun to flow from it.

Bressner Pasture, named for donor Willie Bressner, provides a concrete example of how, not terribly long ago, native people had their lands nefariously seized and repurposed.

For a time, the field was part of K-State University’s range research unit, where experiments were conducted on everything from grazing to burning.

And as Extension agent Dale Lanham explained, the goal is to “save the farmers a lot of money.”

Of course, it’s the Osage people who lived on this land for generations that primarily concerns us, how they galloped through the tall bluestem grass on painted ponies, bounding in an intricate movement forever linking them to the land.

After inhabiting “Kansas” since the seventeenth century, on June 2, 1825, the Osage signed a treaty saying that they ceded and relinquished all claim to their lands south of the Kansas River and west of “Missouri.”

They retained the right to continue living on the land as well, but would not remain for much longer.

When “Legend of Sleepy Hollow” writer Washington Irving was traveling the prairies around the same time, he marvelled at the Osage people, calling them “stately fellows; stern and simple in garb and aspect.”

He mentioned that they wore leggings and moccasins, but little-to-no jewelry; and he remarked on how the men wore their hair in long scalp-locks (that he compared to a kind of helmet).

Irving also added that “they had fine Roman countenances, and broad deep chests … [such that] they looked like noble bronze figures.”

Known to many as “blanket Indians,” the Osage kept mostly to their wigwam villages with the exception of annual hunts, when they would trek far to the west pursuing buffalo for meat and hides. It was a family affair, and everybody went along.

The Osage also liked to trade, and were especially partial to items such as flour, sugar and coffee. In the spring, the women planted corn and pumpkins in small patches. One delicacy included bread fried in rich buffalo tallow.

Like many folks then and now, the Osage also kept dogs, though these canines were much more feral and wolf-like than any breed we’d dare domesticate today.

When Abraham Lincoln signed the Morrill Act in 1862, it worked by turning land taken from tribal nations into seed money for higher education, with more than 920,000 of those acres being in Kansas.

Of course, the Morrill Act itself left out the fact that these grants depended on dispossession.

Lands that had once “belonged” to indigenous people were first obtained by the federal government through spurious treaties or seizures, then given as gifts to universities so that they could fund their building aspirations.

In the case of Bressner Pasture, land was seized from the Osage, then given as a gift to Ohio State University, which shows how the beneficiaries of land-grant colleges were often many miles removed from the lands from which they were benefiting.

“Children of elite families who graduated from these institutions had no idea that what made those institutions possible in the first place was the result of what was happening 1,500 miles away,” Leiker added.

Moreover, according to research conducted by High Country News, “tribes who were forced off of their land were paid less than 2% of what the states raised from selling that same land.”

Along with the Osage, the Kanza and many other tribes were robbed, with Kanza chief Allegawaho calling it the “darkest period in our history.”

It’s not hard to see why, for as Jameson Sweet, professor history at Rutgers argues, “you can point to every treaty where there’s some kind of fraud, … some kind of coercion going on.”

Had the native people of Kansas not been cheated out of their lands, today the same grants born of those seizures would be worth around $500 million.

Walking along the tall orangish bluffs near Bressner’s south end, I once again marvelled at the serenity of the land.

Bright moss and lichens were sprouting from every crevice, and the wind seemed to murmur as though it had a secret to share.

Tiny blue flowers had crept through a crack in the rocks and were vibrating subtly in the evening breeze.

To find my way back, I had returned to the creek and headed north towards the waterfall, calculating which path would meet with the fewest briars and thorns.

I found myself dreaming the Osage people all around me, following a similar path upstream.

Speaking in their native dialect, I could only listen to the inflection of sounds and syllables, but still it held my curiosity.

Then suddenly, the speaking became a cry of mourning, and the log drums began to beat, as they raised a lament for this land upon which a white man now walked.

No matter the degree to which he’d “nativized” himself by learning the tales of this ground, he still did not belong.

In that moment, it became clear to me that this place was forever theirs, and that no amount of violence or lies could sever the bond they’d forged.

We must therefore learn to live with their ghosts, and with the solemn and terrible truth that they carry with them.

(Many thanks to staff at the Kansas Reflector online newspaper for their research and interviews in Woodson County that laid the foundation for this article.)