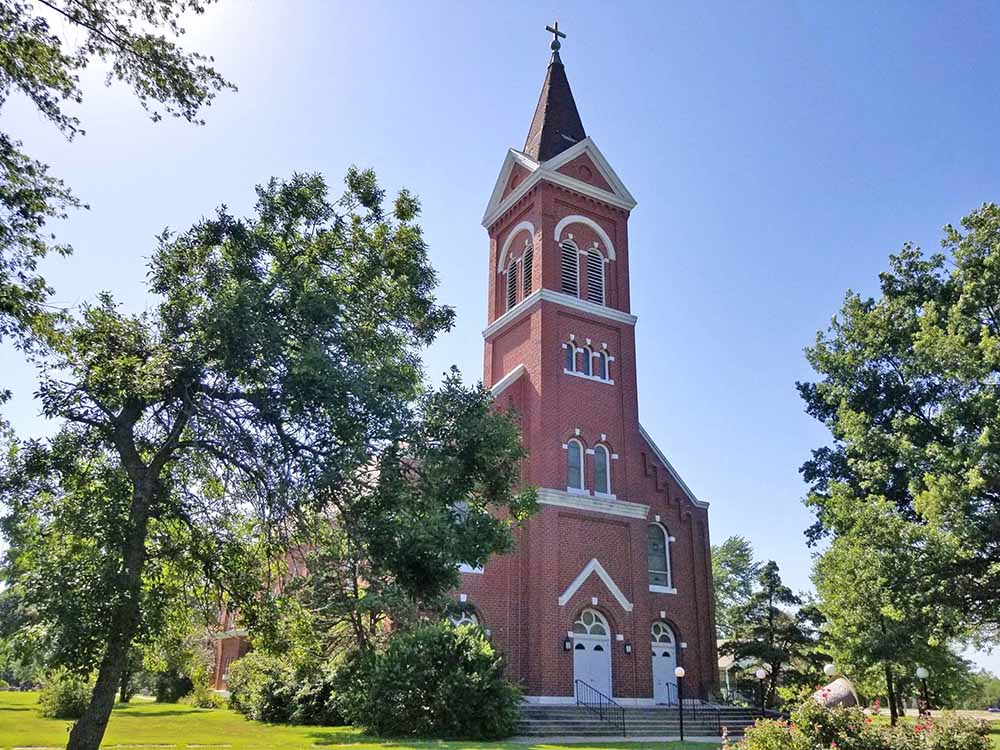 Ringing the bells of St. Martin’s

The regal Catholic Church in Piqua was dedicated in 1922 and named for Martin of Tours, a pacifist in the Roman Army who later gained renown as a bishop.

The bells of St. Martin’s Catholic Church in Piqua had just ceased ringing when I crossed the threshold and sat down in a pew to write.

The bells rang at sporadic intervals, not indicative of the actual time, their weight subtly shaking the building with each pass.

That’s how this whole absurd adventure began, you see, with those enormous turquoise bells dangling nearly 125 feet above the earth.

I had just arrived back in Kansas almost two years ago, my entire life ashambles, when I learned a local priest had mischievously dared my brother and I to climb the rickety ladder leading to the building’s apex.

What did I have to lose?

Deathly echoes swept all around me as I craned my neck upward and started climbing, wrapping my elbows tighter and tighter as the ladder swayed and creaked with every motion.

After a series of dark antechambers, I emerged in the tower room to find not only the impressive antique bells, but the corpses of a dozen round-faced owls that had been trapped inside the space and died.

Patterns made by their tiny bones made it seem as though Jehovah had done battle with the goddess Athena and triumphed, though in a combat perhaps less bloody than that which erupted when it was proposed the Piqua church be rebuilt at its present location.

Eventually tensions cooled, and on a gloomy, rainy day in November 1922, the neoclassical brick structure designed by Grant Naylor and Fletcher Bird was dedicated, with silver coins and newspapers tucked away in the cornerstone.

Along these lines, the Rev. Augustine Heimann had noted how “the economic situation during the past few months has become acute, and our own community has become seriously affected by it … We are filled with gloom and dread lest our ship might wreck.”

The ship ultimately managed to stay afloat, but with great personal cost to parishioners, who were contributing both significant money and labor to the effort.

They were mostly poor farmers after all, and paying for the Chicago-sourced design work, plated lamps, marble tables, stained-glass windows, precious artworks and porcelain statues was no small feat.

One of those weathered but stunning statues is of Isidore, patron saint of farmers, and another is of Martin of Tours, for whom the church is named.

Martin was a pacifist discharged from the Roman army for refusing to kill enemies in battle, but as a bishop, he gained renown by destroying non-Christian temples, holy sites and sacred relics (including a mythical pagan tree).

That’s why inside the church he’s depicted wiping blood from his orange and pink cloak, perhaps a metaphor for having vanquished those cultures deemed “unholy.”

On a lighter note, the church’s name can also be traced back to Mrs. Martin Klocke, who won a contest to name the church by raising donations, and who wanted to honor her husband and the saint for whom he was christened.

At that time, however, the brick church in south Piqua had not yet been constructed, and mass was still being held in the original church on the west end of town (near the small cemetery where the graves of adults and children are segregated).

That first Catholic Church in Piqua was dedicated in 1884, when Charles Kearful was also still the pastor for Humboldt.

The church building is long-gone, but the rectory still serves as a residence, with its near-perfect cubical shape and chipped white paint baking in the spring sun.

Less than a decade later, the ambitious Nicholas Fowler took over for Kearful, and almost immediately started building St. Mary’s Mission Church at Owl Creek several miles to the south as well as raising funds for the present St. Martin’s building.

All sorts of inventive money-making methods were devised, including auctioning off excess church pews.

For whatever reason, the thieves also scattered communion wafers all over the church, a somewhat cruel irony given that Martin of Tours was venerated for disrespecting and destroying the sacred spaces and objects of other religions.

Speaking of other cultures, the first Catholics who practised near the Allen-Woodson county line were regularly visited by Paul Ponziglione, a priest from the Osage Mission in St. Paul.

Ponziglione was fluent in Osage, and had set about trying to convert the natives farther south, but also set up a temporary mission in Collins home, which was likely the first site of Catholic worship in the area.

The only trace of these events is a tiny and secluded burial ground on Violet Road near where the Collins family made their home, usually referred to as Skeeters Cemetery.

Oddly enough, though, the most noteworthy person hidden in the little plot is not from the Collins clan at all, but a fellow by the name of Frederick Coleman.

Coleman had been working cattle in the area when a vigilance committee accused him of stealing livestock.

Young man though he was, in 1858 they nonetheless subjected him to a summary execution, lynching him for nothing more than the rumor he’d made off with someone else’s horse.

Over time, I’ve come to see Yohon’s story as illustrative, reminding myself that no matter what injustices I’ve been subject to in life, I’m still above ground and breathing.

But what is the effect of living one’s life believing things could always be worse?

For one, pessimism would seem weirdly antithetical to the image given us by St. Martin’s Church — though one certainly need not be religious to find inspiration in the iconic steeple that serves as a gateway between Allen and Woodson counties.

The tower’s story itself is one of growth and transformation, as its copper crucifix has been repeatedly retrieved, repaired and repainted, including after a tornado nearly snapped it off in the 1980s.

Although I have driven past the structure countless times, it never fails to fill me with a sense of possibility and joy, its magisterial lines carving out regal artwork against the endless depth of the Kansas sky.