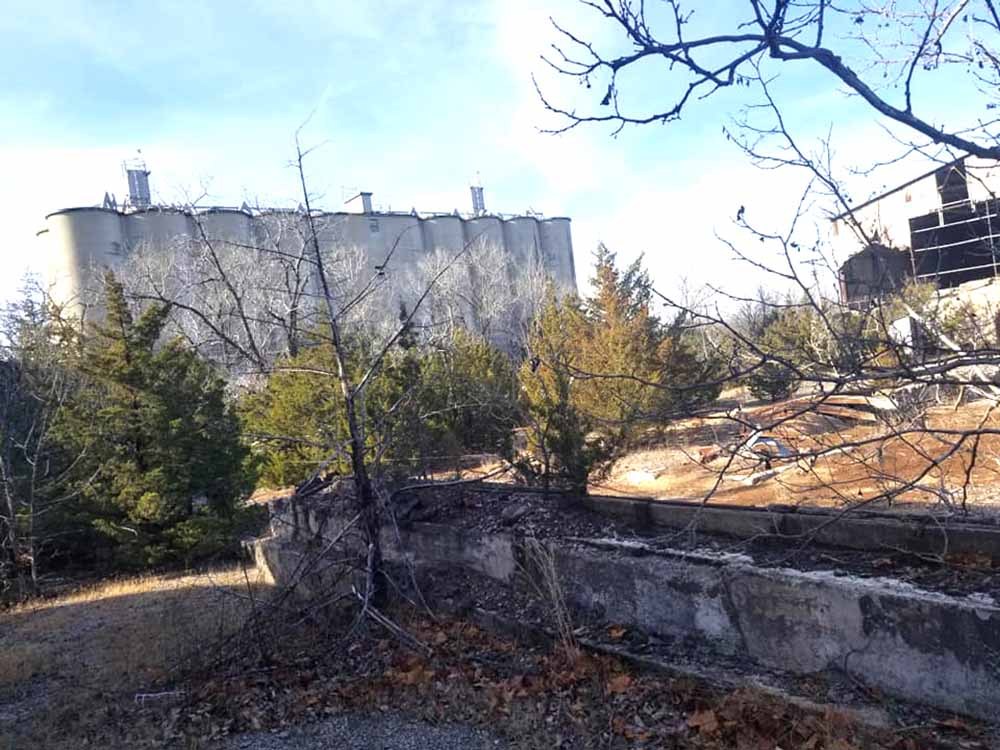 The LeHigh Portland Cement Company brought industrial jobs to Iola. What followed were decades of racial tensions among workers, and air pollution from the fine dust that settled over southern Iola.

Outside of my house, the soil remediation crew tore into the earth, seeking to remove harmful chemicals born of Iola’s industrial age.

The grinding sound was like some enormous angry insect, that horrible repetitious drone that every worker knows can be carried with them into their dreams.

LeHigh Portland Cement Company, I’m sure, was one of those places, where one carried its rhythm long after their workshift ended.

In 1900, Iola Portland Cement Company was the largest plant of its kind in the United States.

From 1900 to 1903, it was also the single largest employer in Allen County, and so had the honor of naming the factory’s housing settlement in honor of one of its own: S.H. Bassett, an official who worked there.

Not much of Bassett remains today, save a few foundations and “shotgun” style houses, which earn their name since it is almost impossible to detect an individual from out of a group.

The house-rows were all jammed together along the narrow streets, and the scene somewhat resembled an Old West boom town.

Like with all boom towns, this one had its trouble, one of the most notable being continuous racial strife accompanied by violence.

According to Daniel Fitzgerald, “in Bassett the black employees lived in a segregated section, and occasional outbreaks of racial strife shattered the tranquility of the community.”

He adds: “such incidents were not unique as they occurred in many communities where industries hired black and foreign labor in order to cut employment costs.”

In short, a town like Iola came into existence through an industry like Lehigh, and Lehigh profited countless sums through its exploitation of workers (of all colors).

That industrial violence then became racial violence, as different racial and ethnic groups ended up pitted against one another for the “right” to work.

Most shockingly can one see such racial violence erupt in an incident where, Fitzgerald notes, “occurred when the native white workers [in Iola] forced thirty-three newly employed Italian workers to leave town.”

This reportedly took place with several shots being fired but fortunately no one being killed.

As Fitzgerald so succinctly notes, “the cement company officials strived to treat everyone equally, but not all things were equal to all employees.”

1907 was a peak year, but one connected with frenetic financial panic.

In sum, “the cement industry overproduced, the market was flooded with cement, prices dropped, and construction slowed down.”

Bassett would before long find itself in the throes of an “identity crisis” in contrast with Iola. Who it was, was falling apart as to its own identity and name.

A lot happened in the preceding decade for things to get to this point, though.

Iola sold out to Portland, and not long after concrete highways were being constructed all across the U.S. with cement from Lehigh Portland in the mix. In the 1920s, they sold the Oklahoma Highway Commission a half a million barrels.

Yet out of all the Register records that leapt from the pages, the two that stand out most regard plant signage and air pollution.

Aerial photos exist where you can see both the quarry being excavated as well as the impressive lettered sign to the factory, as if it contained an almost Las Vegas style glitz and depravity.

What a contrast. The words “Lehigh Portland Cement Co” 230 feet across, on fire in the night with the reflection of 120-watt lightbulbs.

It’s blinding in the night, that point when the day’s exhausted sorrow collapses from orange-red into the horizon.

The men rush about as Christmas comes, in and out the factory doors, each one bearing the weight of expectation to provide. Gender wasn’t exactly fluid back then.

“A real man’s got to provide.”

It would take us a few more years to get beyond that point.

In the meantime, it was all dystopia, all apocalyptic tears of blood and some such.

On March 1, 1923, the Register makes mention of a 275-foot stack being built at the plant “which it is believed will so lift and scatter the fine dust arising from the plant that it will not long be noticeable in Iola.”

A dust was being produced in the kilns during the process of turning cement into other materials. So it apparently snowed a fine chalky dust in southern Iola, a late winter weirdness that temporarily pervaded the whole area.

Folks were apparently less litigious a hundred years ago, though, since “it is not likely anyone in Iola would ever bring suit to dispose of the dust, or that the court would sustain it. … The company has not been unmindful of the discomfort caused by a great many people and has been working on various plans.”