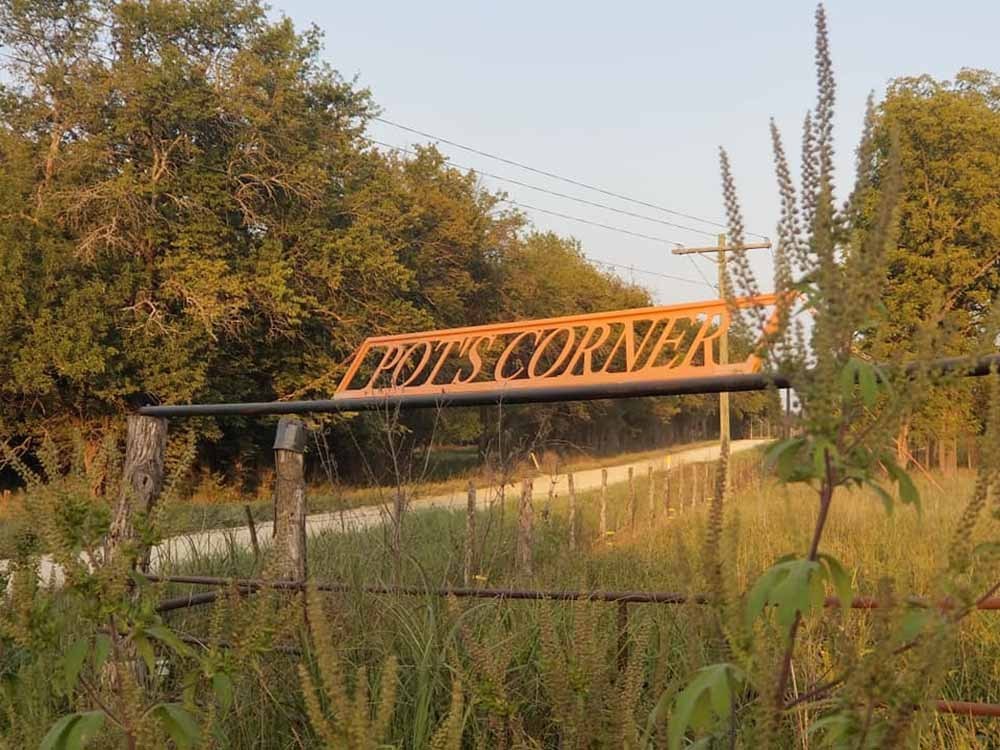 Pot’s Corner: This is not a pot

"It is what it is" ... except when it isn't. Pot's Corner, an intersection marked by chamber pots adorning corner fence posts, is an example of how you can take something crude and turn it into art.

There’s a saying folks in the Midwest often use, though I don’t recall it being nearly as prevalent when I was growing up here: It is what it is.

I can’t begin to tell you how much I loathe that phrase.

Some possible interpretations include: Nothing’s to be done about it. Nothing’s going to change. Deal with it. Accept your situation. Accept the pain. Move on. Etc.

It’s an ontology — a theory of existence — that succinctly and simultaneously articulates rugged, uncomplaining individualism with an almost obscene sense that the world simply cannot improve for the better.

Hence it doesn’t take much imagination to see how, as political, social and economic conditions have continued to deteriorate for most people here in recent decades, that loathsome phrase has only increased in its use.

It is what it is. … But what about when it isn’t? When something that exists has an existence so peculiar as to thwart traditional categories of understanding, even scrambling the distinction between being and not-being at all?

ENTER Pot’s Corner, the mysterious and historically laden intersection northeast of Moran at the intersection of Oregon Road and 4600 Street.

It at first appears to be an intersection like any other, with tall grass, weeds and thistles bristling about and gently shifting in the seasonal wind.

But then you notice the chamber pots, each one adorning a corner fence post, along with a recently erected sign reading “Pot’s Corner” in bright orange metal letters.

It’s at this moment, I think, one finds oneself transported to the margin and eventually the center of an enormous artwork, a place where everyday notions of “what is” begin to break down.

Most obviously, a chamber pot seated atop a fence post is no longer a mere “piss pot.” It has been transformed into something else entirely.

Here the lowly object is transmuted into something “higher” and worthy of artistic wonder and philosophical contemplation.

Is it what it is any longer?

SO WHO are the artist and curator of this strange exhibit?

As Dale Maley — who, incidentally, owns land on two of Pot’s Corner’s four corners — installed the neon orange sign in 2016, thereby officially setting the scene, it seems he is the framer or guide for our artistic journey.

Maley grew up in the area and his passion for local history led him to make a preservationist gesture of the place he recalls as standing out even a half-century ago.

By now, the number of vandalized or stolen pots he and his neighbors have replaced are likely beyond counting.

And the aesthetic genius behind the Corner itself?

It would appear southeast Kansas’ very own Marcel Duchamp and his “readymades” is a fellow by the name of Walker Albert Gillham.

“He started it,” explained his daughter-in-law Ruth, to Register reporter Rick Danley in 2017.

“He worked for the county and, at that time, they didn’t have mechanized equipment to work on the road.”

“He was clearing out a ditch and came upon this chamber pot, and so when he got to the corner, he just put it up on the corner post. And others, I suppose, followed his lead thereafter.”

Ruth Gillham further described her father-in-law as kind, hard-working and an avid fisherman. Unfortunately, he developed arthritis at an early age and had to use a cane or crutch for much of his lifetime.

Gillham’s grandson, Terry, confirmed the story,  adding that the inaugural pot must have been placed no later than the 1940s, as Walker died of a heart condition in 1951 when Terry “was only a toddler.”

WHEN Gillham’s inaugural pot was put into place, it no longer was what it was.

No longer a container for refuse, but art.

Of course, Gillham had no intention of making art and in turn making history.

He likely was never even aware of the Corner’s function as a place for providing directions to those navigating the country-side, unless perhaps county workers were the first ones to do so as they were laying out roads.

The point is that Gillham turned some thing into something that it wasn’t.

Many of those from the area remember Pot’s Corner as a place of orientation, of giving direction, from a time when fewer trees meant greater visibility over large distances.

“Turn west at Pot’s Corner,” folks used to say, and some around the Osage Valley still do.

“It was a mark,” explained Patricia Ensminger. “So kids there would know where their corner was to turn.”

“There was a family that had some [cognitively disabled] children in the area and they put big targets on their barn so the kids would always know where home was.”

Once again, then, a transfiguration occurred. What began as so humble an object (or series thereof) became a way of finding home.

Perhaps the lesson here is that when life gives us … lemons … it might just be the very thing that gives us direction.

Or when we’re in deep … lemons …, at least we can always go home.

Even if we turn the wrong way, we’ll likely still find something interesting.

Go north of Pot’s Corner and one finds a locally infamous fungal growth spreading up the trunk of a Cottonwood tree.

Go east and one finds graffiti on a bridge where a disgruntled 1930s WPA worker scratched “Damn Roosevelt” into wet cement.

Stay put and encounter the vengeful ghost of Pot’s Corner, the “disturbed” son of a couple who once lived nearby.

Perhaps the young lad is simply confused and upset wondering who exactly “Pot” is, and why they had to mark the corner as theirs (with an apostrophe no less) when he was there first.

AS I passed through the legendary intersection on my last visit, the sun had just begun to set and the sky had turned from deep blue to explosive red.

I dreamed Walker Albert Gillham there, in the ditch, fading light reflecting in his eyes as he meticulously moved about on three limbs.

Stooping down, he grasped the lonely chamber pot in his hand, examined it and walked to place it on the nearest fencepost.

What was once a repository for detritus, had in his hands become art, a signal, something that had become immeasurably more than it had been only moments ago.

It is what it is?

That’s just a failure of imagination.