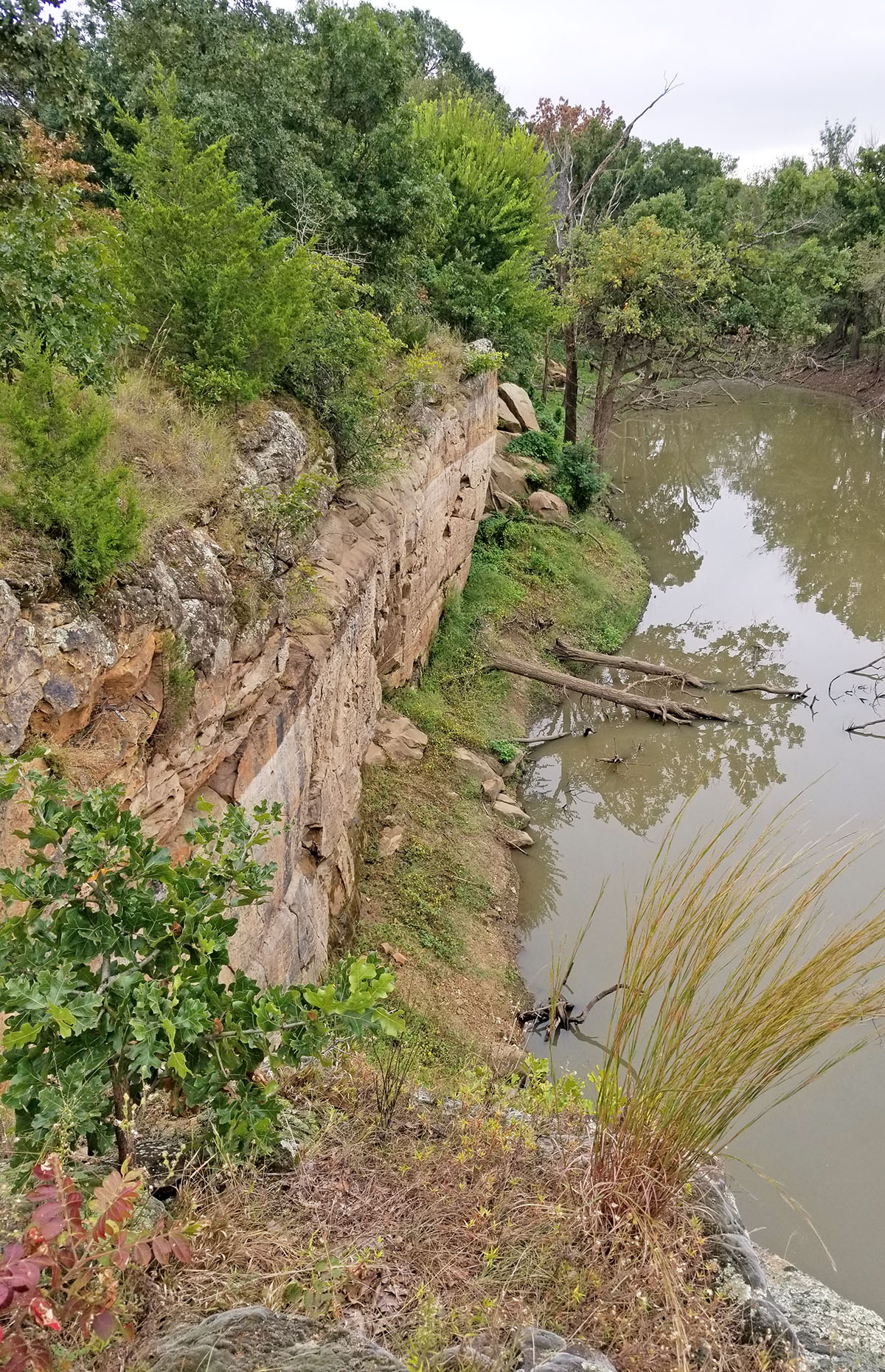 Pleasant Grove: The cemetery on the bluff

Halfway in-between U.S. 54 and Toronto near the banks of Cedar Creek rests perhaps the oldest cemetery in Woodson County, with its first pioneer-era grave dating back to 1857.

Once called Pleasant Grove, it has been rechristened Cedar Bluff, due to the immense sandstone rock-face hiding behind it to the west.

At one time there were few trees in the area, and it was possible to look out over this vantage for miles across the Verdigris Valley.

In order to reach Cedar Bluff,  I hitched a ride with locals Getty Tyner and Jessica Valentine. She smiles easily, gestures excitedly, and does most of the talking. He seems intensely focused on driving, but briefly interjects now and again, though his hushed and graveled voice is often difficult to understand.

The ash from their cigarettes slowly burns and takes flight as we approach the gate leading back into the pasture, and I wonder how the bouncing of the truck doesn’t spark a fire in the cab. Getty said he remembers when there were farms in these fields, both to the north and south of here. It’s clear his memory is deep, that he has ghosts of his own, and so is unsure of exactly what details to narrate.

Getting set ablaze, however, is not nearly as random and absurd a fate as that of the first person buried here. A young man by the last name of Foster, who’d been living at the Carlisle Branch settlement to the south of Toronto, was riding his horse up to Pleasant Grove when it happened.

Tearing through the cross-leafed post oaks on his mare at breakneck speed, he leaned one direction while his horse leaned the other, just in time to cause his head and face to strike a nearby tree. Dead. Just like that. I wonder if he’s watching us bounce along the dirt road. I wonder if he’s frustrated or simply bored.

Despite whatever audience might be present, we jump out and start to take a look. Most of the sandstone markers are worn and difficult to read, but that doesn’t dampen our spirits.

Jessica and I kneel at the grave of someone I have long been curious to meet. Julius Wilhite was born in 1797 and died in 1860, which makes his stone, a white marble slab, one of the very oldest in Woodson County. His relation, J.W., also buried here, was a member of C. Company, 10th Kansas Infantry, enlisting in 1864 when he was only 18 years old.

According to local legend, the younger Wilhite met his fate at the hands of vigilantes who claimed to deal out justice along the Verdigris River Valley. They’d accused him of stealing cattle, but others claim he’d simply come to learn too much about the group. … Enough that he was less a danger to them dead.

Jessica smoothed Wilhite’s grave with her hand, revealing a tattoo of a bird on her arm. Her simple act makes it seem as though she’s reaching out to comfort him, telling him that it’s alright, that he didn’t deserve what happened to him. That he was innocent.

Less innocent, however, is another ghost of this place by the name of G.W. “Wash” Petty, who was a sympathizer with the Southern Confederacy. His lieutenant was Robert Clark, perhaps the first white person to settle in the area along with his wife Mary Ann.

Given Petty’s political sentiments, it wasn’t long until trouble started brewing. Clark publicly accused Petty of conspiring to turn the company over to the rebels, which may not have been far from the truth as soon after Petty joined a group of Missouri Bushwhackers.

The dispute would have likely ended there, but when Petty returned to the Verdigris Valley years later, he found the elaborate tombstone of his dead wife defaced and ruined. White-hot with rage, he vowed revenge on the man he believed responsible, Robert Clark.

Looking for the stone belonging to Petty’s wife, I began applying chalk to graves, trying to make out the eroded letters. After coating the first in blue-green dust, an electric tingle trembled up my spine and I wonder whether continuing the ritual is wise.

After Petty returned to the Valley in 1866, one night he and three other men rode up to Clark’s log cabin near the river to gun him down in front of his wife and children. Clark’s wife is said to have recognized Petty and screamed his name in anguish as he thundered away. As for Clark, it is believed that, he too, is buried in the little cemetery on the bluff.

Though I’m curious to learn where Clark is buried, Getty tells me with a grim, wheezing laughter that even were I to find the stone, it wouldn’t be the actual grave, as the farmer who last cleaned up the cemetery moved the little sandstone markers in order to mow the plot, then forgot where each of them originally belonged.

Despite us not being able to find Clark’s grave, one of his sons eventually found Petty. Though Mrs. Clark had forbade the young men from taking revenge and continuing the cycle of violence, her oldest son relentlessly trailed Petty until apprehending him and having him arrested for murder.

Years later in southeast Woodson County, Perry Township, a man had left the train in Humboldt bound for Fredonia. Exhausted, he paused near a place called the 7-Mile House, a stopping-over point for weary travelers along the stagecoach line.

After securing a ride for $2, he would go on to confess to the driver, Jefferson Huff, that he was in fact Wash Petty. Petty said he’d recently been released from prison and remained furious at his attorney for not providing him an adequate defense, despite readily admitting that he’d indeed killed Clark.

Standing atop Cedar Bluff, surveying the brown-green ponds more than 50 feet below, I think about G.W. Petty and the pain he must have felt over all those years – the death of his wife, uncertainty over where he political allegiances lie, hatred for Clark following desecration of his wife’s grave, rage toward his attorney for failing to provide justification for what had happened, that is, by sharing a tale of retribution that in those days was grounds for being judged innocent.

As Getty, Jessica, and I stood in silent awe of this place, a flock of migrating pelicans began to soar overhead, their vast white wings bending and gliding along the wind. I hoped that Petty had finally found peace.