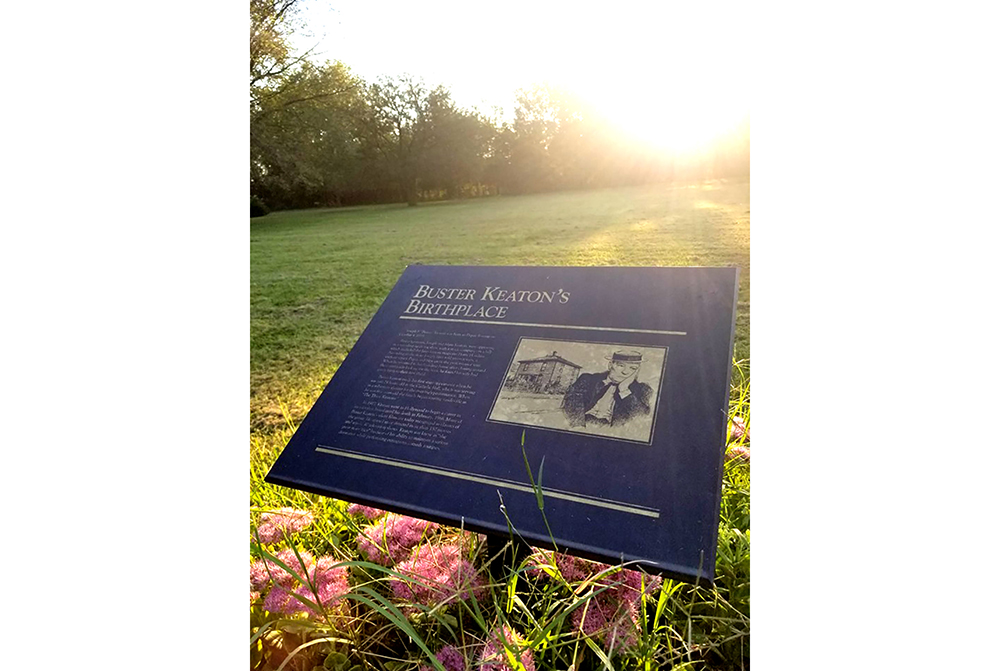 Piqua: Piqua from dusk till dawn

Piqua's history includes being the birthplace of silent film legend Buster Keaton. Its history is visible all over town — if you look closely enough.

DAY THREE — I was sitting near the birthplace of silent film legend Buster Keaton in Piqua when Gov. Laura Kelly’s state-wide “stay at home order” came through.

The COVID-19 pandemic sweeping the nation for the past few weeks had finally hit home.

In 1886, smallpox broke out in Piqua, whereupon the town was quarantined for six weeks.

Guards were stationed on all roads leading into town. Travelers were told to drive their wagons and carriages on through Piqua without stopping.

Adults were only allowed to leave home for trade. Children were forbidden to leave their yards.

Dr. J.L. Jones, the public health officer from Neosho Falls, set up a tent on the west side of town where he cared for the sick.

Many endured the virus and were left with scars. A young man by the name of Bert McKinsey didn’t survive.

Looking southeast toward the site of the railway junction that breathed Piqua into being — April Fool’s Day, 1882 — I imagined the train cars passing while the roads were patrolled by sentries.

The thought made me shiver, like the nearby purple clover trembling in the angry wind.

Earlier that morning I had felt a rush of excitement when I discovered the rectory from the original St. Martin’s Catholic Church was still standing and had been converted into a house.

That feeling, though, quickly transmuted into dread and a sense of foreboding.

I tried to distract myself by looking for remnants of the Piqua State Bank and department store belonging to Markus and Niemann, with its well out front. Folk said the water used to taste and smell like rotten eggs.

Old-timers claimed you could chew on it, but it was probably still preferable to eating June bugs. I only mention it as a bacchanalian by the name of Heckman used to do so for a lark outside the Knights of Columbus Hall.

Granted, drinking sulfurous water and consuming insects are probably preferable to the bitterness tasted by those who lost their fortunes when the bank collapsed in the Great Depression.

Given the crushing economic impact of COVID-19 so far, though, it may be that this is another disastrous past that’s repeating itself.

Not that Piqua will necessarily notice, as financial hardships long ago turned the little town into a somber study in absence.

The first thing everybody notices is how the graves of the 97 adults and 64 children are segregated, so that upon rising the sun first touches the Irish-German youth.

Folks used to call it the “Budde Place,” despite Bernard Budde not having lived (there) long enough to ever officially own it.

His 4-year-old son, Bernard Henry, drowned in a nearby creek, the place where he had told his father that he often spoke with angels.

I was sitting beneath the impressive concrete crucifix at the cemetery’s middle, in view of Bernard senior’s and junior’s graves, where it seems the number of people buried here ended up being fewer than planned.

I scooped up a piece of the cross that was at my back and examined it. There’s a large chunk missing near the top of the sculpture that seems somehow appropriate, imperfect, like the intrusion of humanness and embodiment into the dream of Wholeness.

It reminded me of when, in “Pilgrim at Tinker Creek,” Annie Dillard speaks of “the uncertainty of vision, the horror of the fixed, the dissolution of the present, the intricacy of beauty, the pressure of fecundity, the elusiveness of the free, and the flawed nature of perfection.”

For a cracked and broken perfectness was there: in the moth flitting in the grass at my feet, where I was once again surprised by the noise of this supposedly “sleepy” place: the low roar of cars on the highway, the rumble of muddy farm trucks along the gravel road.

The cedar tree in front of me had almost begun to conceal the sun’s glare, and wore its luminosity like a halo.

Perhaps heaven is glimpsed in these suspended moments when we feel love or awe in silence, reflectively, knowing it must end but believing it will come again.

Or perhaps heaven comes in a croon of notes from a meadowlark’s beak, complex and interweaving — the softly spoken spell of a ghost who tarries along with us through the disorienting trail of life.

One of the German graves there speaks of being held in the arms of peacefulness, a solace that in its ambiguity might refer either to God or Death.

DAY ONE — The frogs were chirping after the rain when I stopped the car in Piqua.

A cloud of blackbirds had burst overhead toward the northeast, and the air was just cool enough to suggest that spring had not yet conquered winter.

From here, between the defunct post office and foundation of Neimann’s store, I could see the place where silent film legend Buster Keaton was born, and where in later years he visited with his wife, Eleanor.

I wondered what he would have thought of the yellowed museum dedicated to his work that hides inside the Rural Water Station.

He’d likely say it’s important to keep a straight face so that the audience projects its own reaction onto the actor.

Unable to conceal its own response, a dormant catalpa tree near Silverado’s bar and grill reached up between the power lines on all sides as if in an act of rebellion.

FOR whatever reason, it inspired me to investigate the depot around the corner, repurposed to serve as a storage shed for the Grain Co./CO-OP.

I kept having the urge to look inside, though I’m sure it’s just an empty shell. But it is a husk with memory, and that is what matters. One must simply be still to know.

It’s odd, however, that in Piqua, no matter how meditative you try to be, you can nevertheless hear the roar of traffic on U.S. 54, and I’m reminded of how the first schoolhouse ever built here — Bramlette No. #27 — was so close to the train tracks that it had to be moved.

Sounds carry here throughout this living monument, like the cries of coyotes whose eruptions suddenly pierced the coming dusk.

Their wails tore violently at the air, echoed through the streets and then vanished.

I wondered if at one time, when it still retained its occupants, they’d have been as excited about the derelict chicken coop up north as I had been.

As the sun set, wrapped in cobalt, I was (again) reminded of Dillard, who spoke of being “cradled in the swaddling band of darkness. [Where] even the simple darkness of night whispers suggestions to the mind.”