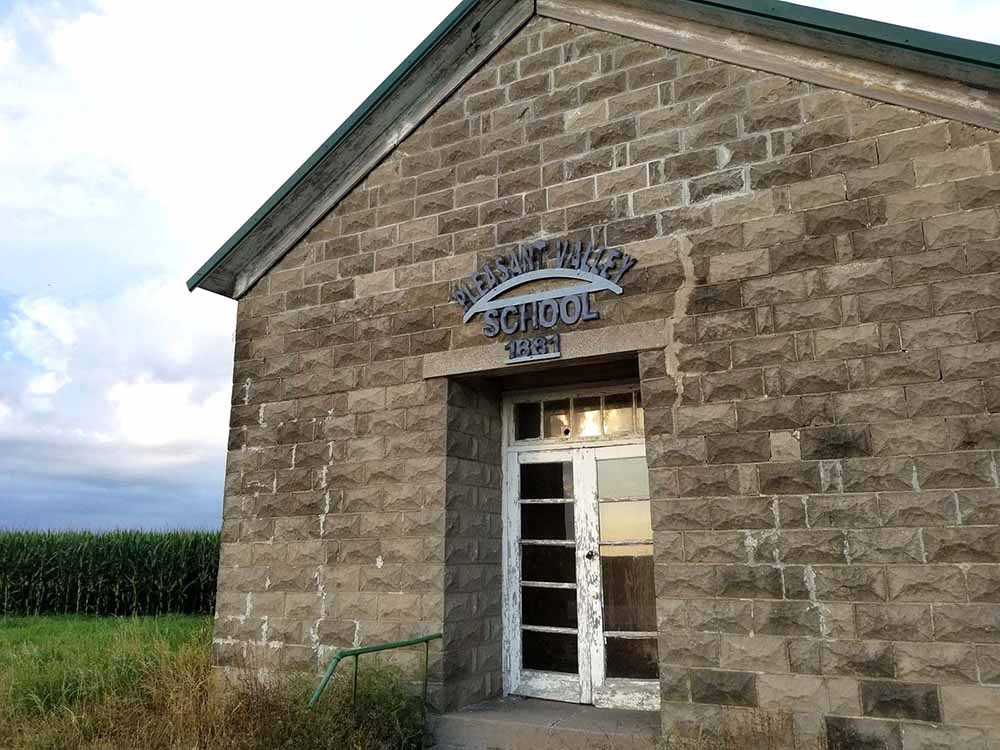 Petals falling from a Rose

The tiny town of Rose was once known as 'the hay metropolis of the world.' There's not much left of the town now, but its history falls like petals over those who visit.

Standing between the Pleasant Valley cemetery and schoolhouse in southern Woodson County, I lost myself in the immensity of the sky.

Always looking, looking … but for what?

According to the sign above the doorway, the sandstone schoolhouse has been surveying this same horizon since 1881, but the district is even older.

First known as “The Brush School,” as it convened in Alva Brush’s house, District 18 had its start in 1867 in a little room about a mile to the north.

Laura Dumond was the district’s first teacher at the subscription school, and would witness not only construction of its “box building” replacement, but the replacement’s replacement, the iconic sandstone structure that stands still today.

In “Memories of My Valley,” Edith Mentzer recalled spelling competitions and other contests between Pleasant Valley and neighboring schools, and noted, perhaps tongue-in-cheek, that “the debates became so interesting that it was necessary to limit the time for each.”

Pleasant Valley closed its doors to students in 1952, but has hosted countless 4-H meetings, weddings and family reunions over the years.

Yet its existence points to something even more intriguing nearby.

That something is the ghost town of Rose, founded in June 1870, which along with the rest of Pleasant Valley, is situated in the mouth of an ancient inactive volcano.

During the Cretaceous Period, last in the Age of Dinosaurs, veins of magma crept to the surface, and after the resulting formation expanded and collapsed, what remained was eventually termed the Rose Dome intrusion.

A similar expansion and collapse took place in relation to the town of Rose itself, though, and that’s what concerns us here.

Indeed, its population exploded after the Verdigris-Independence-and-Western railroad arrived in 1882, but by the middle of the Twentieth Century was a shell of its former self.

Over the course of 140 years, Rose went from numbering hundreds of residents, especially during hay season, to less than a dozen.

The name Rose comes from the daughter of the town’s first postmaster, George Trimble, who named the post office in her honor.

Today Trimble rests in Brush Cemetery, hidden northwest of Rose in the middle of a pasture. The burial ground started when Alva Brush’s daughter died suddenly.

I’ve only visited their graves once, however, as it requires tromping through grass six feet high and what feels like several feet thick.

Crouching amidst the tangle, I marvelled at blazing yellow sunflowers and the fact that the person who christened an entire town had met with such a clandestine end.

Nearby, the tall but similarly entangled headstones of Alva Brush and various Civil War veterans seemed to agree.

Back in Rose, I had stopped at the railroad intersection and was dreaming of the town in its literal “hay-day,” while horses muttered and sighed behind the fenceline.

Men of all ages had emerged from tents and were chattering at market about the dozens of train cars parked along the rail siding.

Others were just beginning to pull up with wagons brimming with golden feed.

One couple lingering at the blacksmith’s shop was approached by a spectral young man who asked if they’d seen Doc Higgins, as he was in “powerful need of a remedy.”

Residents darted in and out of the Rose Mercantile, operated by the Evans family, buying dry goods like flour and sugar. (Since milling flour yourself meant a multiple-mile hike to Humboldt or Coyville.)

One of the store ads read: “Ask old Gabe to fill your tank with Laughing Gas, and tickle Lizze’s carburetor.”

I’m not sure what that means exactly, but sounds like a wild time!

Following the train tracks north up the street, I paused in front of Rose’s most beautiful home, built in 1914, which first belonged to Frederick Dumond and his family.

Dumond was born on his parents’ homestead in a cabin not far away, and lived his entire life in Woodson County.

He sold heavy farm equipment and owned a general store in Rose, which was not far from the house and depot; he also kept watch over the post office and was a substitute carrier.

Dumond’s hay crews were legendary, and would compete with one another to see who could bale the most in a single day.

The record is supposedly 749, while using antique equipment, of course.

No wonder Rose was considered “the hay metropolis of the world.”

Although it’s gone today, another feature of town was the Methodist Church, where people received full-immersion baptisms.

Edith Mentzer said these were her first recollection of any religious services as a child, and added that “we learned songs on these occasions which linger in our memory. They are ‘Shall We Gather at the River’ and ‘On Jordan’s Stormy Banks I Stand.’”

On the flipside, she also recalled the year when the murderous “Bloody Benders” herded cattle across pastures not far away to the north.

The Rose depot, which saw the coming-and-going of so many travelers over the years, was long ago relocated to Yates Center, directly south of Pizza Hut on Highway 75. The hope was that it would become part of a museum.

On the east edge of Rose one can also find another, much younger, schoolhouse: District 17, made from rich red brick.

This district, too, got its start early, around summer 1867, and also held classes in a couple frame buildings before inhabiting a more permanent structure.

Per the original schoolhouse, a teacher named Fitzgerald remembered “there were large cracks in the siding where little rifts of snow would blow across the room.”

Snow aside, classes were held at “the Rose School” until 1960, and so there are still quite a few folks around who can recall attending.

Finding myself contemplating a schoolhouse once again, reflecting especially on my life as an educator, I gazed at the crumbling sidewalk and took hold of the thin metal gate to brace myself.

I dreamed the voices of children in a yard now devoid and empty, and picked one of the small white roses growing nearby.

Petals began to fall as I turned the blossom over in my hand, just as they had fallen from the Rose all around me.

… Towards the earth in silence.