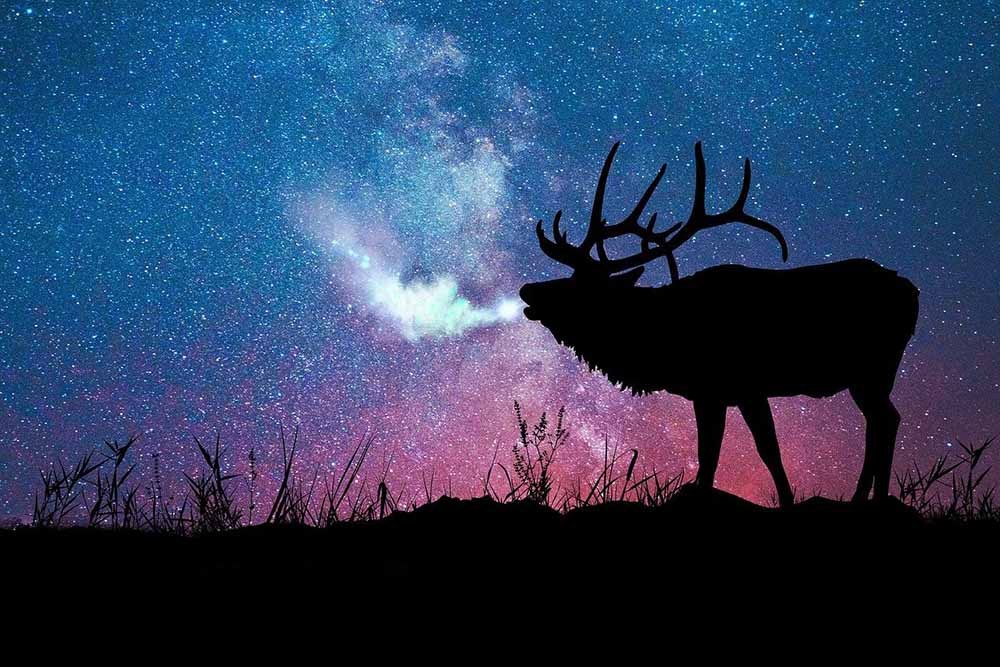 Osage mythologies: Between the spider and the willow tree

The Osage tell tales that connect their culture and find meaning in the world. One myth says an elk threw himself into the water and created the earth.

One day, an Osage chief was hunting in the forest, both for sustenance and for an image to inspire and guide his people.

After noticing the tracks of a giant buck, he whispered: “Grandfather Deer, I ask that you reveal yourself and affirm you are the symbol of my people.”

As the chief had become quite excited, he hurried less-than-carefully through the dense woods, his eyes fixed upon the ground. … until he ran smack into a gigantic spider web.

Angrily, he swatted at the spider who merely hopped aside and proceeded to ask what on earth he was doing, crashing through his web like that.

After the chief explained he was searching for an image for his people, the spider said, “Grandson, I can be such a thing. You may think me small and weak, but I am patient. I watch and wait, and eventually all things come to me.”

“Learn this lesson,” the spider added. “And your people will become strong indeed.”

The chief took heed, and thus the spider became one of the images of his people.

THERE IS a fine line between history and mythology, a line that blurs and deconstructs.

Yet myths are central to culture, and reveal how societies make sense of themselves and find meaning in the world. They even show one how to live.

(The most prevalent narratives for our own culture, in terms of reach and influence, are likely found in the Old and New testaments of the Hebrew bible.)

So certainly, the Osage people who forever belong to southeastern Kansas have experienced events recorded in written history (many of which depict subjection to tragic atrocities), but they also have orally-transmitted legends and stories that arguably provide an even more profound sense of their indigenous identity.

Let us dive into a couple more of these tales, then, and into the rich prairie landscapes to which they are inexorably tied.

Let us see what wisdom and religious/philosophical guidance they continue to provide, as they illuminate the culture of a people who, long before “us,” called this very place home.

(THE REVEALING of the earth.)

The Osages came from the sky, among the stars.

In contrast to the blue-black vastness of the cosmos, they called themselves “Little Ones.”

When the Little Ones decided they would descend to earth and become a people, after receiving guidance from four celestial beings, they followed the lead of young Golden Eagle.

The Little Ones and Golden Eagle passed through multiple realms, and eventually landed in the tops of seven enormous red oak trees.

Below the trees, unceasing waters covered the earth, so the Little Ones asked Radiant Star, the messenger, where they might find help.

Radiant Star brought back Great Elk, who threw his crushing weight down on the waters four times, until they withdrew and land appeared.

But Great Elk’s gifts did not stop there. He next took the different parts of his body, and transmuted them into facets of nature: tall grasses, rolling hills, twisting creeks and streams.

It is for this reason Great Elk is remembered as “Earth Maker.”

Once the earth had been exposed, the Little Ones divided into three groups, each with its own modes of survival.

One group became the Water People, after meeting the sacred river being. They were also known as the Givers of Names.

But there yet remained a fourth group, the Isolated, who had already been on the earth. And the Little Ones had to find them before becoming a complete tribe.

After journeying the land, crossing creeks and muddy rivers, ceaseless prairies, and looking deeply into an unending sky, they reached the Isolated and their village.

And the Little Ones were terrified. For they found a people both repulsive to smell or look at.

Throughout the village were the bones of dead humans and animals, excrement and buffalo guts smeared everywhere, piles of garbage, people fighting and doing indecent things, and both men and women with fearsome tattoos around their eyes and on their breasts.

After the leader of the Water People met with the leader of the village, talked for long hours and smoked the pipe, the Isolated Ones decided that they would join the Little Ones and leave that place of death, disease and decay.

Thus a new tribe was formed with four parts. They were from that day forth the Children of the Middle Waters.

(A MEANING in life and death.)

“What is the meaning of life? “Why must people grow old and die?”

Though he was young, such questions ate away at Little One, plagued his thoughts. He asked his elders for guidance, but their answers were unsatisfying.

Eventually Little One decided he would have to seek the answers in solitude, in his dreams.

The next morning, he set off across the open prairie toward the hills, taking with him neither food nor water. He kept walking and night after night hoped for a dream in which he would find a sign.

One night he came to a hill shaped like the rounded breast of a turkey, where a spring nearby burst from the base a giant elm tree. Surely this place would provide a vision.

But to no avail.

Weak with starvation, Little One was concerned, though not so much for himself but for his parents, and for those who might search for his dead body.

He decided therefore to follow a creek back in the direction of his village, and proceeded in this way until he collapsed among the roots of an ancient willow tree.

“Grandfather,” he beseeched the willow. “I cannot go on.”

It was then the willow spoke, its long tendrils swaying the wind: “Notice how you cling to me, Little One. Notice my trunk and its roots which hold firm to the earth. They are wizened and twisted with age, but they are strong.”

“Reach into the earth and find a way forward along the path of life.”

Inspired by the vision, Little One stood and began to walk once more. And with his village finally in sight he sat down to rest in the tall prairie grass.

Suddenly, an elderly man appeared before him. He was familiar to Little One, though he had never met him before.

After being silent a moment, Little One said: “I see a man in sacred clothing. His head is adorned with the fluttering down of eagles. I see a wise person with the stem of a pipe between his lips. I see one rooted in the earth as a willow tree. I see one who is still and at peace.”

The old man then vanished like a ghost, and Little One was given solace.

For in this image of his future self, he had glimpsed the necessity of age, and of the fulfillment of a life that must end in death.