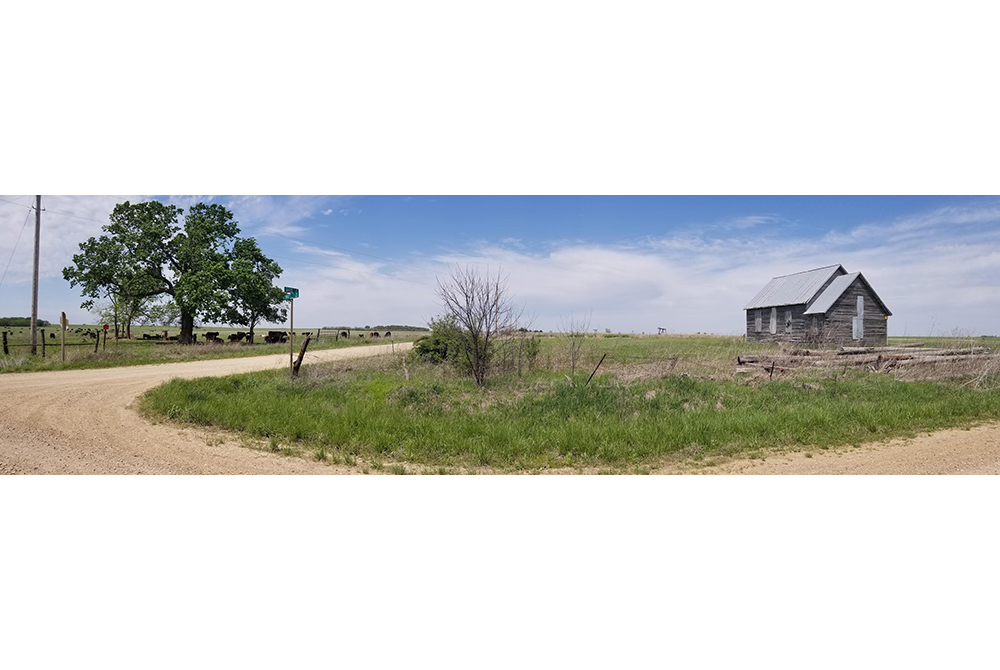 An old schoolhouse and cemetery in Woodson County mark Nikkeltown, a Mennonite settlement.

As the simplest shape in geometry, triangles are everywhere, the most fundamental of connective structures beyond the line.

In that sense, triangles are also indispensable to thinking, the form through which abstract concepts begin to emerge.

Cattle in a pasture. A pioneer graveyard. A crumbling rural schoolhouse. No three things could be simpler, right?

That is, until you begin to look closely, triangulate, tessellate.

In the pasture at Nikkeltown, the cattle were dirty white and rusty red and black, though not quite like some moonless night.

When first I arrived, they called out, those neopolitan bovines, heralding my presence, but soon their attention was drawn back to nipping the short spring grass.

Nikkeltown was once home to a group of Mennonites, whose German ancestors answered the call of Empress Catherine the Great (1763) when she invited Europeans to transplant to Russia.

The Mennonites thus fled compulsory military service in places like Prussia, and quite a few had come to call Russia home by the mid-nineteenth century.

The respite was only temporary, however, as in post-Catherine Russia, military exemptions expired after 20 years.

So once again, the Mennonites were on the move — this time, to America, and eventually, Kansas.

They steadily crossed the continent, heads hidden, every day praying for survival against sickness, starvation and temptation.

Around 1878, eighteen families landed in Woodson County, thanks to land-deals made with the M.K. & T. (Katy) railroad, and ended up living in a sandstone sheep-barn owned by wealthy Turkey Creek rancher Charles Weide.

As I stood there, in the triangle between cattle field and graveyard and schoolhouse, I could almost hear them murmuring to one another, or reading softly, in a three-fold combination of Dutch, German and Russian — a dialect termed rather unflatteringly as “Flat Dutch” or “Low German.”

INTERRUPTING the dream of voices, a small blackbird in the Mennonite cemetery had swooped in to perch atop a tall grave and was tearing mercilessly at a worm, thereby making it a grave for two.

How many millions of times has this happened on earth? Where the burial place of one living thing becomes the occasion for innumerable others.

Perhaps the entire history of life itself might be viewed in relation to death stacked upon death, producing layers.

That too, is how one makes a sod house — by sedimentation.

The German-Russians who’d made their home at Nikkeltown had learned the technique in their home countries, and it’d immigrated with them.

More than 20 “soddies” were constructed, and several continued to stand for generations afterwards.

The work must have been back-breaking: cutting strips from the prairie soil held together with bluestem grass, then one by one, placing them in strategic patterns and layers.

According to one local account: “These houses all had dirt floors, swept clean and hard. Sometimes the walls were plastered with a mixture of mud and straw. After the soddies were built for some time the heavy rains would to a certain extent wash the dirt away from the sod roots, making it necessary at times to cover the outside with the mud mixture.”

I dreamed them, then, in my mind’s eye, Mennonite pioneers working in the blistering, blinding sunlight, some in long sleeves and long dresses, floating about like mud-daubing wasps, filling cracks and joints with trowels and bare hands.

They, too, were making a triangle: gather straw, gather mud, apply to walls. Repeat.

I HAD become distracted when I noticed a sign hanging from the Nikkeltown schoolhouse nearby, but laughed out loud when, rather than reading “District #43,” “built in 1900” or some other relevant bit of information, it simply said in small yellowed letters: “No hunting except by written permission.”

What of hunting for remnants of the original sandstone school building, via written traces left behind by local historians?

What of chasing the ghosts of children calling out from an old school photograph: Willis, Barrett, Klingenburg, Opperman, Neufeld, Tallman.

Does that constitute permission?

The song of meadowlarks burst out against a gusting wind, and each time this collision occurred, I remarked on the openness of the scene surrounding me.

Above, was the stretching, torturous sky, which in Kansas consumes the possibility of conquering either time or space.

In fact, in Kansas, the sky is low as well, and reached to my feet and to the cattle’s hooves and perhaps even below.

Supposedly there are more cattle in Kansas than people, and as I sat between those hungrily tearing at the field, and the graves in what was once called “Nikkle’s Burying Ground,” I began to see their stout bodies in an overwhelmingly shadowy light.

Today, they strut and canter before the glorious Kansas horizon. Tomorrow, they’ll pass through human guts.

At least their lives have been granted the dignity found in a clear and distinct purpose, despite likely never fathoming it themselves.

SOMEHOW I have to find a connection, I kept thinking. Triangulate between cattle and cemetery and schoolhouse.

— One takes a concept, perhaps, and ideally, rolls it over again and again, covering it with saliva, until it becomes palpable. Typically, until it fits with what one already believes.

— One comes into the world, and in time, knows that life will end, that no matter how much one struggles and strives, there will come a point at which life is reabsorbed and returned to the earth.

Thoughts melting and sprawling into one another in some blue-black haze, like sticky juice on fingers produced from some of the first Mulberry trees transplanted to Kansas by the Mennonites at Nikkeltown.