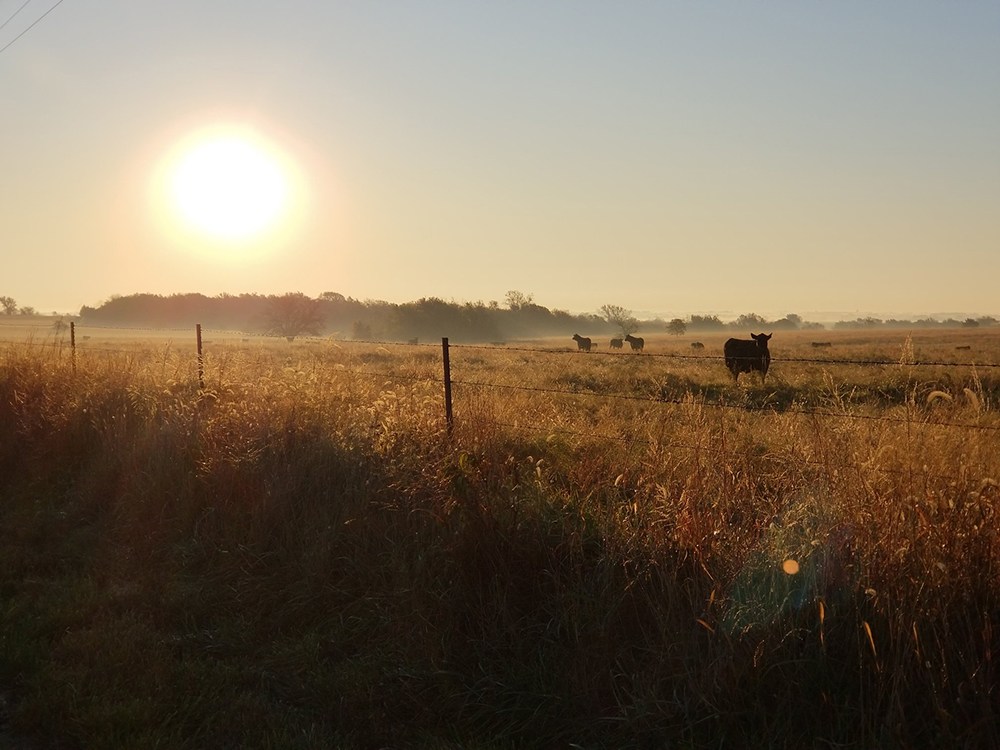 Nikkel-Dye: The pasture whose name I will not write

In northwestern Woodson County, just south of the German-Russian settlement known as Nikkeltown, lies a pasture.

It looks like any other pasture, really, with dry, brittle grasses swaying slowly in the wind beneath a sprawling cloudless sky.

But this pasture has an incredible secret, and an equally terrible name — a name I will not write.

As I sat watching that sky, the moon grew brighter and brighter, turning my skin yellow-blue, yet on I watched, waiting for it to tell me what I should do, explain how to relate the story of its complex and subtle blackness.

For eight minutes and 46 seconds, I watched, as a thousand fireflies turned on their lights.

In the late nineteenth century, around 1890, there was a ranch to the north of this pasture at one time operated by J.D. Payne, who’d come from Texas and brought along several African-Americans in his service.

Among those cowboys were Jack Oliver and his half-brother whose name is lost to history, though it was said he was half Osage.

Both were outstanding ropers and riders, Jack especially.

After Payne sold his ranch, the Olivers moved into a small shack on the pasture in question, each day stumbling home exhausted and sore from hours of working cattle.

Or perhaps following a pint of whiskey.

At that time they had begun working for Jim Dye, whose land stretched clear into Greenwood County, and whose last name provides a clue to understanding the name I will not write.

It’s not a question of giving color to fabric, that name, of dying, but to death, to the underworld and underground, like the basement dug in that pasture for which I have searched and not yet found, that eludes me like some bashful wraith.

NOW Jack Oliver, by contrast, was anything but shy.

In life, he was a seasoned bronc rider and legendary tamer of outlaw horses.

Once, there was a ferocious stallion near Gridley, which someone brought to the Spade ranch to see if Jack might not meet his match . . . or his maker.

The horse was saddled with a halter and rope on him, but no bridle.

Jack then pulled a silver dollar from his pocket and held it up to the light, let it glimmer.

With a mean grin he turned around and said, “Whoever sees this fly; it’s theirs,” then placed the coin in the stirrup.

Like white dynamite, the bronc exploded, thrashing with every muscle, its body extending and tensing like a piston.

Again and again it kicked its hooves out and back, and in lunge after lunge of otherworldly strength, brought all four legs from the ground, forcing Jack to lie back along its spine.

Swapping end over end, the mount bucked as if hellfire itself was licking its backside, and the slaver leapt from its mouth.

At last, exhausted, the stallion was forced to relent, hanging its head in defeat as Jack led him back to the astonished audience.

All Jack said was: “Guess he’s ready for use now.”

His dark face, long arms and rough hands were covered in scars from rides gone bad, as well as from knife fights.

One night, he and his fellow cowhand, Ira Martin, had gone to Gridley for some excitement.

During a backroom poker match, the liquor was flowing, the smoke was rising and Jack and Ira were winning.

In response, Ace Merrill from Gridley grumbled a racial slur beneath his breath, and in response it was all Ira could do to pull Jack away and across the prairie back to Payne’s ranch before he added another long white scar to his collection.

Jack had asked Martin for his knife. Honor was more important than living.

Jack was an angry man, and had come by his rage honestly though it caused him to race face-first into danger.

As I sat by the field named for him, though, watching as the moon reached the apex of the onyx sky, I dreamed him singing, perhaps while his brother played harmonica.

His haunting voice lifted across the brightening night, as a billion stars illuminated the vast ocean of a sky that consumed 360 degrees of horizon.

It wasn’t a beautiful voice, but harsh, full of pain and frustration and perhaps made coarse by more than a few hand-rolled cigarettes.

To the south a pack of coyotes began to join the chorus, their wails cutting the air like blades.

SOMETIME in the early 1890’s, Jack and several other cowboys journeyed to Virgil for a rodeo, out west of town.

This time, his luck had run out.

Jack Oliver drew the meanest bronc in the lot and was both thrown and stomped.

He told the pick-up man he was alright, that it was nothing, but on the return ride home, he began to grow pale and vomit uncontrollably.

“I can’t breathe,” he said, clutching at his sides, grimacing in pain, so much so that his companions decided to speed him back to Virgil for the doc.

The internal injuries were a death-sentence, and although Jack managed to make it back to the little shack on the pasture whose name I will not write, he died right there, with the night black and the moon bright.

Since Jack’s death over 120 years ago, folks have called that place by a name which combines a racial epithet with a curse that he and others like him should die, even to this day, often uttering the words blithely and without a second thought.

It’s a testament to the way in which racism creeps causally into our lives, digs in and festers, going almost unnoticed even as it shows itself to be an undeniable part of our local language and shared history.

It reveals to us how the mythic figure of someone like Jack Oliver can be all but lost, the grandeur of his deeds almost entirely faded from memory, when what hangs on is a slur, a curse that reduces everything he was to nothing more than a name which I will not write.

Instead, I sing the nightsong of his legend.