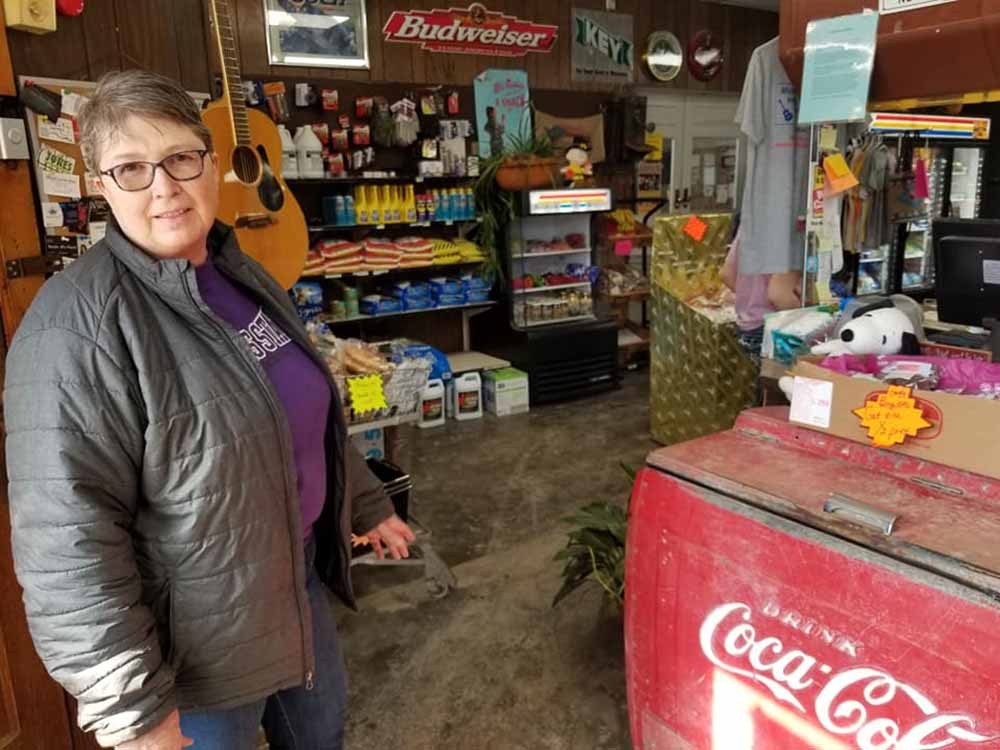 The Mildred Store, formerly Charlie Brown's, and its owners have become caretakers of the town's past. The store dates back to 1915, not long after the founding of the town.

From the moment you cross the threshold in the Mildred Store, you find yourself immersed in the history of rural Kansas.

The first thing people bump into is the antique soda cooler, which despite not being the original, provokes a flood of memories in guests, especially those who recall the ice cold bottles found there when the place was still called Charlie Brown’s.

The Browns owned and operated the store for 99 years — starting in 1915 — before it changed hands to Regena and Loren Lance in the summer of 2014.

Having grown up with the store, Mildred native Regena already had an enduring emotional connection to it, and so when the opportunity arose, she and Loren decided to take the leap and restore the community gathering place.

Today, the Lances not only find themselves making sure folks are well-fed (thanks to their legendary sandwiches), they’ve become caretakers of Mildred’s storied past, sharing the tale of how an unassuming cornfield became a boomtown of 700 people.

The youngest town in Allen County, Mildred got its start in 1907 thanks to the Great Western Cement Company, and was named for the daughter of the company’s president, J.W. Wagner.

Remnants of the plant still lurk north of town behind tall grass and weeds, one of many local vestiges from a time when concrete was king.

The bank was located just west of Charlie Brown’s, and its concrete vault is still standing.

Shuffling through the snow, I peered inside to find, not piles of forgotten cash, but several rusted-out amenities such as an antique refrigerator.

The hotel was located just east of Charlie Brown’s, though beyond photos about the only remaining relic is a beautifully-preserved antique dish.

The most complete sketch I’ve come across of life in early Mildred, or at least the most humorous, comes from a Register article with the subtitle “Correspondant takes a full-length bath. Very interesting story of small town life.”

One of the first lines in the piece is “Anyone who does not like a small town ought to stay away from Mildred,” though the writer goes on to praise the little town as comparable to life in a Kansas City suburb.

He then goes on to list all the amenities one can find in Mildred, from electric lights to the movie theater, but truly seems enthralled by his amazing bathing experience, “one of the finest the writer has ever had.”

He apparently didn’t care for getting sweaty in the summer, and Mildred had just the remedy.

Back inside the Mildred Store, along with a plethora of classic product boxes, signs and posters, resides the city’s post office.

Charlie’s wife, Lucille Brown, was the last postmaster, and also operated the office when it was still across the street.

If you look closely, you can find the window marked “Registry/Money Orders,” through which Lucille often peered, but it’s now almost entirely hidden behind containers of Mildred Store special seasoning.

Noticing one of many antique telephones on the wall nearby, I indeed realized it was no exaggeration when the Lances said “all the antiques are still like they were when Charlie Brown was here.”

And that means finding quite the variety of items as well, since along with the grocery store, the Browns ran several other businesses including a stable, saddle and tack shop, fence-building supply, mechanical repair and more.

“There’s stuff behind the wall we haven’t even touched,” the Lances added.

The middle room of the Mildred Store is practically its own museum, dedicated to both the town and the store itself.

Newspaper clippings there celebrate not only the past, but efforts in the present to keep small towns alive through eliminating food deserts and maintaining grocery stores.

On the south wall is a brightly-painted covered wagon, bedecked with red and green, built by an Iowa company around 1866. It originally belonged to a rancher in Bronson, and was used on cattle drives to transport bedding and supplies.

Some of Charlie Brown’s original signage for the store, along with various pieces of farm equipment, dangle overhead, and not far away, rows of bright orange church pews line the space for Music Night.

There are even a few traces of when the Browns sold Model-T Fords out of the same spot.

Everywhere one looks, there’s something “new” to discover.

Not long ago, Regena Lance was kind enough to take a break from calf-sitting and share with me a map of Mildred drawn from memory by Robert Cunningham, who lived there between 1929-1932.

The sheer number of homes and businesses sketched out in fine graphite lines were jaw-dropping.

Regena pointed out several features, straining to read the tiny print, and laughed when she came to one in particular, “Silk Stocking Lane.”

Though it might sound scandalous, as far as we know the name refers to a type of “Modern Home” as opposed to a house of ill repute.

I asked Regena where on earth all the houses/buildings in Mildred disappeared to, and she said the majority had simply been moved elsewhere.

Along with map-reading, Regena shared some of her memories of Mildred and Charlie Brown’s from when she was young.

“I grew up about four miles east of here,” she said.

“We used the store all the time as kids. Charlie Brown, he had the most unique marketing strategy. … He’d say: ‘Hey Regena, go tell your grandpa I’ve got a whole new shipment of toys in.’”

Needless to say, it worked.

“The toy rack is still back there,” she gestured, pointing.

She further recalled the standing deal Brown had made with her mother, namely, “he gave mom all of the bananas that were going bad with the understanding that a loaf of banana bread came back.”

And Regena fondly remembered Charlie’s better half as well, saying “Lucille, she gave everyone free candy, handsful at a time.”

“People always said Lucille’d give away the store,” Regena said, laughing, “but Charlie’d make it up in the back.”