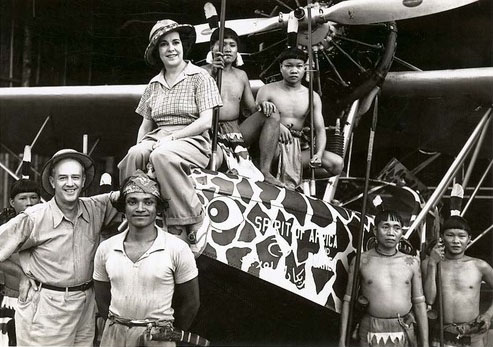 Marrying ourselves to adventure

Osa and Martin Johnson traveled to Africa in the early 1900s to film cannibalistic tribes. They brought the so-called "dark continent" to the light of the public eye.

"America, probably because it is the most civilized place in the world, is the most dangerous.”

Such was the observation by adventurer/film-maker Martin Johnson during his final interview, not long before perishing in a tragic plane crash in 1937.

Perhaps he’d been reminded of something he’d seen more than a decade earlier, on a visit to Chanute with his wife and fellow explorer Osa, namely, a Ku Klux Klan march.

Upwards of 5,000 Klan members had rallied there with white robes and blazing crosses, and as Martin put it, “I did not like the way they looked in my direction as they marched past.”

He also wondered if his efforts at depicting African life and the lives of other people of color across the globe had made him a target for their rage, for not only did most Americans not understand the indigneous people that he and Osa had encountered, many actively despised them for doing so.

The pair were bringing the so-called “dark continent” and elsewhere into the light of the public eye, precisely where many folks believed such “savage” places didn’t belong.

OSA and Martin Johnson’s first shared adventure took them to the South Seas, where Martin was obsessed with capturing cannibalistic mourning rituals on film.

Of note, is that just before departing, Osa had undergone surgery on her reproductive system, which likely rendered her incapable of having children. This haunted her throughout her life, but it also set her free from the obligations of traditional motherhood.

After landing and asking the locals for assistance, the pair headed for Malekula, the largest of the New Hebrides Islands, which was home to the Big Nambas (or “Big Numbers”) group, and whose leader Nagapate, was considered “a holy terror.”

Indeed, the people Osa and Martin encountered had already sent chills of terror through Osa, and apparently reinforced certain problematic attitudes, as she said she found “it hard to believe they were men at all.”

When they finally encountered Chief Nagapate after a 3,000-foot climb to the top of a mountain, his appearance was likewise a shock, but that didn’t stop Martin from casually cranking his camera during their first encounter.

THE INDIGENOUS people were fascinated with Osa, especially Nagapate.

He couldn’t stop himself from touching her skin, puzzled by the color, and marveled at her blondish hair as well.

Nagapate momentarily ordered the Johnsons to be seized, but he was made wary by the presence of a British patrol boat nearby.

Though the Johnsons managed to escape, the footage shot by Martin on Malekula deeply unsettled American audiences, reinforcing their racism.

For as historian Kelly Enright explains, “instead of garnering understanding of indigenous cultures, it testified to the dangers of so-called savages.”

And it certainly didn’t help that racial tensions across the country were already at a boiling point, so much so that, “white-black riots raged throughout American cities.”

NEVERTHELESS, the Johnsons would soon after return to Malekula, after the release of their film “Cannibals of the South Seas.”

This time, Nagapate and his warriors received them warmly, offering gifts and even agreeing to sit down and watch the Johnsons’ film about them.

The indigenous people were especially awe-struck when they viewed footage of a man who’d recently died, as though he’d risen from the dead.

Soon after, Nagapate’s trust in the Johnsons had noticeably grown, which Osa described as “the greatest compliment … that the savage chief could have paid us,” though she had also grown weary from living “among dirt-encrusted man-eating strangers.”

Hence, one can see how, as Enright puts it, “Martin and Osa respected [cultural] differences, even as they found them repulsive.”

OF COURSE, as people belonging to their own historical moment, the respect the Johnsons exhibited toward other cultural practices was limited.

For instance, on another island near Malekula, Martin found the actual cannibals that he’d been looking for, and couldn’t stop himself from capturing their sacred rituals on film.

He photographed a Native man who was smoking human heads for the purpose of curing them, and who explained that only the heads of family members are given such delicate care.

The experience must have whet Martin’s whistle, for after witnessing a similar ritual on the island of Espiritu Santo, he didn’t stop at only taking photos of “a human head in the embers.”

According to Enright, “he wrapped the head in a cloth and took it with him. [For] finally, he had proof … that cannibal rituals still existed in the South Seas.”

Such an example illustrates well how the Johnsons were both simultaneously forward-looking in their views of Native people, and yet thoroughly embedded in the problematic anthropological assumptions and in-sensitivities of the times.

BY CONTRAST, it’s difficult to overstate the impact of Osa’s life in relation to gender, and what she believed (and demonstrated) that a woman is capable of, both prior to and after Martin’s death.

She may have cultivated the image of a glamorous and intriguing celebrity, especially given her entrees into the fashion world, but she was so much more than a pretty face and a media curiosity.

Osa Johnson was integral to the couple’s entire operation, which she revealed time and again through everything from hunting animals for food, to driving now-antique Ford motorcars across forbidding landscapes.

Indeed, even following Martin’s death, she proclaimed, “I was scared when we first started these expeditions. I guess most women would be. But now I love it. I can’t wait to get back in the jungles.”

YET although Osa continued to enjoy many successes after Martin’s passing (despite facing widespread sexism), from publishing children’s books to helping with multiple charities, the hole in her heart could not be filled.

For certainly, in many ways, the story of Martin and Osa Johnson is a love story, even if it contains more “respectful regard” between the pair than passionate romance.

“We are pals and co-workers,” once wrote Martin, “and that is more than a lot of married people can say.”

Is it any wonder, then, why Osa’s drinking and depression began to consume her later in life, and why she found herself in unfortunate and exploitative relationships?

“I don’t quite know what has happened to me,” she once wrote, as though presaging the future, “but I feel so new and different, as if nothing mattered now, and as if my soul was as blank as the Sahara desert.”

Loneliness had already begun to hollow out her world, yet even through the pain, the anxious allure of the “wild” would continue, inexhaustible in its demands.

“The sun is shining so beautifully, and these great waves of deep blue water seem to be so restless and discontented with themselves,” Osa continued. “They seem to be always seeking some new kind of adventure.”

… And it is a call that, given ample courage, we too can answer.