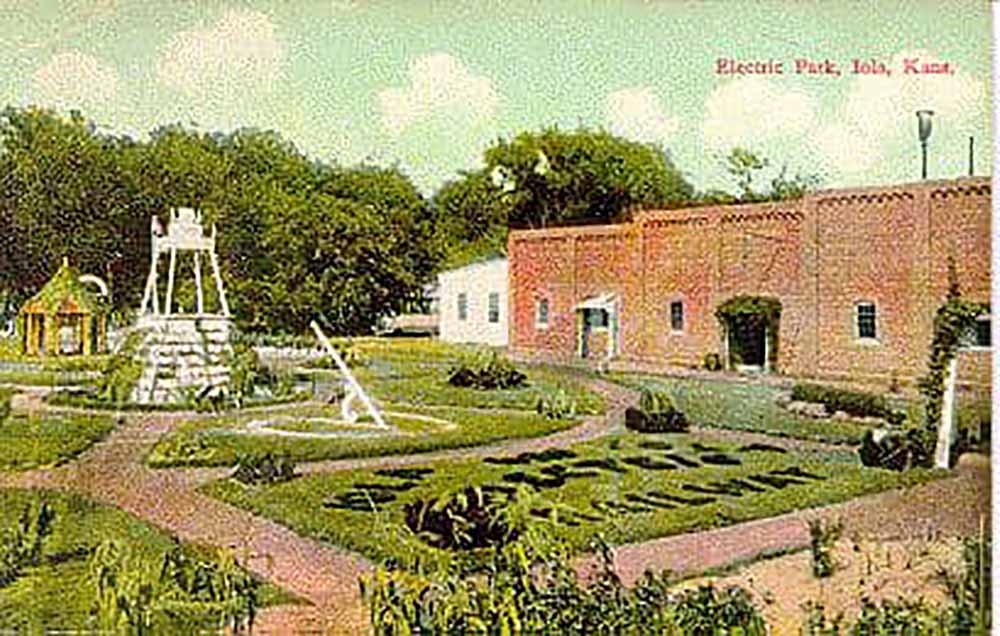 Lighting rainbows in the darkness

Electric Park lit up the nights and the spirits in the early 1900s. A Labor Day celebration reportedly brought a crowd of 50,000.

Last time I was there, on the shores of Rock Creek where it’s crossed by highway 54, I stood in awe of the lights and music.

You could feel joy radiating from the park entrance, blending with the heat of summer, as thousands of voices became one in an ebullient din.

Time to escape the oppressive smell of the factories and live it up, 1907-style.

What should we do first?

Just inside the gate with its elaborately landscaped gardens, I found myself distracted by the hot air balloon that was giving rides and almost bumped into some smelter workers with their lady-friends in tow.

I had seen them on the trolley, getting wild on the ride in, and one of the gents was already so tipsy that he could barely stand.

Factory life must have been getting to him.

When I saw his compatriots pulling him toward the figure-eight roller coaster, I knew he was in deep trouble.

Time to get some distance.

The midway, however, was completely jammed with people, and many were lining up to play games like bowling and Japanese Roller Ball.

Some had been there throughout the evening, having first gone swimming or held a picnic on the huge grounds that doubled as a public park.

Sidling up to the mirrors at the laughing gallery, I watched my shape warp as two young girls squealed with laughter at their own distortions.

They still wore their roller skates, and were practically having to hold one another up while trying not to drop their bright pink cotton candy.

Breathless with giggling, one then turned to her mother and asked if they could please, PLEASE ride the water toboggans.

It was then I noticed A.E. Robinson and Lee Massengale, the park managers, who waved me over, likely wanting to get in a good word with the Register.

Massengale had believed in the park from the beginning, though he really hadn’t been able to get things started until 1906; he was therefore fortunate to have Robinson’s experience, having run electric parks from Minnesota to Texas.

They both immediately began spouting park numbers at me, such as how many hundreds of thousands were slated to visit this season, or how much money they were making for the gas-field cities of LaHarpe, Gas and Iola.

I simply nodded to enthusiastic ghosts in agreement.

Having quickly been exhausted by the company, I decided to escape the throng by sneaking over to the creek.

A few teenagers were gathered around a swing by the bank, heckling those who were savvy enough to have brought dates.

The couples wanted to take boat rides down Rock Creek, presumably to smooch in the fading evening light, while the remainder wanted their fortunes read, or to be dazzled by Professor Garnett, the hypnotist.

They compromised, it seemed, by deciding to watch whatever “moving picture” was playing, such as “When Women Sin,” for example, though with the couples grumbling that the setting wasn’t terribly private.

Taking in a show did seem like a good idea, so I headed over to the outdoor amphitheater to see what the company troupe was performing.

People had complained about the vaudeville acts they’d put on last season, so they were trying their hand at the romantic drama, “Zaza.”

It was entertaining for a bit, but the crowds were so loud that it was difficult to hear, and one anxious actress kept forgetting her lines.

Frustrated, I left to grab a homebrewed Iola Coca-Cola, and although it tasted weird, it put me in a better mood along with watching folks embarrass themselves on the dance floor.

They busted out all the latest styles: the Grizzly Bear, Foxtrot, Duck Waddle, Bunny Hug.

My sides hurt from laughing at the creaturely imitations.

As it was Labor Day weekend, an enormous fireworks display was planned, with the smelter men chipping in around $3,000 for the show.

Supposedly, almost 50,000 people were in attendance, sprawling and crawling like ants.

Everyone was waiting with baited breath for the colorful explosions to begin, when suddenly someone “accidently” lit an entire box aflame.

Folks dived behind everything from benches to brothers-in-arms as pinwheels and rockets went flying in every direction.

Others went straight for the creek, and I followed, splashing through the muddy water until reaching the other side.

Collapsing on the opposite bank, I turned my eyes to the infinite darkness overhead and watched as the night sky was painted with a million blinding rainbows.

Coda: Like the trolley car, Electric Park met its end as gas reserves were depleted across the county, thanks to unwittingly wasteful collection methods.

The first smelter closed in 1909, and stunned residents learned of the trolley’s last run on March 21, 1919.