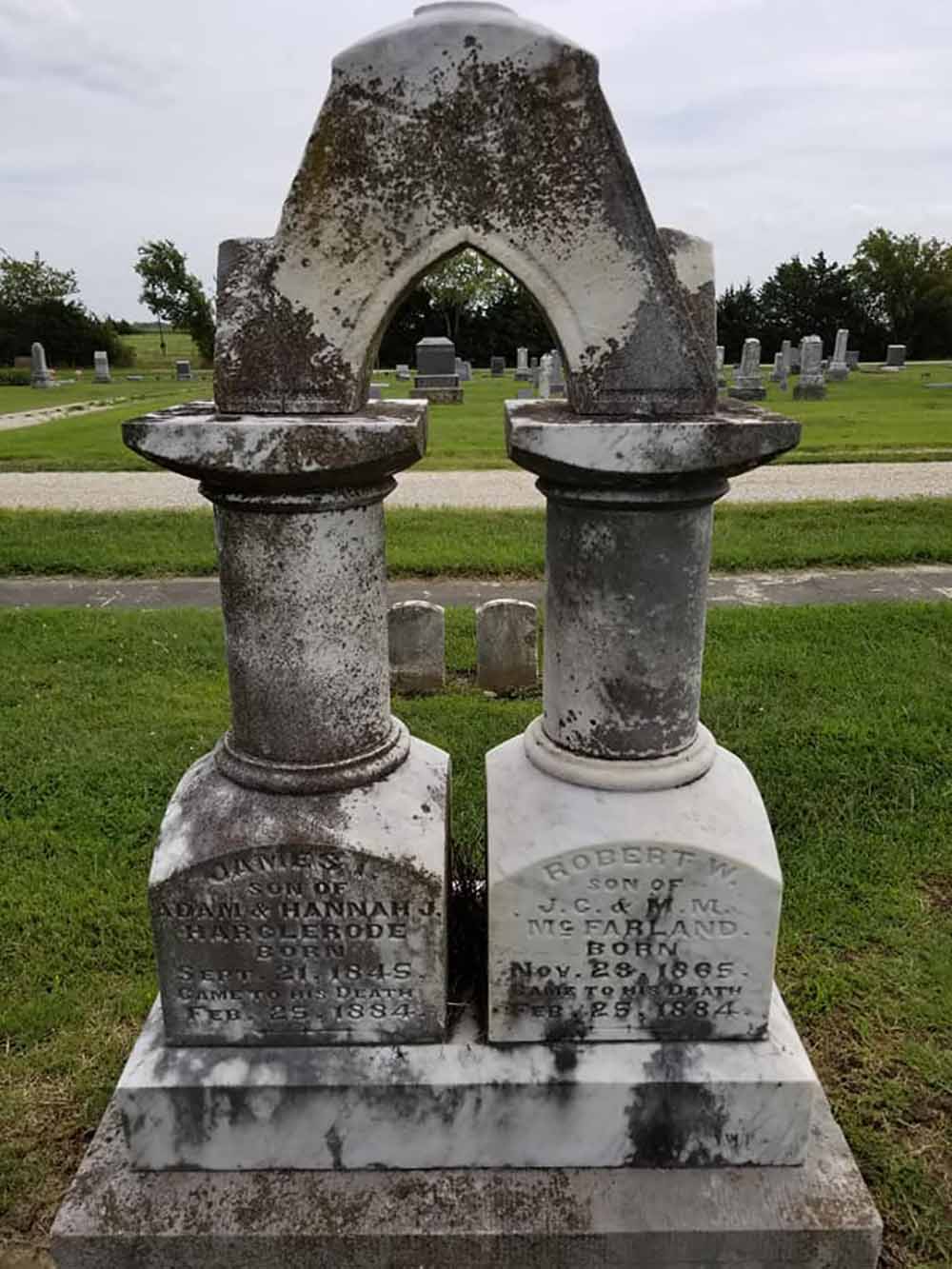 The sky between Moran and Elsmore is open and dreamily quiet. There, late summer corn sways subtly upon warm wind and you can sense your heartbeat slowing to match its rhythm.

But in the 1870s and ’80s, this place was anything but tranquil, and more than once the blood of Allen countians nourished the earth.

There’s evidence of discord as early as 1873, when some 30 or 40 farmers assembled at the courthouse to protest the claim that the L.L.&G. Railroad had on their land.

Early settlers in the area who’d been squatting on and farming the land thought this made them de facto owners. But it was the railroads who’d actually purchased the acres there by the thousands.

“Land Leagues” were soon to form in order that squatters might defend their claims, by deadly force if necessary.

In 1877, they met at the Nilwood schoolhouse “for the purpose of organizing for their own protection in case said lands are restored to entry with no stipulation favoring present occupants.”

As I nervously peered through the doorway of another nearby schoolhouse that’s still standing, Prairie Rose, I dreamed them there, red-faced and bombastically shouting in the dusty little room, ironically incensed that lands which had been effectively stolen from native people had now been taken from them as well.

Four white barn owls gazed at me from the little building’s rafters and startled as I dared to get a closer look, their own silence suddenly turning as frantic as the livid farmers who’d once demanded the rights to their acreage.

It wasn’t a small group of those concerned, either, for a meeting in Ard’s Grove in Elsmore Township reportedly drew 800 wagons and 2,500 people who were living on railroad lands.

Demonstrations and protests were soon to follow, and on April 6, 1878, a makeshift parade of about 40 men passed through Iola with banners, including the demand that the Bowluses not sell any more “indemnity land” to the railroads.

When I last walked along the Iola square, I dreamed them there, slowly processioning, with long white sheets drawn between horses, streaked menacingly with paint and making not-so-veiled threats on George Bowlus’ person.

On the other hand were those who either recognized the railroads’ claims or didn’t want to see the situation come to blows, such as the Taxpayers Union in Moran who called the Land League’s actions “unwarranted and unlawful.”

They even went so far as to call the Leaguers “terrorists,” and 82 local men signed a document opposing their activities.

Given the contrast, it isn’t hard to see how the situation was ready to explode.

IN Moran cemetery, there’s a rare arched stone carved from what appears to be white granite. It’s doubly unique in that the two bodies buried side by side beneath it are both men, and appear to be unrelated by any obvious family tie.

What binds them together instead is having met their untimely ends due to the war over land not far to the southeast of the cemetery, near the little village once called “Elsinore.”

Surrounded by the ghosts of mourners in black, I recalled the story.

In February 1884, “Widow” Hawes had recruited her brothers James and John Herklerode, along with a young Robert McFarland, to come out to her land to start building a house.

However, the land on which this house was to be built was also claimed by another Leaguer, Hugh Guilland, who was rumored to be a pretty rough character.

As the builders were on their way to the proposed site of Hawes’ house, they were stopped by Guilland and his three sons who ordered them to leave, though eventually claimed they were content with letting the Land League determine who ultimately had the best claim.

Either they’d changed their minds or it was merely a ruse, for shortly after the Guilland’s came charging back fully armed and opening fire on the Herklerodes.

James was shot repeatedly by Hugh Guilland, including a bullet that passed through his heart, leaving him dead in the dirt.

Not to be outdone, Guilland’s sons (Ike, Joe and Andy) shot Robert McFarland repeatedly and, according to the Iola Register, “then finished with a 2×4 scantling, literally beating his brains out.”

Guilland and his sons narrowly escaped a local lynch-mob by fleeing to Humboldt to surrender, and though they were convicted would only serve short sentences before being pardoned.

It’s little wonder that while standing in the Moran cemetery, one can still sense feelings of rage and grief radiating from around the two young men’s pearlescent monument.

DESPITE the U.S. Supreme Court upholding the railroads’ various land titles, along with the protestations of residents (and livid newspaper editors), the conflict was far from over.

Houses were set ablaze. Former squatters rode up and shot at new land residents in broad daylight. The courts were in upheaval. Elections hinged upon whether or not one was “for the League.”

Perhaps the most incredible incident, however, happened in August 1888, in an altercation between Leaguer J.W. Crisler and Columbus Carter.

Crisler was a tenant on a farm where another Leaguer named Smith had been evicted, and Crisler and others therefore despised Carter merely for taking over the claim.

At one point, they crossed paths near Crisler’s house whereupon Carter drew a revolver on him and reportedly said “I might as well give you one right now.”

In response Crisler wickedly swung his pitchfork at Carter, disarming him, and the two gladiators then scabbled in an all-out brawl.

According to the Register, “the two men grappled and fought until one of Crisler’s ears and a part of his nose was bitten off and one of his eyes was gouged out.”

Columbus Carter was arrested shortly after, held in Iola and then brought to trial in the Mattox country school house.

During the proceedings, tensions were so heightened that “Carter’s attorney became convinced that preparations were being made to lynch his client,” which might have had something to do with the effigy that had been hung up by the mob.

Carter was therefore to be transferred from Iola to Moran, but along the way the wagons were overtaken by 15 masked horsemen who started firing and demanded he be handed over.

Supposedly, with a grim expression Carter said: “For God’s sake, boys, if you’re not going to shoot, give me the gun.”

So they did … though Carter only got off a shot or two before being commanded to stop.

Although the group somehow miraculously escaped, Carter was later killed on August 22, 1888, ambushed on his way home to Iola.

The Leaguers had hidden out behind a hedge fence, though some reports say in a corn field, and waited for Carter to pass.

In the Bronson cemetery, I stood over the grave of Columbus Carter, thinking about how he’d bitten off J.W. Cristler’s ear, then evaded a posse only to be executed at the crossroads.

Patting the stone as a thunderstorm welled up and turned the sky blue-black, I couldn’t help but sense that, in response, oddly enough, Carter’s ghost wore a peculiar and undefinable grin at what he’d managed to accomplish.