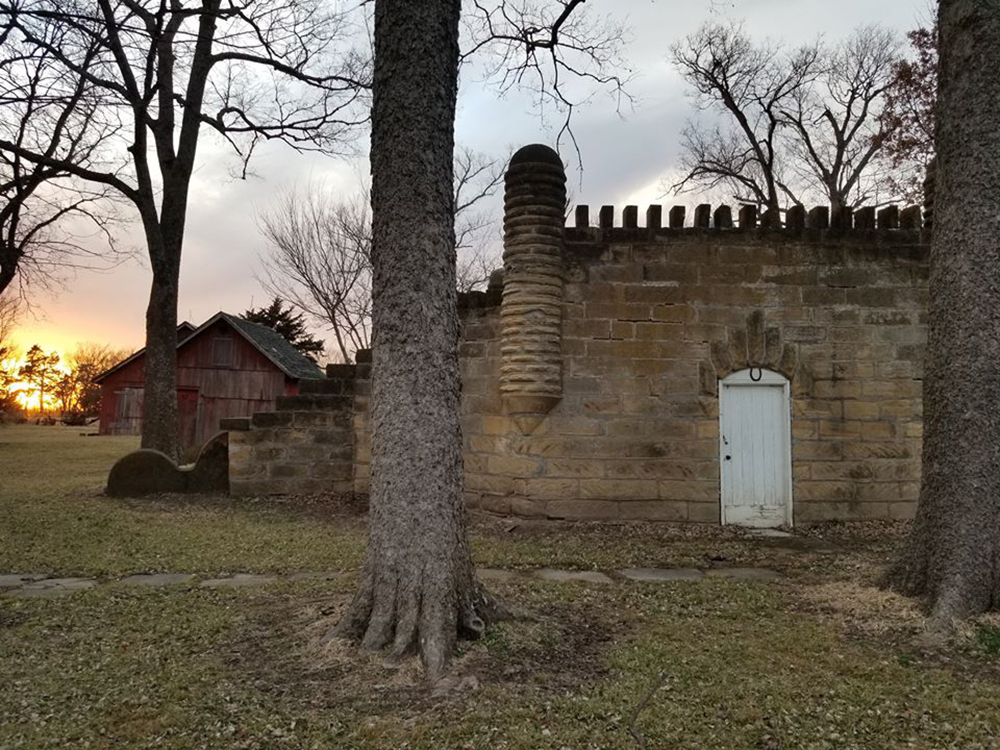 Perhaps the most unique historical feature in all Woodson County, Kalida Castle marks the spot of the county's long-deserted second county seat.

After months of waiting to gain access to the sandstone castle cave at the old townsite of Kalida, southeast of Yates Center on Osage Road, I sat beneath one of its multi-ringed towers, reveling in the bursts of cool air that dipped and swooped in front of the structure.

All of that waiting, anticipation and curiosity, and yet I only felt longing, bearing the burden of someone’s absence.

The architectural marvel, inspired by the Chicago World’s Fair and constructed on the Davidson Farm in 1893, loomed above me, its wide base stretching more than one hundred feet, yet it was my new love’s slender frame that singularly occupied my thoughts.

DAYS PREVIOUS, Vickie Pickering, who today owns Kalida Castle with her husband Roy, walked with me through the nearby dilapidated farmhouse that she grew up in as a child.

“I really don’t mind people comin’ out and lookin’ at it,” she said. “My folks loved it.”

Doves called in the heavy evening — be-uu, be-uu — as we entered the house. Vickie lamented that “when [her] folks passed away, people started coming out here and vandalizing stuff.”

We had to watch our step to not lose footing and fall through the brittle wood floor. Vickie said the house didn’t have electricity when she was growing up, and that they “lived in the middle room” near the crumbling antique piano.

I WAS JUST NORTH of the house when I began to write — back on solid ground — and yet my feet still felt unstable, knees wobbly, as I reflected upon the excursion. I feared my chest might collapse like the old red barn behind the castle.

Large elm trees stand guard over the cave’s front entrance, though I could see around the corner to where its white wood door was cracked open beneath an ornate carving in the facade.

In keeping with its original function as a cellar, Roy Pickering had placed boxes of sour green apples just inside the threshold. Whether the cave can shelter one from romantic confusions, I have yet to find out.

Behind me, the cave-structure sloped down into the earth, allowing one to stumble up the rugged hill from either side and stand on top.

Large sandstone blocks flank the ascent, and at the bottom are curved ornamental decorations of immense weight.

I had wanted, like a knight-crusader from some Medieval legend, to scale the walls to find my princess, rescue her from her proverbial dragon, and bring her home.

THOUGH ONLY 4 o’clock in the afternoon, the crickets were chirping nearby, their hymn a fitting reminder of my own drowsiness.

Had I dozed off I would have dreamt of her: the color of her hair, her tiny wrists, the way she laughs with her whole body, eyes closing with the effort.

A single black cricket leapt from the grass and began to scale the castle wall, climbing straight up, then stopping. Suddenly, the ebony insect changed paths and in doing so increased the struggle destined in its ascent.

Perhaps it was searching for its mate as well.

IMPATIENT, I moved inside the cave itself and sat beside the boxes of apples, recalling how Vickie said her parents used to grow strawberries nearby.

Three vents are cut in the cave roof, and the original stone floor remains intact.

There’s a rusting toolbox nearby and several antique bottles for prescription medicines. A cure for whatever ails you.

A short-handled broom stood against the newly resurfaced wall, and through the rear entrance of the cave I watched the cattail stalks swaying lazily in the breeze.

Their drunken movement gave the scene a sense of activity, and for a moment I could almost imagine the several hundred people who once lived here, frequenting their businesses, hotels, churches and leisure-spots like the pool hall and tavern.

Not long ago, Kalida Castle was also a favorite party-spot for young people. But after such shenanigans, Roy said, “that’s when we shut it down, put signs up, started locking it up.”

“[People] got no respect for nothin’,” he’d angrily shot, looking up toward the sandstone gates plastered with countless scene-marring “No Trespassing” and “Smile, You’re On Camera” signs.

THE TRAIN began distorting the air as its weight thundered past to the east, and I wondered if the sound was reminiscent of when the first frame buildings here were loaded onto enormous ox-carts and wheeled into nearby Yates Center.

You can still find the drag-marks clawed in a nearby field.

Kalida is the place where Yates Center was born, and although the castle was constructed 20 years after the town moved, inside the cave you almost get the sense that you’re sitting inside a womb.

Like a smooth belly one stretches out one’s hands across, reaching around from behind.

When you stand in the kitchen rocking back and forth, a chin on a shoulder, dancing to a melody only the two of you can hear.

It was then I noticed there were several apples in the cave so ripe they’re starting to rot.

Withered and brown, I wondered if their seeds would ever fertilize the earth.

IN ANCIENT Greek, the word “kahlos” roughly means “beautiful,” and indeed it is, this uncanny architectural marvel. Yet the beauty I sensed there was a ghost’s.

I remember her standing in the cave with me, surveying the parapet, ramparts and square-cut blocks limning the castle’s upper walk.

I remember the delicate rasp in her voice as she whispered, “let’s get out of here and away from all these people.”

My reminiscing abruptly ended, though, as Roy fired up the lawnmower and began circling another part of the property, retracing the rows of once-cut grass.

He’s far enough in the distance that only the grinding echo of the machine is audible, much like the distant train.

And so my thoughts returned to her.

When I came to the castle, I knew the place would bare her haunting imprint, and that with indescribable melancholy I would write her form in words across the sandstone walls, the cellar cave and surrounding farm.

Like this place touches all who visit it, I knew I would be moved by the spirit of something at once both present and absent.