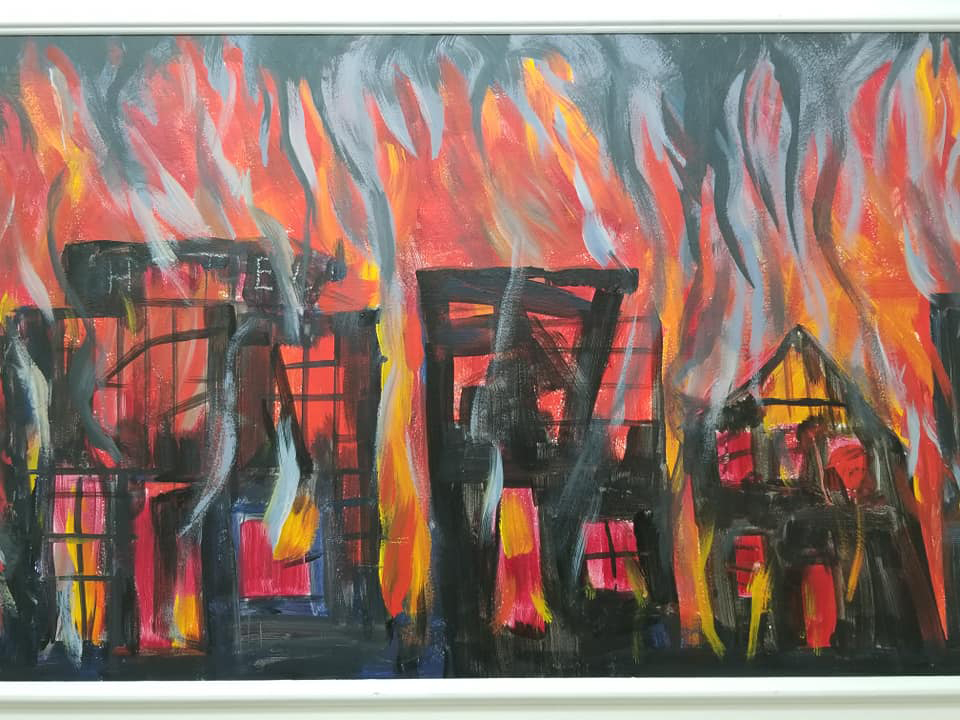 Confederate supporters took revenge on Humboldt homes and businesses in response for the burning of Osceola, Missouri, during the Civil War.

Humboldt was on fire.

Red and pink light spilled across the town square, mixing with the orange and black blaze, yet I couldn’t pull my eyes off the northeastern corner where I’d seen the rebel militiaman take a bullet from somewhere hidden in the distance.

One moment the axe was in his hand, hacking away at the flagpole. The next, he was lifeless and dead.

The smell of ashes thickly swirled about the air, and the shouting had yet to cease along with the anxious cries of horses.

Heat from the inferno combined with that of the warm fall evening, and one would have been justified in believing that Hell itself had opened its doors and come spilling forth onto the prairie.

Through the destruction of more than 50 homes and businesses, Confederate supporters had taken their revenge for the burning of Osceola, Missouri, and the killing of Captain Matthews.

Camp Hunter would later be established near the river, outfitted with Union troops from the 9th and 11th Kansas regiment, but this evening there were few who might hold back the burning tide.

What few men remained who might lead a resistance were soon forced out of town at gunpoint, to what most feared was an execution.

Astonishingly, none of the home guard were harmed, but others were not so fortunate.

Soon to be joining the flag-chasing militiaman on his journey to the underworld was a farmer by the name of Seachrist, who’d refused an order to halt and took a ball in the shoulder.

Trying to save his rambunctious mules would cost him a nasty infection and a slow demise.

Other residents exhibited a canniness and subtlety that was rewarded not only with survival, but homes untouched by the torch.

Dr. Wakefield, a local physician (and secretly a Union officer), had his horses and medical lancets taken by guerrillas, but somehow managed to charm an opposing officer into joining him for dinner at his home.

Years later his daughter Elizabeth would write, “There was confusion as the house had been searched and some valuables taken but it was not on fire although the barn was burning.”

“A torch had been thrown into the front room but failed to ignite. The captain was soon having a good supper and put a guard around the house.”

“This was the night I carried our silver spoons under my shawl.”

Blocks south of the Humboldt square I dreamed of the Wakefields at their home, which is now nothing more than an empty lot with rough patches of grass.

Behind me, remarkably, militiamen were barking instructions as they helped carry housewares outdoors so as to spare their occupants the destruction of property.

With eyes closed, I saw Dr. Wakefield chatting and laughing with militiamen about “the good ‘ol days in Kentucky,” while Mrs. Wakefield was searching for something with which to poison the unsuspecting intruders.

Fortunately for her rough guests, she was unsuccessful.

OTHERS in town were also saving what they could by whatever means necessary.

Catching sight of the rebels from her house on Bridge Street, general store proprietor Sophia Fussman dragged a feather bed out back to her well so as to fashion a makeshift vault.

After tossing the mattress down the dark pit, she snatched up every valuable item she could carry and dropped them below onto the plush cushion.

Dreaming her releasing the books one by one, I wondered at their titles, as I watched silently from across the street as the sound of 300-plus guerrillas and horses drew ominously closer.

Along with their Confederate-loyal Native compatriots, they’d soon begun to touch bright torches to soft surfaces and tongues of fierce color rippled through the early evening.

One house kissed by fire was the Coffey’s, at the Corner of 8th and Bridge, where the militiamen had overturned what they’d believed to be a barrel of tar so as to hasten the blaze.

What they failed to realize, however, was that Coffey’s was also a grocery store, and what they’d spilled was actually molasses.

Thanks to the sticky-sweet retardant, along with an enormous pile of wet laundry, Mrs. Coffey was able to staunch the flames.

Another heroine was Kate Burnett, whose brother, J.C., was the register of the newly opened land office.

Legend has it that she gained permission to go into the building by, oddly enough, asking to obtain a candle, and while inside the office launched $25,000 in land warrants out the window into the tall grass below.

I dreamed her there, spellbound, as I watched from across the square while papers more valuable than currency drifted through the air like leaves, some of the edges singeing and turning black as they fell.

They danced and turned as did the wily women of Humboldt in outsmarting their determined arsonists.

THE AFTERMATH was a horror to behold.

The Rev. Berner, a minister serving the Owl Creek area in Woodson County, wrote in a letter that while visiting families near Humboldt he initially saw the devastation at the distance, then firsthand.

Narrowly missing an encounter with the rebels by hiding out in a cornfield, he said it was possible to “hear the roaring of the fire and the crashing of the buildings as they succumbed to the raging elements.”

“At 10:30 p.m. the miscreants left the town, after they had gratified their destructive lust and had pillaged all they could.”

The following morning, “nearly the whole town lay in ashes and ruin, [with] parents and children left homeless.”

“One mother was carrying her little child in its arms with absolutely no clothing on its body. Everything was plundered or burned.”

All worldly goods that Berner had left in town were gone as well: buggy, harness, saddle, money.

His church was one of the few buildings spared, however, unlike O’Brian’s Mill and so many others.

One dreams him there, that morning, October 15, 1861, as a blessed rain began to fall, extinguishing what fires remained.

One dreams him outside the church doors gasping, sobbing, thankful for his and others’ lives whilst surrounded by abject destruction.

One dreams him asking the only question that likely seemed to matter: Why?