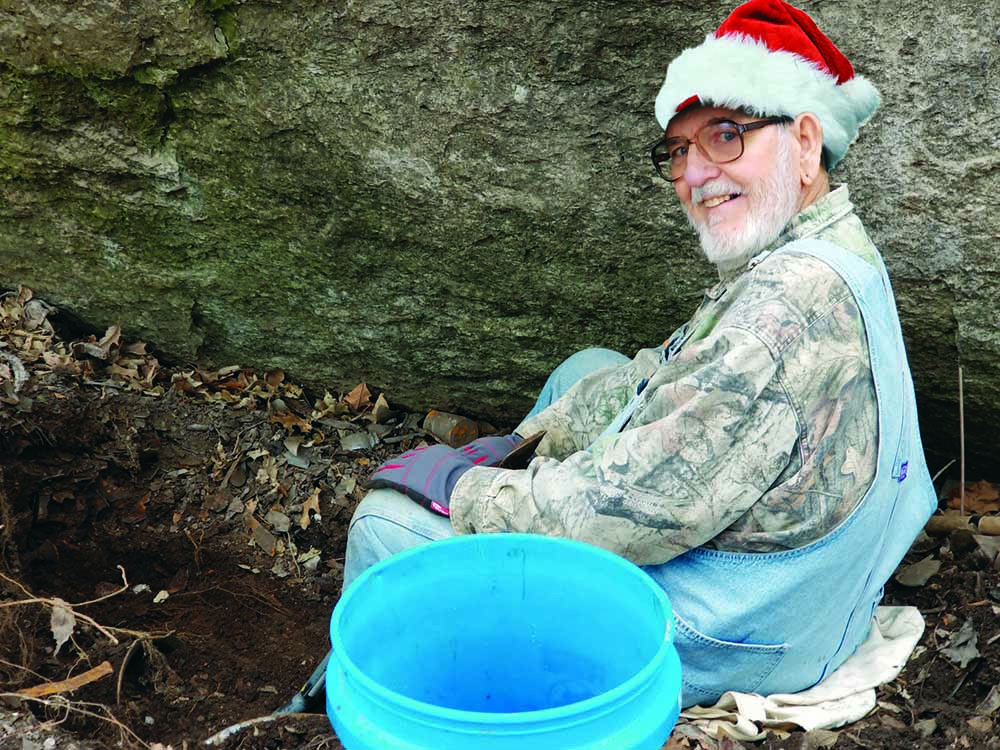 Humboldt caves: Many roads to freedom

The banks of the Neosho River hide a series of solutions caves where water patiently drilled through rock over millennia. They are also believed to be a stop along the Underground Railroad, where slaves hid prior to the Civil War.

Along the banks of the Neosho River west of Humboldt hides a breathtaking surprise, and an even more exhilarating story.

Lining the bluffs not far from the “Camp Hunter” park, a series of solutional caves reveals both places where water has patiently drilled through rock over millennia as well as where escaped slaves once hid themselves prior to the Civil War.

The caves were reportedly part of the Underground Railroad, a network of secret routes and safe houses established to help Blacks escape into “northern” free states, Canada and other places where slavery had been abolished (like Mexico).

According to John Rankin, “it was called [a railroad] because they who took passage on it disappeared from public view as really as if they had gone into the ground. After the fugitive slaves entered a depot on that road no trace of them could be found.”

Though it wasn’t a literal railroad, by 1850 the system of hiding places and travel routes had ferried around 100,000 people to freedom.

Near the site of Humboldt’s river bridge even, Col. Orlin Thurston and his friend/physician Capt. George Miller aided escaped slaves with the help of tunnels, caves and a couple unassuming sandstone buildings.

So not only are they an extraordinary natural feature, the Humboldt river caves are part of our country’s ongoing struggle to deliver on the promise of “liberty and justice for all.”

According to area papers dating back to 1861, during the first raid on Humboldt, as many as a dozen fugitive slaves were captured and returned to Missouri.

Standing between the river and the sequence of cave faces, one is quickly launched back in time to when water and landmarks set the rhythm and geographic tone of our days.

Only those things as solid as a limestone cliff, or as pliable as black-brown waves will survive.

The winter air was cold and unbending when last I was there, and I found myself watching the crows who’d come to peck about and explore the earth below them.

Their calls were soft and crooning, as though they were trying to comfort the dead child whose gravestone someone had thrown from the bluff into the “dump” below.

An almost identical stone for the same person resides in Mount Hope Cemetery.

Surveying the stone at length, I stood there wondering what meaning echoes forth from a life that lasts only days, weeks, a single day.

Long smooth icicles dripped quietly in the strange slow light, and once again it seemed as though time had begun to distort and inflect upon itself.

What more might it be possible for us to dream, then, about an escaped person who’d managed to hide themselves within one of the caves on their harrowing quest for freedom?

They would have been one of many making the flight “north,” though likely traveling in a smaller group to maintain anonymity.

Children were hard to keep quiet and therefore a risk, but it’s one some were willing to take. Given their social roles, though, it was harder for women to break away from plantations and other settings without being noticed.

Once underway, traveling on foot was likely the way of things, and along routes that were purposefully confusing and meandering.

The escapees would have been aided by a “conductor,” like the inestimable Harriet Tubman, someone with abolitionist sympathies and often part of a religious organization.

Using codes and cyphers to communicate, they would often travel at night to avoid interactions and encounters. And along with the caves, they’d seek shelter in barns, under church floors, and other ingenious hiding places.

Legends have circulated over the years that escapees and conductors would use quilts marked with different patterns to indicate instructions, though this has not been definitely proven.

By contrast, there’s no need to prove the incredible courage and daring demonstrated by those who risked everything to find a new life; one that might have still been fraught with discrimination and struggle, but at least contained an elevated sense of dignity and possibility.

Given the location of the Underground Railroad caves’ proximity to Riverside Park, one would be remiss not to discuss the park’s historical significance as such.

Still known by many today as Camp Hunter (aka Log Town), in the years following peak “railroad” traffic, the site became a hive of Civil War-era military activity.

In spring 1862, for example, the notorious Kansas 7th was stationed there, and these Jayhawkers or Red Legs murdered, pillaged and burned Missouri towns much like the Missourians burned Humboldt.

Col. Jennison, who flouted traditional military law, and others would thereby keep in motion a cycle of violence that would claim thousands of lives.

…including that of one Private Driscoll.

Driscoll was being held on desertion charges at the Camp Hunter jail, when he decided to steal a horse and flee, following encouragement from Jennison.

Driscoll would end up shot to death by a firing squad on March 15, 1862, beneath the soft elms of what would later become the park.

Artifacts from this time continue to be found around the park as well, such as bullets, and the exceptional war diary of quartermaster sergeant Fletcher Pomeroy provides one an almost blindly bright window into this world.

In February 1862, Pomeroy mentions journeying from Garnett to the “small fort” in Iola, then onward to Humboldt, which he describes as being “about 100 population.”

He first points out how “our camp is between the river and the town,” then goes on to describe the bluff containing the caves as being about “twenty-five feet high, of perpendicular rocks … and about 100 feet the foot of the rocks to the water.”

Pomeroy recalls using a ladder to collect water from the Neosho, and mentioned how “a road [was] cut down leading to the ford opposite the camp.”

Pomeroy added that while staying at Camp Hunter, five men deserted the company so others were sent to retrieve them.

One dreams the search party departing west in darkness across the prairie until reaching Fort Belmont in Woodson County and Fort Rowe in Wilson County, while there encountering Chief Opothleyahola’s group of 6,000 Creek/Muskogee people who’d fled from Confederates in Oklahoma (and been left with nothing).

Around 1,000 of those in Opothleyahola’s band, which included Blacks as well as Muskogee, would later march south to Humboldt from Le Roy, thereby forming the First Indian Home Guard regiment.

After returning to Camp Hunter himself, Pomeroy described the indigenous group he’d met at the fort as “very destitute of clothing and food, [where] many of their ponies were dying of starvation.”

In fact, it was hell on earth.

But as for the deserters, “we heard nothing.”