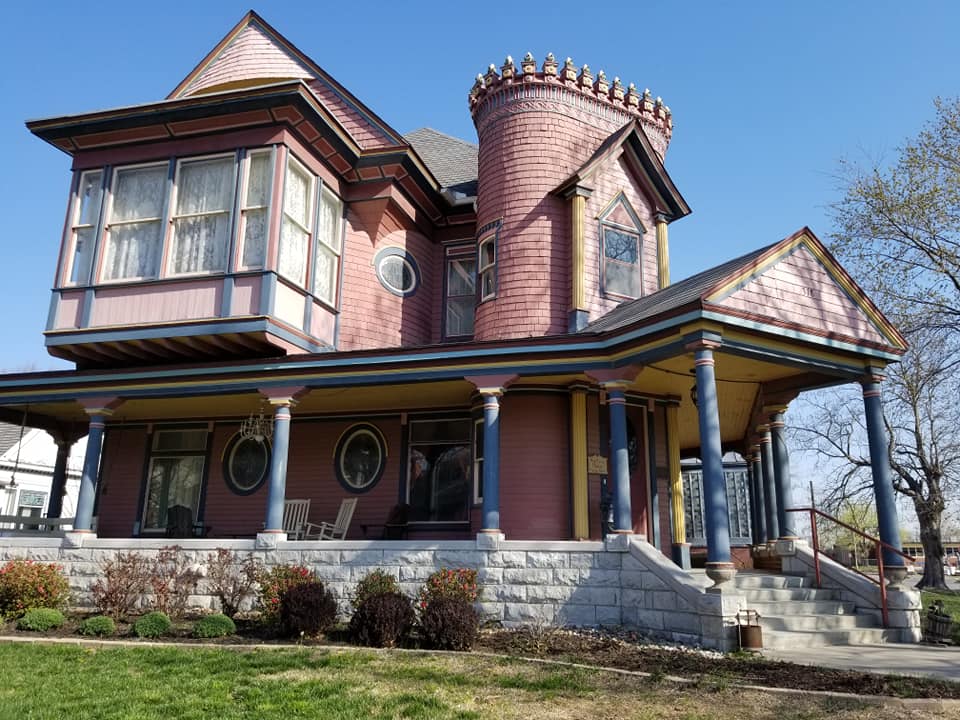 Levi Lee Northrup and his sons constructed beautiful homes and founded countless projects in the community. Many of the homes remain, including one on the National Register of Historic Places

What makes a house a home is memory.

Whether log cabin, wood frame, brick or native stone, such materials activate and retain an imprint of those who dwell within them.

Those memories may again be called forth, urged from the surrounds, so that the story of a life might manifest in all its glory.

For instance, when Levi Lee Northrup came to Allen County in 1858, perhaps he never would have imagined the mark he’d one day leave behind.

However, between the breathtakingly beautiful homes constructed by Northrup and his sons, and the countless other projects funded by his bank (such as the MoPac line, natural gas fields and Presbyterian Church), it’s not an exaggeration to say that the Northrups built Iola.

They therefore provided myriad spaces for its memory to be housed and grow.

Levi Lee Northup’s rise, however, was an unlikely one.

Born in New York in 1818, his mother died when he was only two years old. His father also wasn’t in the picture, so he was raised to adulthood by his uncle.

Despite having little money or education, Northrup eventually came into his own, and started wool manufacturing businesses in both New York and Indiana, but in an incredible run of bad luck, both his factories burned down.

Looking to start again, he relocated to Geneva, Allen County, in 1858, bringing with him general store goods and the materials for a saw mill.

According to the Register’s archives, “the mill was brought in according to contract and set upon the banks of Indian Creek. Northrup also started a store in the village.”

However, after it was apparent that Iola rather than Geneva would become a city, Northrup moved south, and at the time when the Civil War had begun ramping up, set up the city’s first bank on the west side of the square (where the Masonic Temple building sits).

The original safe weighed over 6,000 pounds, and had a time lock feature similar to the one that foiled the Dalton Gang when they attempted to simultaneously rob two banks in Coffeyville.

Against all odds, Northrup’s bank was one of the few to survive the financial calamity of 1873, and continued growing until, by 1900, it became a national bank that served all of southeast Kansas.

When in 1896, L.L. eventually died from a nasty flu-like illness, all of Iola suspended business in mourning.

Although Levi Lee Northup has been gone for 125 years, one of the most incredible items he left behind is his three-story home at the end of South Cottonwood Street.

However, Northrup’s three homes on East Street typically draw the most attention. These were built by L.L. Northrup’s sons, Lewis and Frank, who also had a home built between them for their mother, Mary.

Local attorney and historian Clyde Toland informed the Register that the Northrup family members built and lived in two houses behind the three Northrup Houses in the 300 block of East Street. Thus, the entire block was Northrup houses and had the only paved alley in town. Toland also noted that the Delmer Northrup house at 502 East St. was torn down in the 1930’s to build the tennis courts, not the high school, as the Register originally reported.

Another structure worth mentioning is the Northrup Bank building that once sat on the northwest corner of the Iola square.

Around the same time as the family’s lumber business was really taking off, the moulded brick structure came into existence, and for a time housed the Elks Lodge, Iola Library and Ramsay Bros Dry Goods along with the bank.

It was destroyed by fire in the frigid January of 1949.

As it is one Allen County’s few structures to grace the National Register of Historic Places, some special attention is warranted for “The Northrup House” built by Lewis Northrup in 1895, just before his father passed away.

Thanks to research conducted by Register reporter Vickie Moss, we know that the house began as a Queen Anne style cottage, and that additions made in 1912 reveal how the home signals a transition from an asymmetrical style to a more “disciplined” Colonial Revival one.

“The Northrup House” remained in the family until 1927, four years after Lewis died.

Since then, it’s served as a bed and breakfast and private residence.

According to present owner, pharmacist Nich Lohman, there are pros and cons to owning a home on the National Register.

The good part is increased property values, along with access to grants and tax write-offs. This is critical when repairs are almost always more than a traditional property.

The bad part is exorbitant insurance costs, and companies unwilling to incur the risk of covering an 125-year-old structure.

“You really have to be committed to preserving it,” Lohman said. “You can’t modernize things and that really limits what you can do.”

This is because, in order to remain on the National Register, no contemporary restoration methods can be employed.

That doesn’t deter Lohman, however, and he affirms his role as the historical home’s steward.

“I don’t necessarily ‘own’ it,” he said. “I’m just caretaking it and eventually we’ll pass it to someone else who will care for it.”

“Hopefully, it will continue to be unique, and a source of interest for the community for years to come.”

Such interest, it would seem, is bound to a longing for memory, for keeping the memory of the community itself, and not just one family’s legacy, alive.

Indeed, whenever I visit the Northrup homes, I’m transported back in time as though the East Street block is some sort of singularity with the potential to warp space-time.

When last I was there, for instance, I ran into the ghost of Roy Sleeper.

In 1897, just after the Northrup House had come into existence, he was innocently passing by when Lewis “Lute” Northrup’s giant, slobbery St. Bernard dog ran out and jumped on the fence.

Roy’s horse was so terrified that it ran away with him down the street, and although he held on for as long as he could, was eventually thrown from the buggy when rounding a sharp corner.

Having fallen right on his head, Roy lay stunned until help arrived.

Although shaken up, he wasn’t seriously hurt, and so the trembling ghost scooped himself up along with the help of other spectral apparitions.

I myself could only watch as they disappeared into the early morning mist.