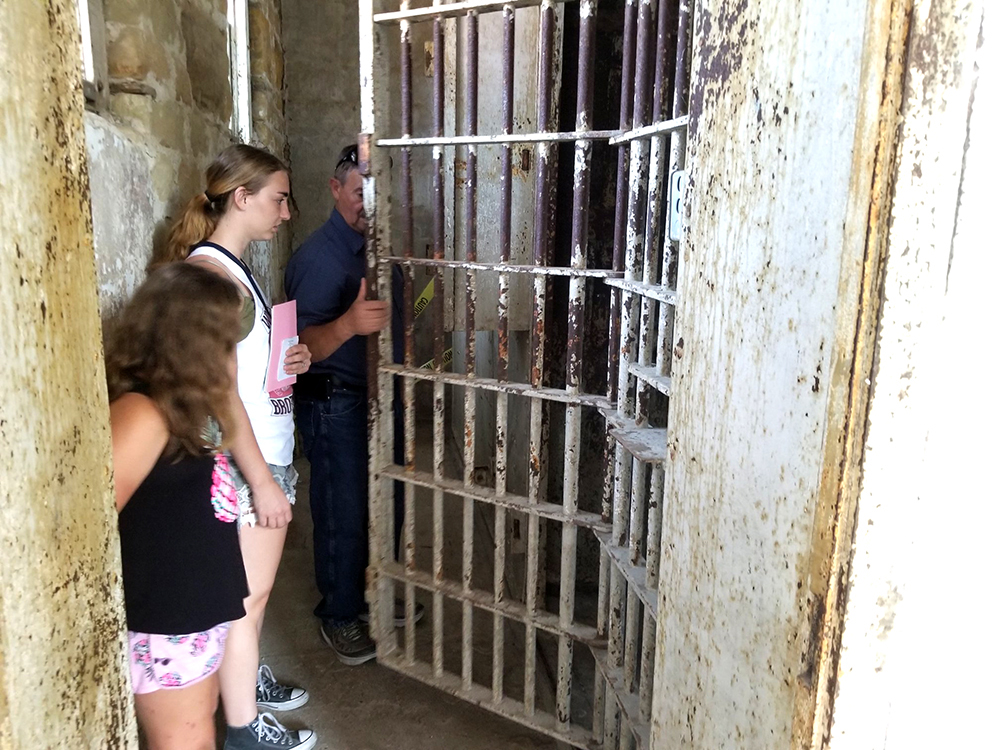 Historic Woodson Co. Jail: Get the torches and pitchforks

A visit to Yates Center's old jail coincides with a retelling of a 1915 bank robbery.

A snowy sky hung dimly over the Yates Center square as I pressed my face against the glass of what was once the State Exchange Bank.

I imagined the teller counter had returned, the bars, the safe and two unassuming young men entering the door in February 1915.

Unmasked and well-dressed, they strolled to the desk around lunchtime and asked whether a “Mr. Hines” had been in.

Before the cashier W.J. O’Donnell could answer, though, he found a .33 caliber revolver staring him in the face.

“Throw yer hands up and hold ‘em high,” growled one of the genteel fellows, as the other scrambled up and crawled through the opening of the teller window.

In four minutes flat, over $4,000 in cash had been liquidated, and in a flash, the thieves were out the door.

I imagined them bursting past me through the exit, causing me to reel backward toward the “painless” dentist office that once stood next door.

No sooner had they gone, but I seemed to hear the muted sound of poor O’Donnell yelling at the top of his lungs from inside the locked vault.

The ghost of a woman named Blanche Winters pressed inside the building, and with keys in hand, managed to free the flabbergasted prisoner.

Soon the hunt was on.

Everyone in town had been beset by a lolling panic, with Model-Ts and rumors tearing about in every direction.

Who were these demonous outsiders who’d dared intrude upon our placid villa? And what terrible disease of sloth and violence had they brought with them?

This is OUR TOWN!!

Get the torches and pitchforks …

JUST in the nick of time, ol’ “Bill” Reedy screeched to a halt in front of the bank, then raced inside to inform Sheriff Carrol he’d spotted the thieves making a break for it on the edge of town.

To reenact the scene, I leapt into my car like the Sheriff and his posse, racing east as closely as possible along the rail trail as if voraciously hunting the license plate of some out-of-town flapper.

I was sure I could see the faint outline of their tracks as I approached.

And sure enough, there they were, the two miscreants shivering in the bushes near a sycamore with faces pale as milk.

The Sheriff had his gun leveled, and O’Donnell was sneering, “Young man, hold your hands just as high as you made me hold mine.”

Instinctively my arms shot into the air!

With this, multiple heavy bags of cash heavily thudded to the ground, setting bills blowing in the wind.

Realizing that they couldn’t actually see me, I left the deputies to their duties and crept slowly back through Yates Center to find the townsfolk scurrying everywhere like venomous ants.

Hundreds of shotguns and rifles, hammers and knives were being brandished in rage.

Peoples’ blood was up, and red filled their eyes. Not a good time to be passing through.

Little did they realize the targets of their fearsome ire were already in custody, safety confined and unable to further contaminate the unsoiled air of the little town’s purity.

DAYS passed, and Harry Milton and James Harmon were on the verge of losing their minds.

They paced back and forth within the steel walls of the sandstone jail, anxious and angry.

How long had they been there?

But three weeks had begun to feel like three millenia, especially without whiskey and cigarettes — not to mention the endless hollow tolling of the Baptist Church bells nearby.

Milton, whose real name was Jesse Billings, had no intention of staying put; and when the moment arose, he took it.

Using the stray piece of metal he’d filed to a knife-point, he threatened another prisoner to help them escape the interior cage, then he and “Jimmy” wriggled through a hole in the ceiling.

Despite someone spotting them make a run for it nearby, past the original courthouse (from Defiance) and collection of businesses once called “Smoky Row,” soon they were home-free.

Frigid wind whipped at their thin uniforms, turning their skin cracked and blue as they again hobbled down the railroad tracks, but they had made it.

That is, until they were arrested two months later and banished to the state pen at Lansing.

Milton got 21 years. The max. Baby-faced Harmon, a slap on the wrist.

BENEATH the massive catalpa tree that hangs over the old stone jail — which hides behind the northeast corner of the Yates Center square — I stared in awe at how the two men had managed to escape.

The structure seemed impenetrable, like the shadowy darkness inside.

And after gaining access to the jail’s interior, I was even more impressed: not only by the heavy bars and unbreakable latches, but by the endless rambling graffiti still visible on the walls.

Though condemned as unfit for human habitation in 1963, the jail continued to operate for another four years.

MORE recently, I’ve been rereading “Walden” and “Civil Disobedience” by Henry David Thoreau, which led me to imagining him there behind similar bars, imprisoned for refusing to pay his taxes.

Not wanting his money to be wasted on supporting the brutality of slavery or the imperialist conquest of the Mexican-American War, he was condemned to rot.

At least until an anonymous benefactor, perhaps Ralph Waldo Emerson, bailed him out.

Despite the brevity of his stay, the experience led him to conclude that “[u]nder a government which imprisons any unjustly, the true place for a just man is also in prison.”

Yet how many have the courage to disobey in such fashion, thereby requiring us to rethink our attitudes towards those we find incarcerated?

And how do we not conflate those who disregard the law due to a childish refusal of orders (given for the common good), with those who draw attention to injustices being done to others?

The saints and revolutionaries of the world are too often grossly misunderstood.

Yet the torches and pitchforks await them just the same.