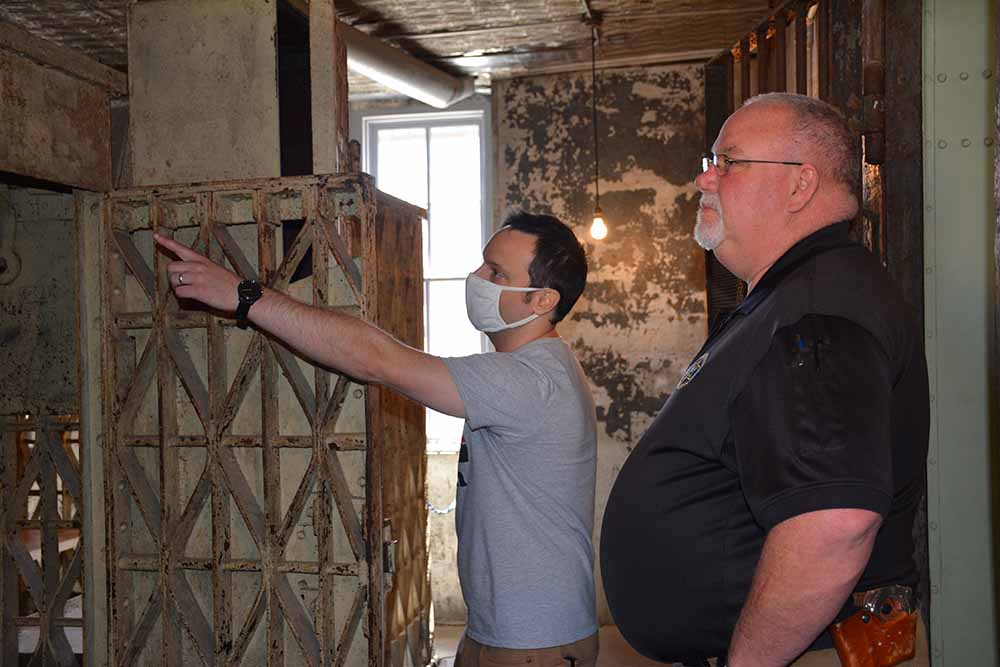 The ghostly echoes of 'the strongest, slipperiest and most expert lawbreakers' still haunt the original Allen County Jail, if you know how to listen for them.

Some are trying to escape. Others teeter on the brink of madness. A few are just plain drunk and disorderly.

Last time I walked by, the specter of Ada Rogers was busy sneaking her incarcerated husband various firearms, irrepressibly repeating an event from the summer of 1881.

She and two accomplices were eventually captured north of Burlington, and sentenced to five years hard labor.

This wasn’t the first time something of the sort had happened, either.

One of the first records regarding the limestone prison from 1870 notes how, on another hot summer night, “six prisoners escaped from the jail by sawing off two of the bars of the window grate.”

They, too, got help from an outsider.

The jail had barely stood a year and already its capacity to “hold the strongest, slipperiest and most expert of lawbreakers” had already come into question — especially after an angry mob lynched Elzy Dalson by pretending to be transporting a prisoner from Chanute.

For some, their struggles bound to the jail were psychological, like Thomas Vanmouse of Elsmore.

After speaking in tongues and being “possessed by the spirit” at a religious gathering (1895), he was thrown behind bars and left to rot after being judged insane.

Another desperate fellow by the name of Erickson had also been judged insane — 13 years earlier — and after his “friends” admitted him, he was found hanging from a makeshift noose in his cell.

If you’re quiet as death, you can still hear the echo of Erickson’s weight shifting and swinging as you tour the jail’s first floor.

Better to end it all quickly than be shipped to the hell of Osawatomie asylum with its thousands of lost and murmuring voices.

Better to meet the Void … after first scratching your will on the walls.

BETTER to have a drink and forget it — like Lulu Rosenburg, who in a news story from Halloween 1916, is reported to have gotten stumbling drunk before visiting her friend Anna Badgley, who’d been imprisoned for operating a house of ill repute.

Lulu already had the dubious distinction of being the first woman in Kansas sent to the penitentiary for repeatedly breaking Prohibition laws, and so was perhaps a bit numb to the prospect of being busted again.

But sure enough, remarking upon her impressive level of intoxication, the jailer decided that Rosenburg and Badgley should share a cell.

At night, near the northeast corner of the square, you can still hear the haunting yet heartwarming cackle of the two women as they laughed and talked and cried beneath limestone walls separating them from the starry darkness overhead.

Not surprisingly, Lulu wasn’t the only one to run afoul of the law in relation to the Devil’s Brew and end up in the pokey.

In 1884, Frank Babbitt, the county attorney, managed to convince other Allen County authorities that he could be released from the old jail so long as he paid all his legal fees.

He’d spent two months locked up after being convicted of selling whiskey.

Babbitt was especially fortunate, as a few short years later county commissioners decided that those imprisoned should pass the time by breaking rocks with a sledgehammer — perhaps to really stick it to those thespian degenerates who’d dare to schedule performances on a Sunday (1911).

As with all blind, fierce and traumatizing punishment, such “reforms” of course caused all crime in Allen County to abruptly come to an end, as well as forever reformed and bettered the character of those subjected to such indignities.

What other explanation is there for the fact that, after being incarcerated during the blazing summer of 1905, the saloon keepers in town paid to have fans installed in the already crumbling jail, including one in the jail’s main office (for free)?

ON A RELATED note, one actually and weirdly humorous series of “crimes” connected to those who did hard time in Allen’s earliest days regard sexual improprieties, many of a nature that U.S. courts no longer hear today.

Residents should perhaps beware, however, since according to sheriff Bryan Murphy, “adultery is still on the books.”

Stepping out on one’s spouse was not only considered immoral, but illegal, and hence “a person guilty of the crime of adultery [in 1904 could] be punished by six months in the county jail and a fine of $500.”

Indeed, in 1921 Iola police raided the West Street Hotel after “checking up the registry and selecting room No. 3.”

“They entered and found John Doe and Mrs. Mary Alias. They were placed under arrest and taken to the county jail. Before Judge Bartels … they were guilty of immoral behavior and each fined $100.”

Perhaps the most peculiar and noteworthy case of this kind, however, raises its spectral head in August 1906, when a fellow named Ira Tansey from Gas City and an unnamed Iola woman were arrested for “misconduct.”

“The mayor and some of the officers had seen the woman go into the residence of Tansey on south McRea several times and knowing his wife was away visiting in Missouri decided that the visit should stop.”

“At the appointed time Officer Hayt entered the house and found the Iola woman and Mr. Tansey sitting at a table with a couple of bottles of beer beside them.”

“They were taken in charge by the officers and hustled to the jail.”

For shame! It’s the rock-pile for you!

And don’t think they’ll go easy on “the fairer sex,” either, as evidenced from a case in 1911 when the local judge, D.B.D. Smeltzer, found himself searching for a pair of bloomers to fit Ella Reese while she worked on a street gang.

I darkly dream Reese there, exiting the old limestone structure in her “normal raiment,” cursing the August heat as she prepared to march across town or jump onto a wagon bound for labor on some of the county’s roads.

AS FOR LABOR of a different kind, battles by workers for fair pay and safe working conditions often resulted in imprisonment, especially for those considered to be organizers.

In 1920, for instance, Union men August Dorchy and Thomas Harvey of the Mine Workers of America ended up “staring at the faded ceiling in the Allen County jail” in connection with a mass protest scheduled to take place in Girard.

Almost certainly, Dorchy and Harvey were removed to the facility so as to hamstring the demonstrations and rallies, though their imprisonment was given the air of legality by claiming that the Union officers had been in contempt of court.

Likely possessing no evidence to hold them, the men were bailed out from their moldy cells two days later, after the protests in Girard were over.

As it has functioned so many times throughout history, incarceration and the law were spuriously wielded against those seeking justice.

Yet their revenant voices join the chorus of a thousand others, rattling the streets in a seismic wave of transformative energy that echoes still today.