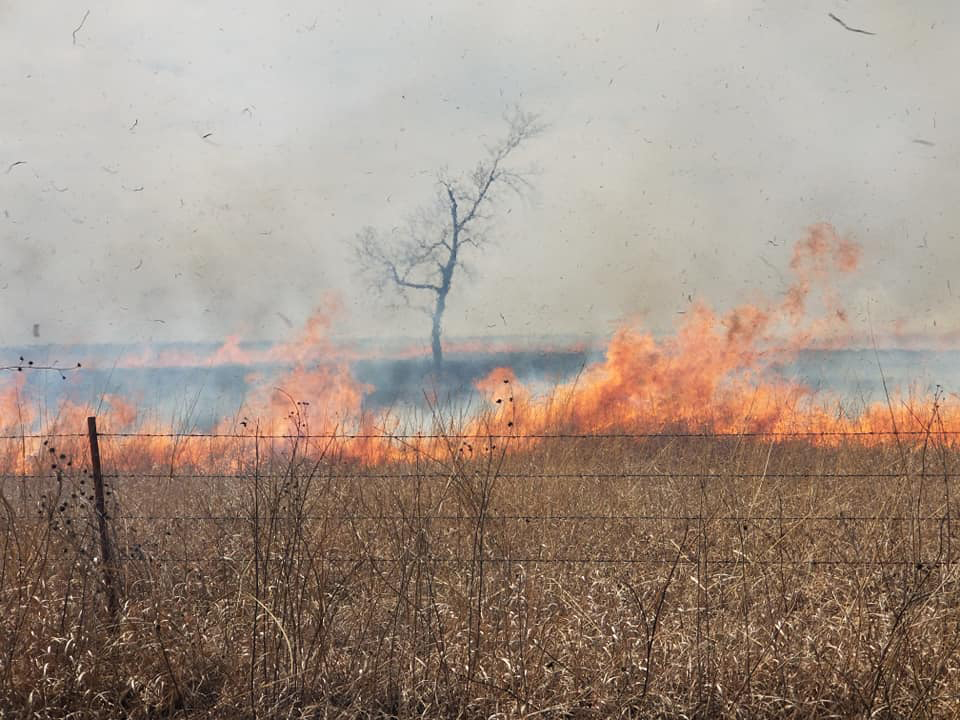 The story of a former slave's challenges contrasts against the burned prairie at a cemetery site.

I stood transfixed behind the barbed-wire fence by the side of the gravel road, watching in awe as bright orange fire snaked across the pasture in Liberty Township.

The air was heavy with dancing smoke that turned the air a hazy blue and obscured my view into the distance where a single tree with gnarled black branches stood.

An April wind suddenly began to churn in the southwest, such that what had been a controlled burn began to surge hungrily in my direction.

Flames leapt more than a dozen feet into the air and soon the soot was swirling frantically all around me.

A monstrous roar sounded, an insane popping and crackling of dry brush mixing with an atmosphere pulsing and bursting with movement.

In “Prairyerth,” William Least-Heat Moon described a similar scene as “red-gold on jet, angles and curves, oghams and cursives of flames, infernal combustings.”

Despite feeling intense heat on my face, at first I was immobilized, shocked still as “the red buffalo” began to stampede near the fence-line.

Realizing almost too late there was no fireguard burned along the roadside, fight turned to flight as I spun around to race for the open car-door.

As I sped away, I watched through the rear-view mirror as flames gnashed at the roadway where I had stood only moments before.

The 25 million year-old indigenous ritual of cleansing and inoculating the prairie had almost purified me as well.

Realizing what parallel I had found myself on, I proceeded slowly down the gravel road to the east, gazing into the distance at columns of smoke rising in almost every direction.

During the spring burn, rural Kansas looks like a war-zone, a volcanic blast site.

At that moment, an ambulance tore by, lights flashing red and blue, and I wondered who else had gotten a little too close to the flames for comfort.

SLOWING to a stop as I came to the northerly bend in the road, I could see white crosses adorning the field in Goings Cemetery, marking out a fraction of the 50 people interred there.

At one time you could have also seen a number of raised sandstone vaults that had once been a unique feature of the pioneer burial-place — situated along the LeRoy-Eureka trail — where long smooth stones had been quarried and dressed nearby, then fitted together with iron bars.

The vaults are all gone now, having been mostly shattered along with the names they bore like those of Sarah Pickering and her daughter, who along with several other wagon-caravan travelers perished from some lethal disease such as cholera, tuberculosis or smallpox.

People used to place animal bones around the sarcophagi as a prank, in order to scare the living daylights out of small children or friends.

More recently, someone claimed their cracked remnants were resting in a barn nearby, so as not to be further damaged.

Inside the gate, you could see how a burn had been allowed to tear through the graveyard, scorching most of the field but leaving the sunken grassy halos around the graves untouched.

Amid the ashen “prairie coal” contrasted several bright green ovals adorned with tiny yellow dandelions, and it was possible to see just how many bodies occupied the now-unmarked plots.

Though long dead and dessicated themselves, as the cemetery’s only two trees keep close company with the deceased, they were spared the cleansing burn as well. This last summer, they were filled with enormous bumblebees.

Oddly enough, in “A Sand County Almanac,” Aldo Leopold notes how most trees in the midwest are only as old as the first white settlements (and cemeteries) here — dating to the mid 1800s — precisely because widespread farming led to the cessation of most prairie wildfires that had until then prevented them from growing.

If you don’t believe him, he dares you to count the rings.

Fires have certainly been part of shaping the landscape of Goings Cemetery; for when I last visited it was as if the mouth of Hell had been invited to open and paint a chilling image there of an afterlife spent in perdition.

Not that the cemetery’s namesake, Randolph Goings (1840-1871), needed any additional reminders, as it seems his own life was already hellish enough.

He and his first wife Lucy Jane were born slaves near Charlottesville in Albermarle County, Virginia — ironically, the same birthplace as county namesake and life-long advocate for slavery, journalist and territorial secretary, Daniel Woodson.

I therefore view Woodson and Goings as foils or inverses to one another, though it’s doubtful the two men ever met.

Before coming to Kansas by way of Ohio, Goings and his family first had to secure their Free Papers, which listed them as “mulattos.”

For whatever reason, in Ohio he became estranged from his first wife and six children, which likely had something to do with meeting a woman by the name of Mary K.

As Mary was white and Randolph was multi-ethnic, you can imagine it caused quite a stir, especially since they had to stop along their path to Kansas in Illinois so that Mary could give birth to a son named Thomas.

In 1858, Goings and his new family settled along the big bend in Turkey Creek, atop a rocky knoll east of the cemetery, where water is typically shallow and the undergrowth so thick and wiry you can barely traverse it.

A few decades ago, paleontologists from Emporia State University found what they believed to be dinosaur tracks along the creek bed, and though I’ve yet to see them, the rancher who lives nearby swears they exist.

During their time at the cabin near the creek, four more children were born to Randolph and Mary, including Sarah and Mary Etta, who although they evaded a permanent stay in the little burial place covered in fire and dandelions, eventually faced some serious travails of their own.

As records are spotty, it seems the only battle we know of Randolph facing for sure after the horrors of Virginia slavery were to battle with Woodson County commissioners in Neosho Falls over the placement of a road near his home. (He won.)

However, as one of the only black or brown pioneers in the county at the time when the Bleeding Kansas conflict was determining whether or not slavery would be legal there, it doesn’t take stretching the imagination much to figure Randolph and his white wife led incredibly difficult lives.

Let’s be honest: given the lingering specter of such racism, their relationship would be derided and condemned by many in southeast Kansas even today.

After Goings died in 1871 when he was only 31 years old, and Mary K. shortly after, at only ages six and four, the little girls Sarah and Mary Etta became the wards of pioneer neighbor Asa Whitney, a figure who casts a rather long shadow across the county’s early history.

Whitney was a commissioner who had a school named after him, which still stands today though it’s been used as a shed for cattle supplies for years now. But he was also accused of serious crimes by Sarah Goings while she was a teenager, both against herself and her father’s property.

What Whitney was indicted for, we may never know, but he was nonetheless acquitted.

But the trouble didn’t end there. When Randolph’s first wife got wind that he’d died, she too tried to seize his land-holdings and property from Sarah and Mary Etta. (The girls lost.)

It’s a complex family drama that, though fragmentary, reveals how the emotional and legal difficulties of life do not belong merely to our own time.

Thus when you stand in the seemingly tranquil little cemetery that bears the Goings family name, and is Randolph’s final resting place, it’s impossible not to feel the sadness and the anger born of their daily struggle to survive.

A calm spring wind may sing from Turkey Creek across the naked plains, but if one is attentive, you can still feel the fire of Randolph Goings.