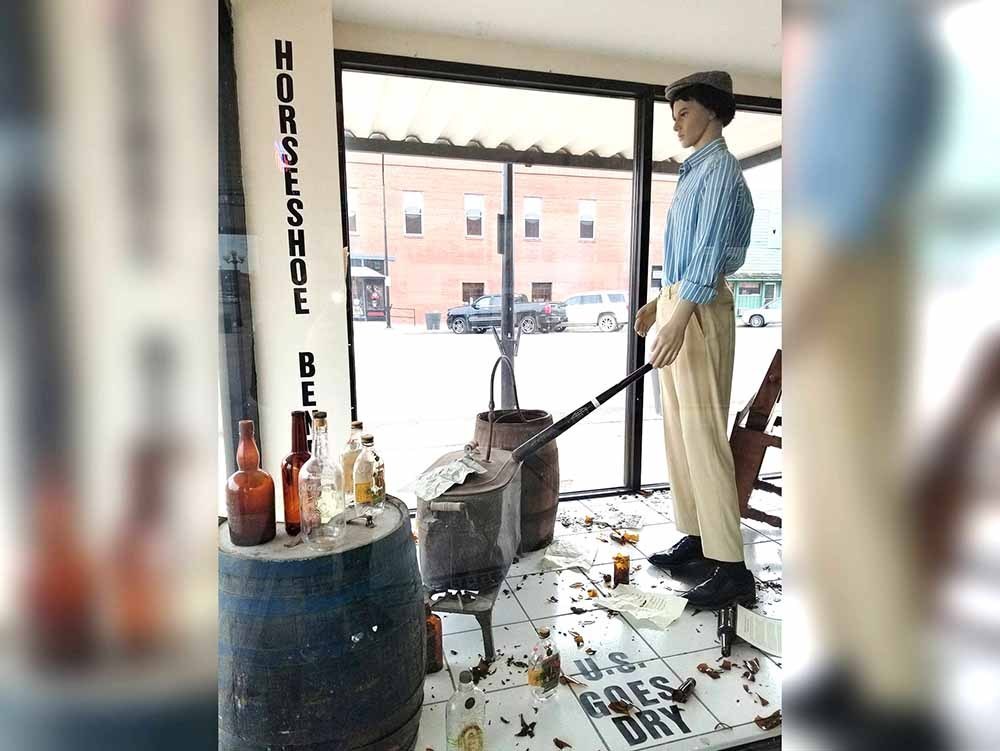 Getting bent along Horseshoe Bend

The years of prohibition created a bootlegging culture even in conservative places like Allen County, including a place still called Horseshoe Bend on the Neosho River.

A yellow-white sun was descending the horizon in northern Allen County, not far from a place still called Horseshoe Bend on the Neosho River.

Soon, the setting sun spread a fiery band of color, illuminating the fields littered with corn cobs and stalks.

The detritus sent my mind spinning.

“It’s strange,” I thought after setting down my whiskey glass on the nearby table back home, “This was an illegal act for almost half of Kansas’ history.”

Perhaps longer than any other state in the nation.

Almost exactly 100 years ago, the federal ban on alcohol was enacted due to the 18th Amendment to the Constitution.

At the time, someone in Iola wrote “prohibition is effective at midnight tonight … and declares places where liquor is sold to be common nuisances.”

No more public procurement of hooch, spirits or sauce.

And thereby, like many other reigning political issues, was an adjoining claim that rural America had imposed its more conservative values on the rest of the country.

Given today’s acceptance of alcohol, it’s hard to believe it was once regarded as an ill worth stamping out in the name of protecting society.

As a child around my grandparents, for instance, and in turn around their grown children, alcohol was never really a welcome guest at family dinners.

Now, there are parts of the U.S. where you can readily and legally procure full-spectrum THC cannabis products of all kinds, alcohols of unlimited proofs and even exotic items like psilocybic mushrooms.

For most of human history, there have been debates about whether or not one was free, without judgment, to transform and manipulate one’s consciousness via substances of all kinds.

But some, like Charley Melvin, Iola’s “Mad Bomber,” felt so strongly about it that he set out to destroy Iola saloons, maintaining imbibers were on the path to Evil.

So what of those local renegades, who for profit, proving freedom or whatever, have endeavored to flout the laws regarding substances?

From the outset, it’s interesting how we valorize and romanticize the bootlegger, while typically deriding those who peddle other mind-altering substances. Different substances garner different responses in terms of how they are accepted socially, and in reference to the groups who regularly use them.

Not long ago, I returned to Horseshoe Bend, after first journeying there with commissioner Bill King on an afternoon field trip.

He drives perched forward in his seat and talking fast, his mind always exceeding the speed at which his words can articulate. I’ve come to respect him as a statesman, always thoughtful in his responses.

Later I returned to the Bend on my own, looking for remnants of the Townsends and their bootlegging operations, wondering what there remained to find.

I first parked at a distance, not wanting to risk my Firebird getting mired in the sludge.

Then I walked north, towards the tiny Townsend family cemetery. It sits rather inconspicuously in the middle of the enormous cornfield, but you could be within 40 feet and still miss it.

The Neosho River arches to the east. There are also places one can climb up the bank to the riverside, where two whitetails recently erupted into flight upon my crashing presence.

I knelt over the two graves anchored there: Archie Townsend and John Cornell, wondering just how far away and precisely where their families had lived.

Could I dream while waking, and encounter the Townsends going about their business, their trying to carve out an existence on the margins of the law?

It wasn’t long until the authorities arrived, that instrument which would dramatically enforce morality along the wicked twist in the river.

“So many of the boys about town had been getting stewed up and ossified that the county and city officials whose duty it is to enforce the law began taking copious notes on the source of the supply.”

I dreamed them there, lights bright and sirens sounding, their antique cars hurling mud from along the narrow roadway.

When Chief Federal prohibition officer, Warren Wilson, climbed out to observe the scene, I hastily took cover behind brittle grass along the edge of the field.

Wilson had already swept through Iola, investigating grocery stores that were selling 80-proof peach extracts or simply “Peach” for short.

When Wilson later stormed the Townsends, he came across $1,000 in sweet wine made from elderberries and raisins, and not long after began pouring the effervescent beverages into the muddy river.

It was even more tear jerking than when, in Aug. 1925, Sheriff Custer David confiscated 55 gallons of Old White Mule and then ceremonially released it into the Iola sewers.

Luckily for Abe and George Townsend, no case could successfully be made against them, as no one would admit to buying, thus implicating themselves, and the Townsends had skillfully hidden their stills and other production equipment.

They’d live to “light up” the no-so-quiet town another day.

Like, almost two decades later, when Abe was again arrested and sentenced to 60 days in jail, after officers uncovered 450 gallons of wine.

They found even more weeks later, in barrels buried beneath the Townsends’ machine shed. Carl Huey, a former disgruntled employee, had turned them in.

Alcohol busts were becoming an everyday facet of the culture, though of course enforcement was not always the same, especially between places like Iola and Humboldt (with its “high-toned whiskey vendors”).

It’s interesting to see how social norms have transformed our attitudes over the past century to the point where many likely now feel sorry for the Townsends.

Perhaps we might even believe we have some sort of duty to protect men of that caliber and audacity from the overreaching arm of the government and its various legal enforcements.

All the same, to this day Kansas still has some of the strictest alcohol laws in the country, with multiple dry counties, and remains one of only a handful to have not legalized cannabis/THC for either substantial medical or recreational use.

In another 100 years, what will people retroactively believe about the substances that surround them, along with which ones are deemed dangerous vs. acceptable?