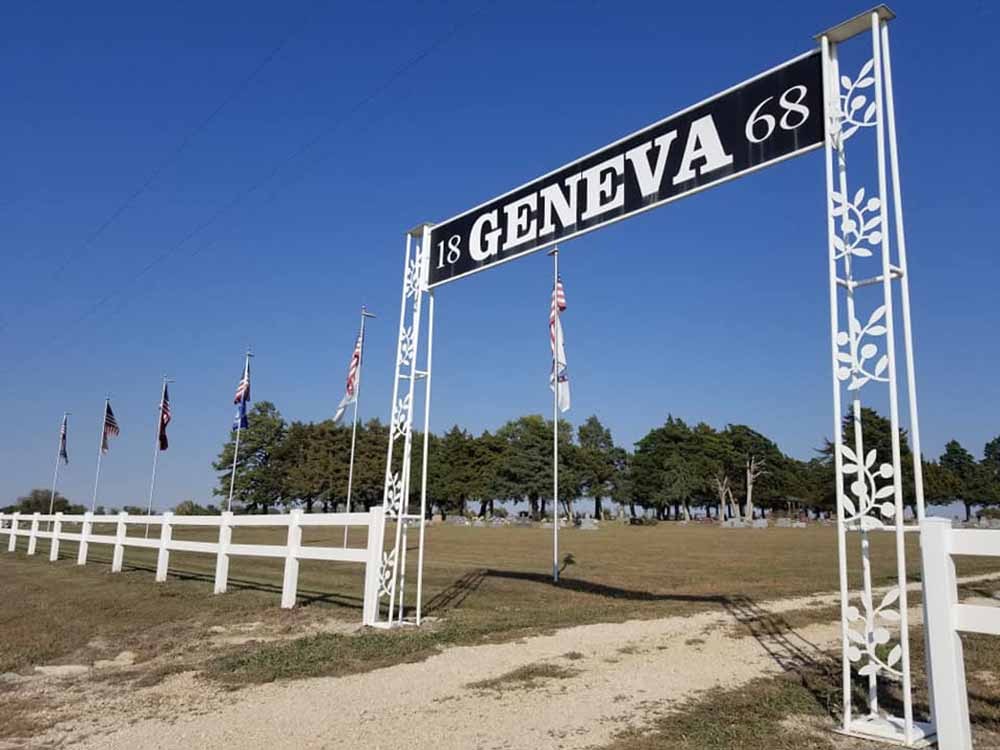 Geneva’s memory is deep, with roots stretching back to the very beginnings of white settlement in Allen County.

Richard Fuqua (pronounced Funqway) set up shop to trade with the indigenous people of the area before Geneva and its sister city, Neosho Falls, had even come into being, in his cabin on a rocky hill beside a now almost-dry bend in the river.

Fuqua and his family arrived in the deathly frigid winter of 1855, bringing along with them about 60 head of cattle, and he took advantage of a nearby labyrinth of limestone that formed natural “chutes” to drive them to slaughter.

Running my hand along the pale stone formations one fall afternoon, I dreamed them there, the cattle pressing roughly through various apertures, calling loudly, perhaps already smelling the blood of others.

And above the din were the Fuquas, driving and prodding, east of the derelict log cabin that had once been their home.

While at the cabin as well, which had already been abandoned by the time early colonists arrived at Geneva, Fuqua and his sons, Leonard and William, acquainted themselves with the Sac and Fox tribe who camped along the river.

In order to gain their favor, Fuqua held sumptuous feasts featuring enormous kettles of stew, and in return, the native people showed their appreciation by performing intricate ritual dances.

Despite being friendly with the Sac and Fox people, especially when it came to wheeling and dealing, it seems by contrast Fuqua and his sons had trouble getting along with other whites.

In reference to a land battle, for instance, it’s noted how “Fuqua used his rifle as a club and Mr. Esse’s head still aches when he thinks of the blow he got that day.”

“J.E. Redfield also came in contact with this same gun barrel and for awhile it was thought he had received his death blow.”

Not surprisingly, then, at one of the first court meetings at Cofachique, Allen’s first (proslavery) county seat, several indictments were leveled against the Fuquas, though they somehow managed to escape prosecution.

Leonard Fuqua even went on to become the first sheriff of Woodson County in 1858.

AS FOR Geneva itself, a fellow by name of “Lawyer” Adams recalled visiting the settlement between Martin and Indian Creeks when it was still called Eureka, and hence made a bad pun about how the colonists must have “found it.”

He writes “I found the place and found that the town consisted of a hole in the ground (where they had been digging for water), and the people camped around the creek.”

Adams also mentions people gathering around Fuqua’s abandoned cabin, and a conversation he had with “Mr. Spicer and Dr. Stone” about how the structure was to become a Sunday school.

Thinking Adams was a minister based on his “two-story hat,” they even tried to recruit him, perhaps secretly to talk some sense into the infamous A.C. “Bully” Smith, who lived nearby on Martin Creek.

In contrast to the early abolitionist Genevans, Bully was a proslavery man and had thus been terrorizing the “Yankees” there, who literally happened to be from New York state.

For instance, when he suspected his new neighbor Anderson Wray had filed a spurious claim on his land, he saddled his mule and rode in a huff towards Fort Scott, trying to beat him to the land office.

When Bully found Wray camped along Turkey Creek in Bourbon County, he stormed into his tent and shot him point-blank in the leg with his revolver before anyone could stop him.

Bully Smith’s reign of terror spilled over into Woodson County as well.

One day Smith was drunk as a skunk and stumbled from Geneva over into Neosho Falls.

Furious at the world, he started cursing up a storm to anyone who would listen … $%#$! #$&^#@!, and when no one would pay him any mind, he launched a rock through the window of town founder and ornithologist Nathaniel Goss.

Despite his claim that “No man can take me alive!” Goss had Bully arrested and fined $10, which he reportedly paid with a single Golden Eagle coin.

Legend has it, this was the first money to ever belong to the fledgling county as such, and so the first funds to ever grace Woodson County’s coffers … then equal to treasurer Haughawout’s pocket … came by way of a drunk and disorderly Allen Countian.

Oddly enough — perhaps because he was out so much money — a penitent Bully later returned and apologized to Goss.

A wise and thoughtful man, Goss agreed to forgive Bully and return his money, though on a rather humorous condition.

Bully was required to buy whiskey for all the gentlemen in Neosho Falls and Geneva, and afterwards, so the story goes, they all became “exceedingly happy.”

Bully would later migrate to Montana so as to become an attorney like Col. Goss, and spend the rest of his days winning arguments by “shooting off his mouth instead of his gun.”

IN STARK contrast to the rough exploits of the Fuquas and Bully Smith, Geneva’s historic claim to fame came in the form of a refined institute of higher learning.

The town already featured two stores, a hotel and blacksmith shop, grape and sorghum farms, a wagonmaker, two carpenters, a lime kiln, and two churches, and by 1866-67 boasted of its very own Presbyterial Academy (which in its third year had 68 students, nearly half of whom were female).

Situated on the north side of the quaint village, the regal two-story building sported an elegant rounded cupola and was surrounded by a lush 10-acre plot enclosed by a hedge fence.

Standing by what I believed to be the academy’s old well near the academy’s southwestern corner, I dreamed the professors and students there, rushing to class, set on their at-once both sacred and secular mission.

I dreamed them completing their final examinations, then giving “orations, declamations and compositions” to a curious crowd, many of whom had likely not had the opportunity to complete primary school.

I dreamed elegant recitations of Homer sung in Greek and Virgil in Latin.

Having been a professor myself for years, the image brought burning tears to my eyes, both at my own unbridgeable separation from what had taken place there, but also at the thought of those so inspired by education as to trek halfway across the entire county on wagons through oft-impossible terrain.

Some nearer to home were also inspired as well, such as Professor Dilworth from the Normal School at Emporia (forerunner of Emporia State), who became the academy’s principal in 1873.

He was considered by many to be one of the best teachers in the region, though his tenure, like so many others connected to the institution, was not to last.

After 1878, mentions of the academy as such disappear from the records, and so it seems its total life lasted only a little over a decade.

The structure would later become a church, as well as a meeting place for the Modern Woodmen of America.

In 1940, the rotten and dilapidated building was razed to the ground, leaving only an ephemeral and haunting presence on the wind, its once-high ideals blown apart to ashes.