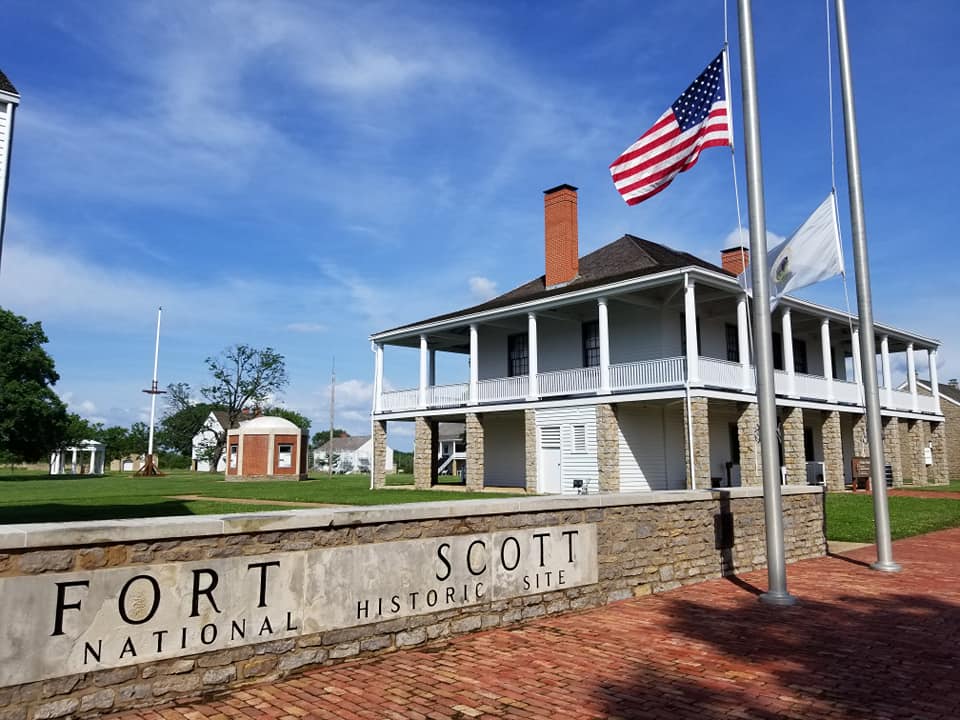 Fighting boredom at the fort

Early life at Fort Scott was filled with boredom, with a desertion rate as high as 16 percent. The fort's history includes a variety of Civil War-era uses, including training Black soldiers for the Union, as a supply depot, military hospital and prison.

The plains perfectly still as the clock strikes slowly.

Such was early life at Fort Scott for most soldiers, who were cranky from living in tents, and with only the occasional prostitute or whisky-peddler to liven things up.

Many of the officers had brought personal slaves with them, but they were focused primarily on their unpleasant labors as opposed to entertaining anyone.

Hence the grog shop just across the Missouri border was a constant temptation, with soldiers often going AWOL while drinking at the joint.

In fact, desertions ranged as high as 16 percent, thanks to boredom, bad pay and outright hatred for military life.

As for those who remained, in the words of Capt. Thomas Swords, “wolf chasing and duck hunting” were about the only way to stay sane.

THE fort’s story stretches clear back to April 1842, when soldiers first arrived on the spot from Fort Wayne to the south in “Oklahoma” (aka Indian Territory). It was christened for General Winfield Scott, who himself was nicknamed “Old Fuss and Feathers,” given an insistence on military decorum.

The Cherokee didn’t care to have Fort Wayne so close in proximity to their territorial lands, which had precipitated the relocation efforts, along with the desire to provide settlers and Native people some measure of mutual protection from one another.

The Osage, for example, had been conducting raids in response to white encroachment throughout the area, and the situation had become increasingly violent.

Oddly enough, though, the fort itself didn’t have defensive walls, as the wide-open views and high-powered artillery made such an enclosure unnecessary.

Capt. Swords, the quartermaster, didn’t have much lumber to work with anyway, since the Kansas prairie had few trees, and significant building materials had been destroyed in various strange accidents.

Nonetheless, when he subjected the fort to inspection in 1844, Col. George Croghan said, especially in comparison to other frontier battlements, that still he found the setup to be “above average.”

That assessment didn’t prevent Fort Scott from falling into disuse, though, as in April 1850, it was decided to cease further construction after eight years of work and $35,000 spent.

No fighting had taken place there, and the Mexican-American War had become of primary importance at the time.

FORT Scott’s second life would arrive just prior to the Civil War.

After its military buildings were sold to civilians, two were converted into hotels, namely the pro-abolition Fort Scott Hotel and the pro-slavery Western Hotel.

As they weren’t that far apart, you can imagine how tensions were simmering at a near-continuous boil.

At the time, most residents of Fort Scott supported slavery, with one group traveling west to establish Cofachique, Allen County’s first (proslavery) settlement, and who engaged in murderous activities in both Allen and Woodson Counties.

But most folks in the Kansas Territory outside Fort Scott were abolitionists, so it’s not hard to envision all the screaming matches and straight-out fist fights over the matter.

Local incidents of murder, attempted arson and more were all totally commonplace.

DURING the Civil War itself, Fort Scott once more became a military post, and in August 1861, the Union Army took command.

Troops arrived from as far away as Colorado, Indiana, Iowa, Ohio and Wisconsin, and were sent forth to “subjugate” locations in Missouri, Arkansas and “Oklahoma.”

Of note as well, is that Fort Scott was one of the only places that trained Black soldiers, namely, for the United States Colored Troops of the Union Army.

The Fort’s major supply depot made it a target for Confederate General Sterling Price, though he was never able to mount a successful attack.

By contrast, the fort’s hospital facilities and on-site prison were quite effective, and would remain in use until after the war’s bloody and bitter end.

FIVE years later, in Jan. 1870, the Army returned to Fort Scott with the formation of the Post of Southeast Kansas.

Interestingly, soldiers rarely used the original fort, and preferred to camp along the nearby railroad tracks.

This was in part due to their charge, namely, protecting railroad property and workers from angry settlers, who’d formed Land Leagues in order to defend their claim to properties upon which they had squatted and thus believed they owned.

Indeed, it’s possible that Leaguers who organized in Allen County near Elsmore, for example, actually hated the military, since they were viewed as toadies or lackeys of the powerful railroad interests that threatened their land claims.

By the spring of 1873, however, the US Army withdrew troops from Fort Scott for the last time, and it would take until 1965 before major efforts to preserve the historical structures would begin, following action by the National Park Service.

THANKS to local efforts, today you can visit an impressive array of structures from across Fort Scott’s lifespan.

For instance, the original hospital has been converted into a visitors’ center, and the infantry barracks has been reconstructed to become a museum containing many period artifacts.

Dragoon stables of impressive length along with a dragoon barracks have also been reconstructed on the fort’s northwest side, as was the Post Headquarters where many courts-martial took place.

Original officers’ quarters have been restored as well, including the posh spaces where Capt. Swords and his wife once lived.

Other buildings include a restored quartermaster storehouse, a reconstructed prison guardhouse and powder magazine (for storing explosives, cartridges, primers and fuses), and my personal favorite, the restored post bakery.

Bread was a staple of a Fort Scott soldier’s diet, and they were sustained by a daily ration of about 18 ounces.

Close your eyes, and dream the smell of warming flour as it lingers about the place, bursting and blending with the prairie air. Let the ghostly smell surround and permeate your nose.

Feel the power of the past as its folds make the present possible.