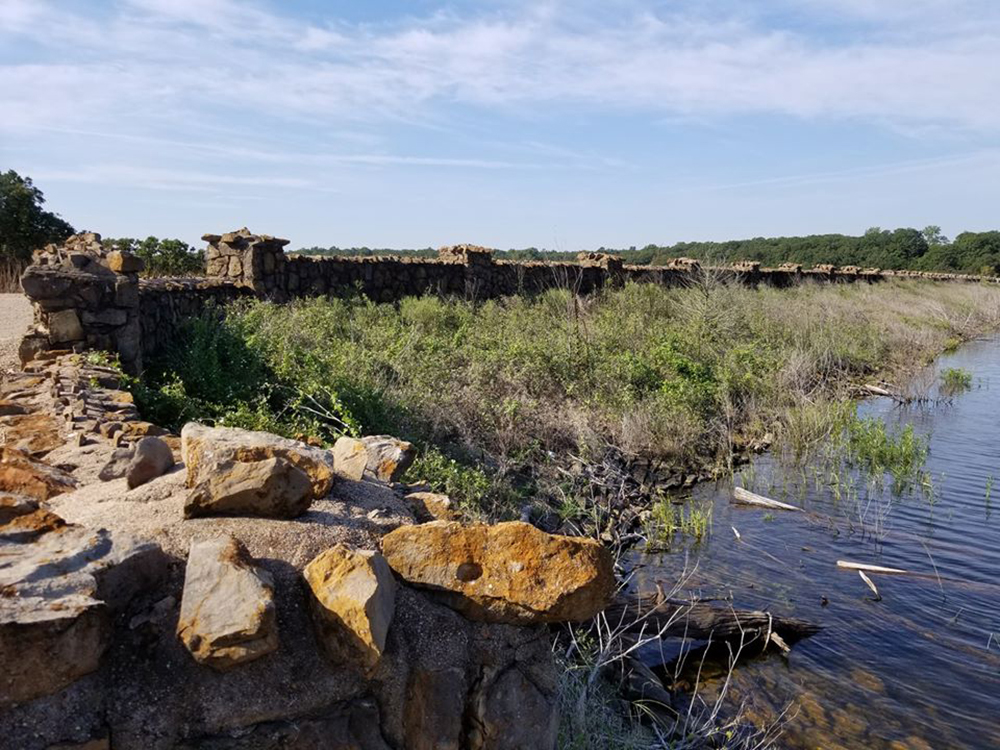 Fegan and the CCC: Trouble on Lake Fegan

A Woodson County lake's unique features are many, from its ornate sandstone pillars to the monuments to the workers who helped build it. Yet the imposing elements give a foreboding of trouble, even to those simply interested in sight-seeing.

No matter how many times I ford the low-water crossing near Lake Fegan dam, I hold my breath.

Doesn’t matter the water is only two inches deep, though it gurgles and babbles as it rolls over the concrete slab of road.

Perhaps that’s why I stopped just before the aforementioned spot on the pretense of snapping photos of the dam’s ornate sandstone pillars.

I was clicking away, looking for angles, when I saw someone approaching in the distance, who just happened to be the now-former Sheriff of Woodson County in a gunmetal gray truck.

Wayne Faulker was once a member of the Kansas Highway Patrol, and from his silver-gray buzzcut, looks like a military man as well — somewhat reminiscent of the infamous drill sergeant from the film “Full Metal Jacket.”

As William Least-Heat Moon points out in “Prairyerth,” it’s a familiar refrain to the outdoor writer-explorer, code for “Are YOU trouble?”

He mentioned my Virginia license plate, but didn’t seem to care much, especially after I mentioned my name, who I’m related to, and who he knows, along with rattling off a few historical details about the lake.

“This place was named after Ben Fegan, who owned this land in the ’30s.”

After awhile you get used to the test questions.

Striking up a conversation, Faulker seemed proud of the fact that he took presidential candidate Bob Dole on a 16-county tour of Kansas, though slightly miffed when I mention Dole’s adversary, former U.S. President Bill Clinton.

Faulker recalled being impressed by the courthouse at Cottonwood Falls in Chase County while on his tour with Dole, though doesn’t bite when I suggest the work of the Civilian Conservation Corps (CCC) that built Fegan in the 1930s — one of FDR’s “New Deal” programs — is a shining example of how large-scale government programs can be successful.

AFTERWARD, I was sitting just north of the dam at a decaying picnic table, trying to decide whether or not it felt comfortable out: one minute the cool breeze was pleasant, invigorating, but when it stopped and everything held breathlessly still, it became stifling.

That Sunday morning, the complexion of the water matched that of the sky, an almost identical blue separated by a band of pearl horizon and the olive-green of innumerable post oaks.

It hardly seemed possible the lake had been recently drained now that its waters had returned, which is a testament to how historical and environmental changes can occur suddenly yet seem as though “things were always this way.”

When it comes to places like Lake Fegan and its cobalt water turned to waves in the breeze, such relatively sudden transformation is benign; when one considers the “disappearance” of people and places due to atrocities, such haste is chilling.

Though I’d wanted to dwell upon dwelling there, pay close attention to the brown bell-shaped leaves that had begun to fall, I thought instead about the native peoples once living nearby along Sandy Creek, how they caught smallpox from whites and died in the thousands.

Many white settlers died, too.

Is it possible to open oneself to those sacred labels, dream them turning in the wind?

I MYSELF am still trying to discover what it is I’m endeavoring to open up by resettling here, what exactly it is for which I am on the hunt.

Despite having assembled detailed written and photographic maps of the county, I feel more lost than ever — like a blackjack leaf adrift atop the water.

An enormous raven’s black wings then sliced the sky, and once again I was reminded of the impending nature of death, how it circles us, slowly, gliding and swooping, breathing us in, trying to sense whether the moment is right.

In this, death is in league with the Great Mysterious: a partner, confidant or secret lover.

Walking to the water’s edge for a moment, I was reminded of my younger brother, how he haunts South Owl Lake, the “old” Yates Center Reservoir, for hours on end, fishing for crappie in an attempt to hold his mind in some sort of meditative equilibrium.

Being there, writing at Lake Fegan, I continued to search for mine.

The wind rattled through the oaks again, tousled the Johnson grass, toppled and redirected the tiny blue and yellow forest butterflies, yet did not inflate my lungs.

My breath was shallow, heart heavy and thoughts dark, despite the tranquil morning and the soothing song of crickets.

On June 15, 1933, the Toronto Republican reported, “The streets here were the scene of some celebration this noon when the word came through that all was well, and rightly there should have been for this project is a big one and one that has been worked for very hard by local men and sportsmen.”

Reading such sentiments about the lake is hard, as they exude a jovial mood which on that morning seemed completely alien, a stranger.

I had listened for the birds but heard only the whispers of trees.

Another article from 1933 mentions how between 12 and 15 thousand people visited Fegan on its opening weekend, and says “some mighty big fish stories” were told to accompany general “praise by fishermen” for the site.

Almost 90 years later, devoid of human activity, one could call Fegan a ghost-lake, where one can only imagine the cacophony of CCC building camps or the sparkling shouts of children.

Today Fegan stands as both a monument to a grander rural past even as it perhaps points to a more promising future — though it’s hard to imagine people today enthusiastically inviting in thousands of outsiders from regional building partners in Allen, Wilson, Neosho, Greenwood and Coffey Counties as was done in the 1930s.

When the wind gusted, an invigorating chill shot through me and I longed for it not to end.

To feel completely alive in this and other places, absorb their energy, undergo a resurrection of the spirit in some a-religious way, perhaps it is this for which I hunt.

I do not desire consuming the blood and marrow of some specific life, such as a bison or whitetailed deer or bobcat, but the tissue of life itself.

I long to quench myself on life’s own vital fluids, its sinews, build a home of its bones and clothes of its skin.

If only I can open myself to the strange glory I sense is on the cusp of penetrating me, perhaps then I might recognize this as my native sky and know I am finally home.