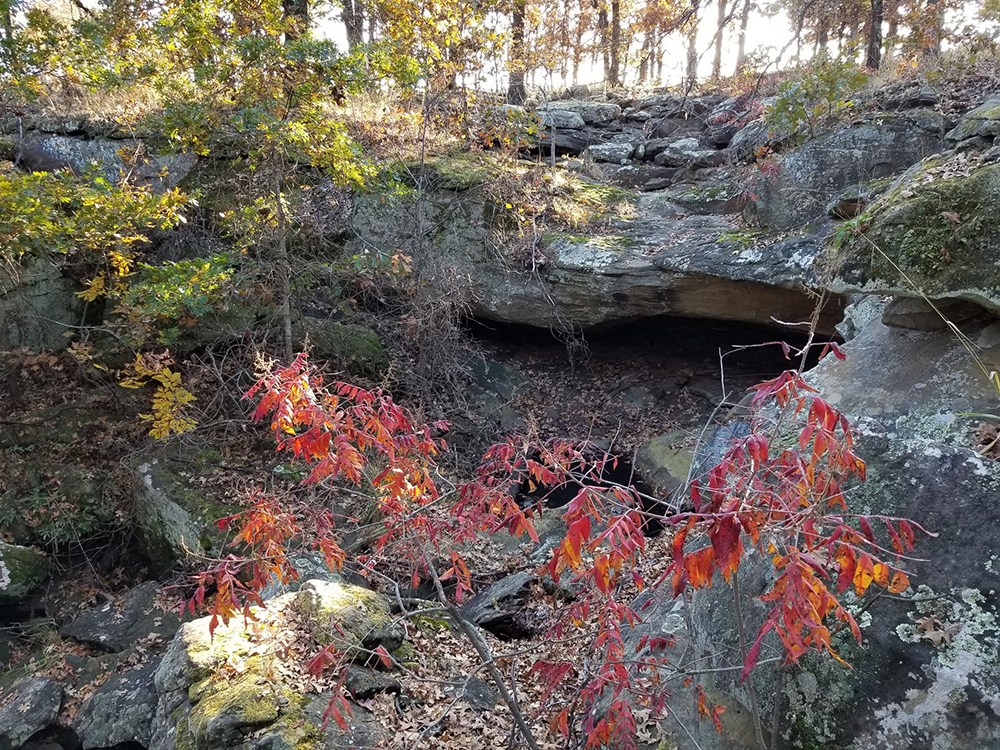 Images of Dry Creek Cave linger after a visit to the Woodson County site. A visit is almost a gateway into another world.

Long after I had crossed the Kimbell Ranch with its vast open sky, stretching and swelling with enormous oceanic depths, the experience stayed with me.

After I had seen the expanse of the Rhea Brush, and visited the graves of the Rhea family in Kalida cemetery, the feeling lingered.

For days afterward, even, every time I closed my eyes, the image of Dry Creek Cave pulled mercilessly at my thoughts, that geological black hole and singularity opening onto another space-time.

I would be miles away from that paleolithic gate near the northwestern corner of the county, yet I could feel it all the same: some primordial sense for that ancient Thing, that entrance into a disquieting zone before history as we know it began.

Yes, Robert Daly, Esq., stumbled across the cave in 1858 while on a hunting trip and recorded his findings shortly thereafter, and Alfred Andreas told the world of its existence in his 1883 tome “History of the State of Kansas.”

There is even an oblique sandstone memorial hidden nearby to the south, dedicated to a pioneer hunter-trader, that reads: “In Memory of James Jenne 1858.”

But this is “mere” history, when perhaps what we’re aiming for is mythology, metaphysics without mysticism yet with unquenchable mystery, a prehistory that perhaps only the earth itself can tell.

When Andreas wrote of the cave and its indigenous petroglyphs, for example, he interpreted the native writings on his own terms, seeing a man with a hat, a bird’s foot and a capital letter “A.”

Yet as I stood in the cave-mouth bathed in effervescent evening light a mere two months ago, I sensed that I was no longer in our present historical moment.

I felt the sandstone breakages tremble, their cleavages deepen, as the soil near me warmed, growing hotter and hotter as the campfires began to burn.

Not one fire. Not one flame in the darkening evening. But innumerable.

Not one face. Not one name that was sung within the folds of the coming pointillist starfield. But multitudes.

The portal had been opened, invited me into a place where the eons were stacked impossibly in layers like compressed translucent rock.

Something over and above me had offered up an irrefusable hospitality, invited me in, and in return, there was acceptance.

IN 1957, prior to the flooding of the Verdigris Valley that gave birth to Toronto Lake, James Howard, Ph.D., along with graduate students from the University of Kansas, set out to archaeologically survey the area.

On behalf of the Smithsonian Institution’s Bureau of American Ethnology, Howard and his team performed meticulous digs in 57 locations around the Toronto area, including traveling north to the cave or “rock shelter.”

What they found was no less than an entryway to another world, a stargate.

Howard christened the cave “Site 14WO224,” and expressed annoyance that white picnickers had effaced nearly all of its indiginous images with their own crudely scratched names and markings, though the remaining petroglyphs were nonetheless astonishing.

One was, he said, a horse with a line passing through its neck, which signified the equine creature was “emerging from the earth.”

But emerging from where?

Though as one stands in the mouth of the cave, sheltered from the plains-wind within the cradle of living stones, the uncanny answer is already sensed.

It seems the horse-figure is passing through the liquid surface of time itself, piercing and plunging into the present, not from any past one can readily imagine, but from a plane that shatters time’s very kingdom.

Another traveler from the void is a figure Howard claimed was akin to the supernatural Ojibwa entity known as “Little-Water-Man.”

Water-Man has managed to clamor his way a little downstream over the last millenia, though, so when I found him, he was so surprised that he yelped and flew away, dissolving into the creek-scene in a flash of steam, yet flinging blue-gray mud about like a fish dying breathlessly.

Unable to process what I had seen, I stumbled further down the waterway and collapsed into the crackling mud.

Plunging two fingers into the sacred paint — used to decorate the dead — I drew lines upon my own face, not with any knowledge of what they might mean, but to give myself over, drop deeper into the sounds and silences of the timber, the separation from this now-time marked with the signs of a life become all-too-familiar.

Everything that had ever happened in my past was released, every event, every memory, if only for a single grace-pregnant instant.

Night was falling as I left the cave, an enormous yellow moon rising over the dust-colored prairie.

I had communed with the Aksarben (1100 to 1500 CE) and Great Bend (1500 to 1700 CE) and countless other peoples, from immeasurable oscillating times, though I could not hope to understand what I had seen or heard.

The meaning interwoven in their words and clothes, jewelry and gestures, leapt from me even as it addressed me and bid me pay attention.

Such were the peoples who made southeastern Kansas a transitory home long before it was ever called by that name, and their ghosts devotedly linger.

As did their artifacts.

When Howard and his team performed their dig in the cave and surrounding areas, they excavated objects of startling colors, textures and styles.

A truly stunning archive accumulated across ages and generations.

Though I had the urge to dig myself, for some reason I refrained, perhaps so awe-struck by merely standing within the temporal rift that it seemed a gift enough.

I did, however, remove a single flat and rust-colored sandstone which now rests beside me on the desk as I write.

It reminds me that our time is short, our lives and cultures and beliefs and knowledge so infinitesimally shallow, that everything we ever are and were and will become is but one flitting instantaneous flash in the primordial depths of time.