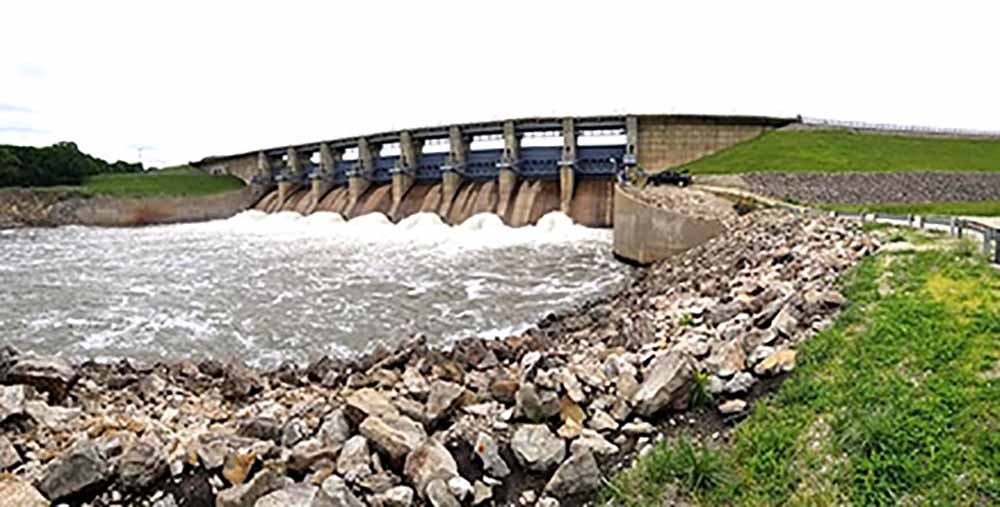 Dredging the lake for secrets

Toronto Lake obscures much of the Verdigris Valley, which was once home to ancient indigenous people. Early settlers looked down upon the Verdigris River on their way to make their fortune.

When it comes to rainy day getaways, Toronto Lake isn’t likely the first place that jumps to mind, but never underestimate the power of stir craziness.

An almost uniform veil of silvery-gray storm clouds had blanketed the sky, and I watched as sequences of small waves disappeared into rocky banks.

On the high hill behind me, the cemetery and other remnants of the Carlisle settlement, south of Toronto, dripped with newly fallen rain, not far from the ridge where Thomas R. Carlisle himself once lived.

Carlisle was born in the Blue Ridge Mountains of Kentucky in 1832, but set on seeking his fortunes farther west, he settled in the Verdigris Valley atop the aforementioned ridge in spring of 1857.

The view would have been significantly different at that time, as the lake and dam wouldn’t be constructed for another hundred years, and the Verdigris River still prominently snaked through the valley.

Indeed, it’s noteworthy just how much the lake water ultimately obscured, from swaths of Carlisle’s original claim, to other homesteads, railroad tracks and geological formations such as the Outlaw Rock Shelter.

One item that remains, however, is a hand dug well on Carlisle’s claim, which retired pharmacist Wes Koschke was kind enough to show me, along with sharing a hilarious story about his neighbor, Big John, whom he once mistook for Sasquatch.

Speaking of fairy tales, three years after Carlisle arrived, Daniel Beane, along with his wife Effie and sister-in-law Lucinda, arrived in the Verdigris Valley as well, setting up camp not far from Carlisle’s cabin.

One day, Lucinda was watering oxen along what is now Carlisle Creek when Thomas Carlisle himself happened to be watering horses.

Three weeks later they were married at Belmont, home of the Civil War fort several miles to the east, though during the war Carlisle and his neighbor Carey Mullinex were actually stationed at Fort Row near Coyville.

It was there, in 1862, that they witnessed Chief Opothelyahola and his band of several thousand Muskogee (along with other native people and slaves) die in the snow in untold numbers, after the aid they were promised by the Union was withheld.

The sky had begun to brighten somewhat when I moved up the road a bit, with just a hint of pastel blue creeping through the cloudbank.

In the distance, not terribly far across the water, sat Duck Island, so named given its particular shape, and to which I recently kayaked during warmer weather.

The island is unique for a number of reasons, one being that it was originally a high hill before the valley was flooded; and post-flooding, it possesses its own unique ecology, brimming with trees and grass and soil all adapting to the watery surrounds.

Around 1860, members of the Wilhite family built a cabin there, and about a half mile to the north, Smith “Smidty” Wilhite operated a rough-and-tumble tavern.

Smith, by the way, earned his name by fighting alongside Captain John Brown in his bloody campaign to end the horrors of slavery.

And John Walkup, who next bought the claim on the bluff for a mere $65, joined the Ninth Regiment in Humboldt to fight for the same cause.

While on the topic of noteworthy pioneers, across the valley to the north sat the claim belonging to the Carters, which today also borders the lake.

Stanley Curtis is a near-centenarian who lives at the site today, and vividly recalls his family battling the government when the lake project was originally proposed.

What’s wild is that the Carters are actually buried in the Curtises’ yard, though their shattered headstones have been moved around such that no one is exactly sure where.

Joshua Jasper Carter, whose stone is the only one legible, was born in Iowa, though died young of typhoid fever after deserting from the Union Army in 1863.

As for other noteworthy settlers, not far from Carter’s stone, Curtis also keeps what some claim is the chilling relic known as a “slave wheel” — a stone to which a slave was chained to prevent escape — providing evidence beyond the name “Negro Hollow” that, indeed, a group of freedmen established a colony to the northeast of what would later become the lake area.

Turning the clock back, not hundreds, but thousands of years, Duck Island and the Verdigris Valley hold even more secrets.

Thanks to 57 archeological digs performed throughout the area, just prior to creation of the lake, it was discovered that ancient indigenous people had been calling the valley home for millenia.

Perhaps the most exciting find comes from just north of Duck Island, at site 14WO203, where the Verdigris once linked up with Finger Creek.

In 1957, James Howard, Ph.D., along with graduate students from KU, determined that here once sat a village belonging to the Hopewell culture, which dates back to between 200 B.C.E. and 500 C.E.

That means there were native people inhabiting the area at least as far back as the days of Ancient Greece and the New Testament.

More specifically, Howard and his team unearthed pottery shards and flint tools, projectile points, scrappers, blades, drills, and more, which is why Toronto Point’s other name is Clovis Point, a pun that refers to a specific form of ancient tool.

Also found were trace minerals left behind by body paints, and from the specific chemicals found, it seems the Hopewells favored white and yellow, though they were likely delimited by what natural sources of pigmentation existed.

As the rain picked up again and tore through the still-bare blackjack trees, I dreamed them there, tending to children along with modest rows of corn and squash.

Speaking in a language unknown to any living person, they coordinated building some of the most intriguing “earth mound” structures ever found in the Americas (and of which traces still exist in Greenwood County).

Some of these mounds took on the shapes of birds, snakes and other living creatures, though it is still largely unknown what precisely their purpose was.

As only a few mounds were used for burial, the most fascinating hypothesis is that, somewhat like Stonehenge, they played a role in early astronomical observation or perhaps religious veneration of celestial objects like the sun and moon.

As for the demise of the Hopewells, no one is entirely sure, but some educated guesses include tribal warfare, natural climate changes, overhunting and the development of full-scale agricultural societies.

However, if you listen closely to the wind and water of Toronto Lake, one can still hear the whisper of a thousand murmuring ghosts.