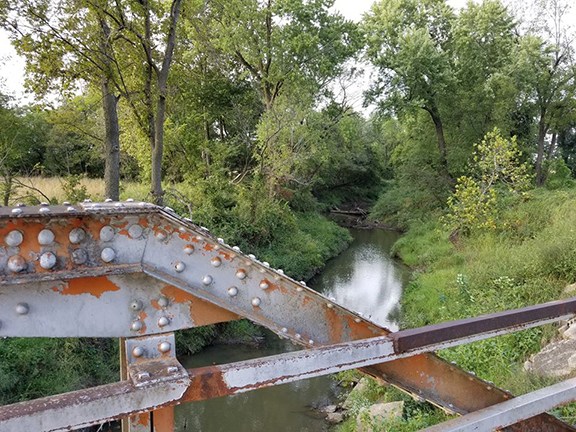 Defiance: the defiance of Lomando Pierce

A look at Woodson County's lesser known third county seat, Defiance, and the tale of Lomando Pierce, who operated a county store along the Santa Fe Railway between Neosho Falls and Yates Center.

The first time I met Theresa McNett she said, “I have had spirits following me my whole life.” Looking back now, I recognize the ambiguity of the statement and realize she might have been referring to either one of us.

Indeed, I’d discovered Theresa while looking for a ghost, then eventually went searching for one with her. I initially knocked on her door while trying to find the abandoned townsite of Defiance, the seat of Woodson County in 1874.

Back then people were looking to start a town closer to the center of the county, and so folks in the south Owl Creek area decided to get in on the action, challenging Kalida’s claim to the seat of government.

Defiance-backers even went as far as to deliver whiskey-laced beer to a political convention in Kalida, the 1873 county seat, which they managed to reduce to a drunken revel.

When they eventually won the county seat election, the parade containing 4,000 people stretched out for over a mile, and those Fourth of July festivities must have been raucous.

Perhaps that’s why the Civil War soldier on horseback who Theresa claims haunts her barn continues to come around. He’s seen too much of war and would prefer instead to remember the bottom of a bottle.

After grabbing power — very likely through a rigged election — the town of Defiance began to take shape thanks to lumber hauled in from Humboldt. Along with the hotels, tavern and more was the original Woodson County courthouse that was later moved to the northeast corner of the Yates Center town square.

Other than some dry railroad disputes, the only trial I’ve ever found records of involved a man named Kluckhuhn, who struck his wife for speaking tongues in church. He was fined $5, and the couple eventually reunited.

Theresa had shaken me from my random historical recollections by reminding me that the trees in her yard are very much still alive and present, and that if you know what to do, it’s possible to feel their heartbeats.

Being one of the “oak people,” as she put it, she instructed me to hold my hands over the tree bark without touching it.

“Focus on the sky and the earth below you,” she intoned. “Clear your mind, then clap to get the energy going.”

Standing with eyes closed, I waited, listening to the cicadas whir.

The autumn wind blew across the silent earth. Insects sang before the setting sun. And in that moment I recall wanting to feel that tree’s heartbeat, to leave skepticism by the gravel roadside and have a moment of spiritual awakening in the company of this medicine-woman who’d been “touched by the water-gods.”

“You only went to the shaman if you had a special need,” she explained. If only she knew how profound a need it is…

But there at the site of Defiance, the life of that tree withheld itself from me. Recalcitrant.

Theresa’s two red racing mules, Ruby and Lyndola, must have been watching the whole scene with curiosity.

I wonder how stubborn they are. Though they left us alone as we tromped through the golden-yellow prairie grass, looking for any remnant of building foundations.

The moon then began to rise along the horizon, a rounded plane of ageless light. Perhaps it was watching, too.

THE SECOND time I met up with Theresa, we visited the grave of someone I had previously searched for and failed to find: Lomando Pierce.

Born in 1852, Pierce had operated a little country grocery along the Santa Fe Railway between Neosho Falls and Yates Center, near the forested banks of Cherry Creek. In 1895, he named the post office there in his own honor, “Lomando.”

At the time, between 200-300 carloads of hay were shipped out of the Lomando siding per year. Today, all that remains are an iron “pony” bridge, an overturned car, and the store’s concrete foundation.

I also found a spotted antique bowl eaten away by rust, which I pugnaciously clung to despite it encumbering me. I had to come away with something tangible and refused to give it up.

All I’d really wanted was a photograph of the grave. So simple. But isn’t this very search an image for life, or at least the life of a writer or artist? One fights and fights, knowing there is a grave at the end of the journey — but if one can only make a record of life first, leave it behind, maybe the struggle will have felt worth it.

I had angrily called out in the woods that day, demanding Lomando reveal himself. From where, though, has this haunting desire come from? Why become a keeper of the dead?

Theresa informed me previously that she’d used intuition to find the burial place of her great-grandmother in Iola’s Highland Cemetery — “I was being pulled toward them,” she’d said — so perhaps she’d be successful in this venture as well.

That, and she and her partner Jim Weseloh had both been there before.

Surely this approach would be more successful than climbing a deer stand 25 feet in the air and surveying the timber.

Jim drove the four-wheeler through the brambles and briars, narrating, while we held on for dear life, feet dangling over the back, jeans collecting prickly stick-tights.

After coming to a halt, Theresa and I jumped off and started wading through the tangle of undergrowth. She repeatedly fell and laughed uproariously as I helped her to her feet.

“That’s a water tree,” she said, pointing to a branch that had been snapped and bent so that it pointed at the earth.

She claimed native people had marked underground water sources in this way, and later became adamant that Columbus Day be renamed in honor of indigenous peoples. She herself has both Cherokee and Choctaw ancestors.

As we arrived at the grave, I was astonished how close I’d been to it before without realizing it.

The marble shrine bearing Lomando Pierce’s name seemed to glow with an interplay of shadows and eerie light, a brightness in sharp contrast to the silver-blue melancholy of the forest scene.

One need not be an empath like Theresa to feel it: the heavy sorrow of the place, the unnameable melancholy that lingers and resonates like a cloud, especially when one knows more of the story.

Following Pierce’s death in 1907, along with his son Frank’s shortly after, Lomando’s wife Addah was consumed with desolate and inconsolable grief.

When the train no longer automatically paused at the rail siding, the custom was to flag the engineer if a stop was required to pick up passengers or goods.

One day, Addah stepped onto the tracks and flagged the train. But rather than step back again, in a moment of tragic resolve she was seized by the urge to end her life.

Standing frozen along the tracks, she remained until the engine struck and killed her, shattering her bones like glass.

It is a moment that seems carved out in space, an event whose timeless gravity is amplified and given form by the absence of dates on Lomando Pierce’s headstone.

“I see two children playing along the water,” Theresa whispered. “I hear her calling to them.”

Even now, as she stood silently near the creek bed with its damp broken sandstones, I can still see tears in her eyes.