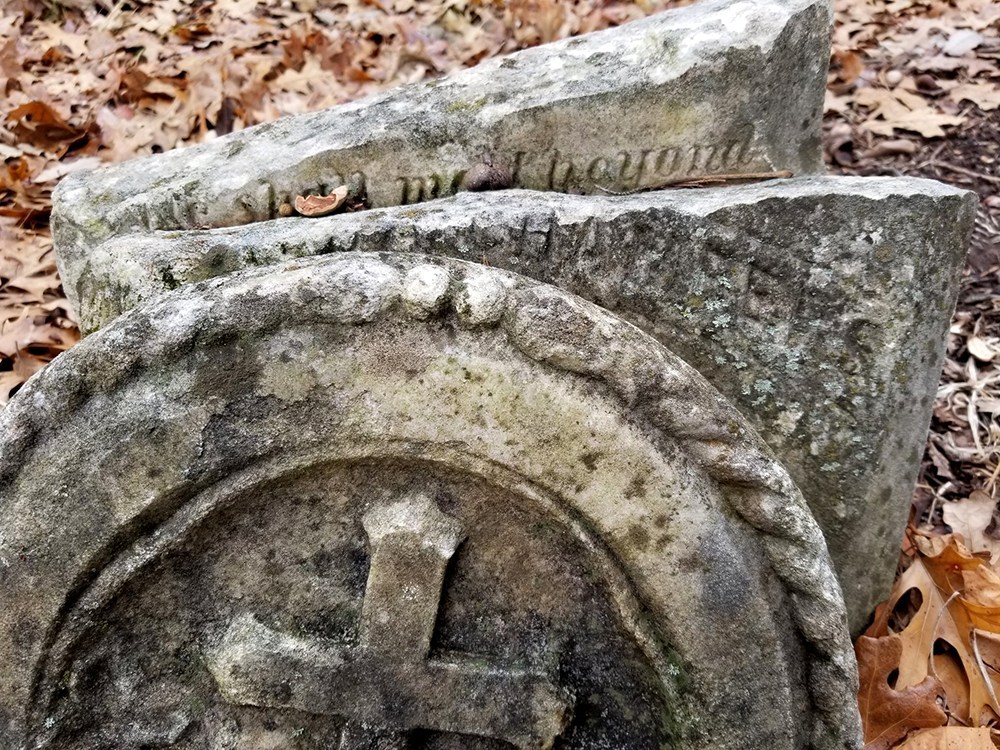 As night falls in Cottage Grove cemetery, that’s when the screams begin.

Old settlers used to claim there were panthers in the woods nearby, enormous cats with claws and fangs that move on deathly silent paws.

When children heard their terrorizing calls, they swore it had to be someone condemned to hell, begging for a merciful end.

As I walked the path to the cemetery entrance an icy wind sliced through me like blades. I swore I, too, heard voices and that every echoing step through the cold might be my last.

Despite the irony of dying in a cemetery, at least my final remains wouldn’t have far to travel.

BEFORE being called Cottage Grove, the cemetery was named Oak Grove, and before that, the Phillips family graveyard.

Its hauntingly moving aesthetic is immediately apparent upon approach, as are the impressive boulders that wrap around the site — which “Tales of Early Allen County” describes as being akin to “a protecting arm.”

Despite innumerable times the hungry waters of the Neosho have crawled from their banks, intent on consuming this elegant city of the dead, the barrier has nonetheless held fast, clothed in its ancient armor.

In winter, the enormous limestone blocks were draped in long, white icicles trailing to the ground, dripping slowly, slowly, eating away at the structure, meticulously shaping them, as has happened for countless millennia.

If the cemetery stands as a series of monuments to the lives of the human dead, to what, pray, do these strange and magnificent markers pay homage?

I imagine the Osage and other tribes had a story or two about these sacred forms, perhaps how they made the birth of a people possible, or marked the site of an epic primordial confrontation.

For as Suquamash/Duamish Chief Seattle once explained: “Every part of this soil is sacred in the estimation of my people. Every hillside, every valley, every plain and grove, has been hallowed by some sad or happy event in days long vanished.”

AS IS only fitting, the tale of how Cottage Grove cemetery came into existence involves an inconceivable local tragedy.

Dr. Isaac Phillips and his partner Elizabeth Holmes were staking out a claim in the area during the initial white settlement of the county, when just before Christmas 1859, their beloved daughter Maranda met a horrific end when she was only 9 years old.

An entry written for the Iola Register in 1931 by Lucretia Campbell outlines the event as follows:

“In 18[59] the Christmas holiday preparations were quickly turned to sorrow by the tragic death of the neighborhood doctor’s little girl.”

“She was helping her mother stir a large kettle of pumpkin butter over an outdoor fire when her dress was caught by the flames, and before they could be extinguished she was badly burned.”

“Neighbors and friends prepared the crude casket and dug the little grave in the southwest corner of the doctor’s homestead.”

“Later, when patients and friends were cut down by the Grim Reaper they too found a resting place in this same plot of ground, now donated by the doctor for a public graveyard.”

Campbell’s account is nothing less than transformative for the scene of Cottage Grove.

I was no longer simply enduring the bitter cold on a winter’s day near Christmas in a frigid, desolate graveyard.

I was standing near Dr. Phillips’ home, and instead of the screams of predatory cats, I trembled at the piercing wails of a young girl.

And as I knelt in the dry and crumbling leaves to touch the cold stone of her grave, I dreamed being surrounded not by a cemetery inscribed with misquotations from the Bible and Shakespeare, but sorrowful neighbors torn apart by grief.

NOT surprisingly, the death of his daughter took a seismic toll on Dr. Phillips, devastating his psyche in gruesome ways.

Legend has it that one night a corpse was secretly delivered to the good doctor for “medical research,” and only an empty casket was buried thereafter.

What Frankenstein-like experiments he might have had in mind, one shudders to guess.

In another version of the story, a body was being delivered to the cemetery on a lumber wagon, when something menacing in the darkness terrified the horses so badly that they ran, smashing the wagon across the rocks and throwing the corpse into the yawning and ravenous night.

Either way, one of the coffins buried in Cottage Grove is reportedly empty, and the body of the dead, long missing.

AS IF disappearing corpses weren’t enough, Cottage Grove arguably boasted its own “woods witch” of sorts, the one and only fiery suffragette, Lucretia Campbell.

Campbell’s life story could supply ample material for an entire autobiography, but her connection to the cemetery alone is fascinating.

Just across the Neosho was the homestead of Campbell’s father, William, where he had constructed a log cabin in 1855.

When efforts failed to convert the original homestead into a state park and the cabin was in danger of being demolished, Lucretia herself dismantled it piece by piece and rebuilt it on the cemetery grounds, veneered with slab logs, chinked cracks and furnished with antiques.

Her “pioneer museum” was born, and she lived out the remainder of her life there, determined to preserve the relics of a bygone era.

Campbell even is reported to have set out a perpetual “dining room” akin to that of Miss Havasham in Charles Dickens’ “Great Expectations,” where the furnishings were allowed to collect and rot in a kind of artistic exploration of ruin.

All that remains today of Campbell’s efforts are some of the stones from the cabin’s fireplace, but as I stood over them, I could nevertheless feel the revenant of their ghostly warmth and breathe the wispy smoke they slowly emitted.

Though Lucretia is buried not far away along with her father, it seemed as though those fireplace stones were just as true a memorial, a fitting monument to someone who seems to have longed to defy the passage of time.

For like Isaac Phillips’ anguish at the loss of his daughter, or Campbell’s own pain at the loss of her father and childhood home, the words of Miss Havisham still resonate in spectral refrain:

“The broken heart. You think you will die, but you just keep living.”

“Day after day after terrible day.”