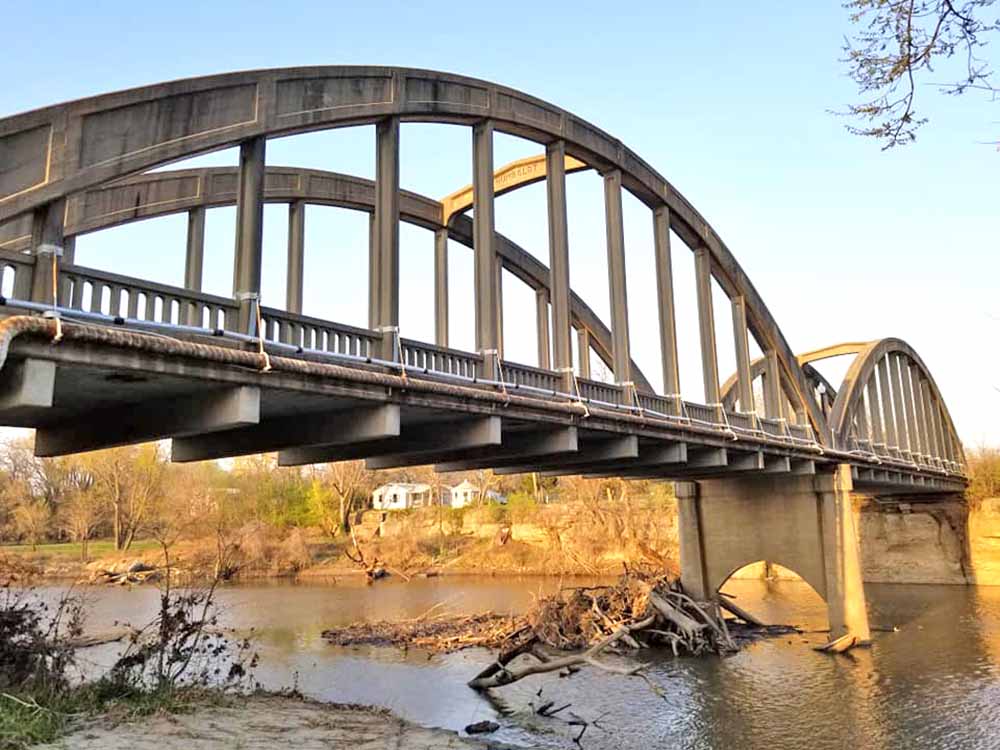 Crossing bridges to the past

A bridge is a symbol for so many things, so many passages and crossings in life.

We stand upon one shore, wondering if we have the means or courage to brave the distance, decide whether or not we will trust what might support us.

Standing on the west bank of the Neosho River in Humboldt, I wondered if the water had receded enough that I could cross on foot.

The speed of the dark current across the dam, however, was enough to give me pause, imagining myself swept downstream by the fluid rush.

Of course, for years, wading or fording were the only methods available for trekking across the span, often followed by a dripping climb up bright limestone bluffs lining the opposite shore.

From my specific vantage, I scanned for any remains of the Thurston Ford, which stretched diagonally across the water not far from the current bridge.

It was there I saw the ghost of Eleanor Gibbs, who in 1870 managed to ride her horse from one side to the other, racing against a deadly floodtide.

Only a few years before, Col. Orlin Thurston and his friend Capt. Dr. George Miller, had used two unassuming sandstone buildings on the shore nearby to help runaway slaves find their way north to freedom along the Underground Railroad.

Before any bridges were built, a couple different ferry services served to aid with crossing, though they came with fees ranging from a nickel to 35 cents, depending upon whether one was transporting humans, livestock or buggies.

I must admit I smile at the thought of a nineteenth-century farmer loading up a single hog and using the raft to cross his or her main barrier to town.

Charles Lander provided an account wherein he recalled using a self-drawn ferry pulled hand over hand. Its path reached from the west end of the current bridge to about as far north as one can get before the river’s course cuts back west.

Despite the potential benefit to the community, though, when the county first voted whether or not to build a bridge spanning the Neosho in Humboldt, the measure was actually soundly defeated (29 – 377).

Seems times haven’t changed much, as I guess hardly anybody thought they should support something they believed would only help other people.

Ultimately, it wouldn’t matter. With the prospect of the railroad coming through, a private stock company decided to support the first bridge anyway, paying a “mere” $2,000 to the King Bridge Company out of Ohio.

When the first bridge was finished in September 1870, it was actually a toll bridge that would cost you a nickel or dime, and when the toll house was eventually demolished, a remarkable trove of coins was discovered that you can view at the Humboldt museum.

The tolls indirectly led to tragedy as well, as one year around Christmastime, a woman named J.A. Nichols and a young girl in her charge drowned while attempting to avoid incurring a 70-cent fee. Apparently, their wagon box separated from the frame, and soon the icy cold current had filled their lungs.

After a series of accidents and political battles, the tolls were eventually dropped and the first bridge was opened to the public in 1878.

It would operate for another 55 years.

After finally crossing the river, I had to swing in and stop at the site of O’Brian’s Mill, which is marked by an impressive limestone memorial.

O’Brian also had a sawmill a couple miles north of Humboldt, but it was the two-burr gristmill designed for grinding grain that Confederate troops torched during the Civil War.

The guerillas sacked the fledgling town for the second time on Oct. 14, 1861, and having been caught by surprise, the 20 or so Union men who attempted to regroup at the mill were ultimately captured (though survived).

Indeed, I dreamed them there, listening to the rush of water, outnumbered and afraid, as they watched the town’s primary method of subsistence becoming ashes in the fragile evening light.

After the war ended, the mill was eventually rebuilt, and by 1875, both a stone river dam and the Humboldt Water Mills were officially in action.

Many remnants from the bridges and mills can still be found today, especially since the last mill wasn’t dismantled until 1948.

In fact, veteran reporter Bob Johnson showed me several places where, following a series of rusted stairways, one can “safely” reach the water’s edge to make a closer inspection of period foundations and masonry.

In 1871, Charles Lander, who we earlier mentioned crossing the river using a hand over hand ferry, started his carriage manufacturing shop just east of the mill at the corner of what is now Fourth and Bridge Streets.

It’s incredible how well-preserved the building is, with its weathered limestone facade and myriad metal-framed windows and doors.

Landers’ first structure, however, was actually a little frame building on the site.

As sorts of things were manufactured at the carriage shop over the years, including wagon parts and bicycles, along with various blacksmithing tasks.

Perhaps best of all, is that a family of artisans now owns the shop once again, father-son craftsmen Patrick and Collin Haire, who work wood and blow glass, respectively.

It was almost time to head out for the evening, but I couldn’t leave before returning to take a closer look at the present Marsh Arch Bridge.

The historical marvel almost met its end when a proposal for a new bridge popped up, but quite a few folks from the community stepped in to save it.

A similar style bridge spanning the Neosho in Iola was not so lucky.

Constructed in 1932, in the midst of the Great Depression, it had been brought into being after the old bridge had been deemed unsafe.

Many in the community have family members who worked on those concrete rainbows, such as Bob Johnson’s grandfather, Sherman Oliphant, who accepted pennies for the work because times were more than tough.

As the light faded and a yellow sun blended with fields of gleaming purple dead-nettle, I dreamed them there, toiling still after almost a century.

Their brows dripped with sweat as they swung hammers into rocks and hauled wheelbarrows brimming with earth.

They were building a crossing, yes, but they were also trying to bridge their way from that place to somewhere perhaps far, far away, free from the injustices of poverty and the silent resentiment of exploitation.