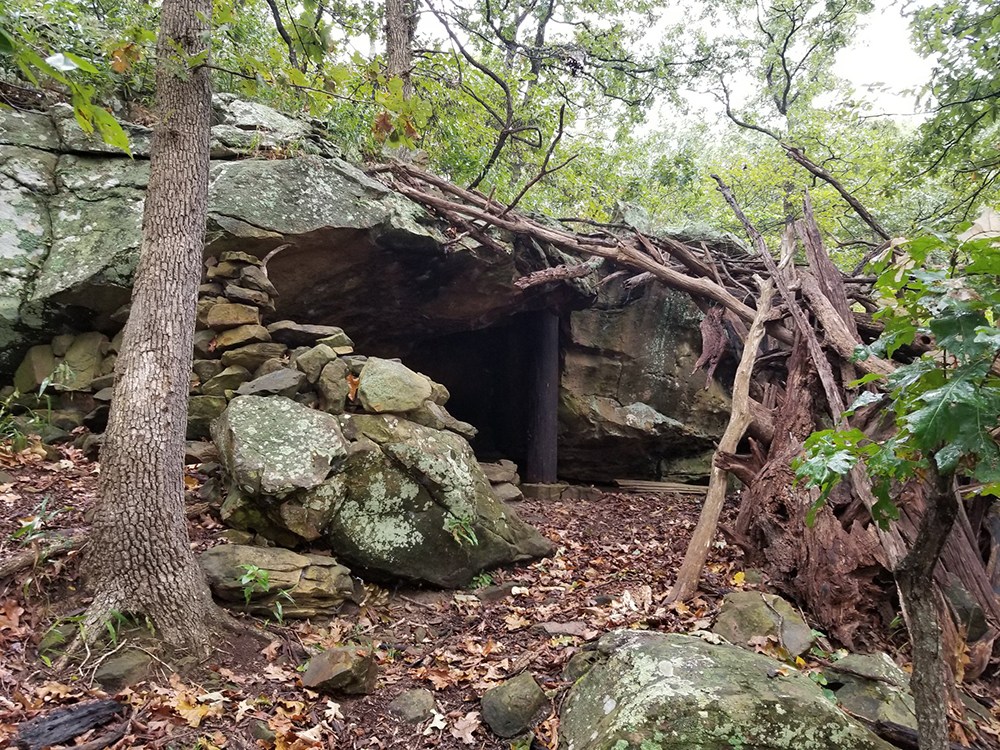 A trip to Cross Timbers State Park offers an opportunity to be alone with your thoughts, even if you're surrounded by much more than you realize.

No sooner had I descended the sandstone staircase leading to the ancient tree trail at Cross Timbers State Park near Toronto Point, than a white-tailed doe erupted from the undergrowth and set to crashing through the forest.

Like the name implies — though no one is for sure — this is a place of crossing-through.

I watched as she explosively kicked her hind legs and bright tail into the air, not weightlessly, but as if she’d been catapulted via some sort of natural machine.

It was my first signal to stop and take in the surroundings, rigorously hesitate and study the forest now engulfing me on all sides.

One could learn the name and nature of one thing a day, and barely finish in a lifetime.

First on my list were two of the deciduous standouts on this arboreal island in the Chautauqua Hills, as it stretches north from Texas through Oklahoma: the post oak (Quercus stellata) and the blackjack oak (Quercus marilandica).

You can tell them apart by their leaves.

Post oaks and blackjacks both grow acorns, which in turn are eaten by deer and turkeys, but post oaks reproduce more quickly, in their first summer, as opposed to blackjacks which need about 18 months to mature.

Both are also pretty hardy, “tough but ugly,” as one saying goes — evinced by their scaly, armored bark — and they can grow in poor, dry soil where few other plants can survive.

In 1982, scientists from the Tree-ring Laboratory at the University of Arkansas drilled samples from several tree trunks near the Toronto Lake area and determined them to date anywhere from 1727 to 1863.

This means that the youngest tree sampled was born during the Civil War, and the most senior was more than 50 years older than the United States itself.

AFTER taking a seat beneath the large sandstone outcropping that had been converted into a shelter, I watched a spider frantically kicking her legs as she spun.

Over and over she turned, weaving, as if threading time itself, such that the afternoon forest shuddered in stillness around her.

The lapping of the waves on Toronto Lake at the base of the hill intertwined with bird calls and wind and amorous insects.

I studied the post oak leaf I had plucked from a nearby tree, and held it up to the light so as to discern the individual veins and cells.

I tried to make out the names carved all around me in the fallen tree trunks and stones.

Apparently capital letters are best when making one’s mark, when leaving behind a memorial.

Other creatures had resorted to less obviously symbolic means when they’d sojourned there, such as the birds with their white ink.

The rock overhead was combed with shapes formed by wasps or hornets, and racoon tracks littered the dirt floor.

Today, only wildcats and white-tails remain.

At that moment, while contemplating marks, I became acutely aware of the franticness by which I was making my own.

Slashing and tearing at the scene all around me, I had become like some Spanish conquistador rending the woods to ribbons with my sword.

And as though such violence had become too much for the world to bear, the clouds overhead parted and produced a glare so bright I could no longer type.

Shifting angrily back and forth I continued writing, for some reason resisting the calming light as it bathed the scene in ghostly yellow.

Then the wind kicked up, shoving through the timber so as to silence every voice but those of the frogs.

I had encountered some hikers from near Wichita (Mulvane) on the path, and though I’d passed them, they eventually caught up with me, along with a bushy white dog that no one seemed to claim.

We chatted about what most folks do: the weather, more specifically, how much rain had fallen in the area last summer, and how now the banks of Toronto Lake are strewn with tangles of ivory-smooth debris.

As they parted I looked south, and the sky shifted as if it had designed to rain at that very moment, making me recall how the first time I’d walked the tree trail it had let go and poured.

That day, I’d stomped triumphantly through the trees, slipping on nearly every rock, yet basking in the absolute gloriousness of it all.

I was soaked to the bone and never felt more alive.

Despite feeling empty — I had been plagued with a sorrowful hollowness of late, perhaps an uncustomary peacefulness — I searched my thoughts to find the meaning of the place and returned with a reflection upon age and perception.

The trees in that forest are old, wizened, full of wisdom and stories, even as many of the oldest have fallen long ago.

What do they know that we don’t, having lived multiple human lifetimes?

An uncanny thought then leapt up: what if hollow emptiness is precisely their domain of expertise? And that in becoming quiet inside I had become more treelike?

In this place so much identified with the Old West, had I stumbled upon a very “Eastern” insight: namely, that there is wisdom in nothingness?

Indeed, when “Legend of Sleepy Hollow” writer Washington Irving passed through the Cross Timbers, he wrote of “weary days toiling” through forests he named “dismal,” wherein he said he would “not easily forget the moral toil, and the vexations of flesh and spirit” faced there, akin to “struggling through forests of cast iron.”

What else was I to do, then, but indulgently embrace such cold, dismal vexations?

So I closed my eyes and imagined being a tree, foolishly attempting to inhabit its consciousness.

No sight nor sound, though perhaps a certain tasting or smelling of sorts.

An imbibing of air and soil, like the transfiguration of Daphne in Greek myth.

Along with a strange sort of feeling — slow, imperceptible — as the wind blew and the sun withdrew and the rain began to fall in large intermittent pearls.

It began to drip from the overhang to the south as the sunfire blazed brighter.

Maybe she’d been right, the priestess-“seer” at Defiance: perhaps a tree does have a heartbeat, though with a pulse that’s glacial in its passage, making it seem absent.

Perhaps an almost eerie calm is necessary to sense the life that hides in so many things that surround us, yet to which we are blind.

When we are so often in the midst of a crowd, yet believe ourselves alone.