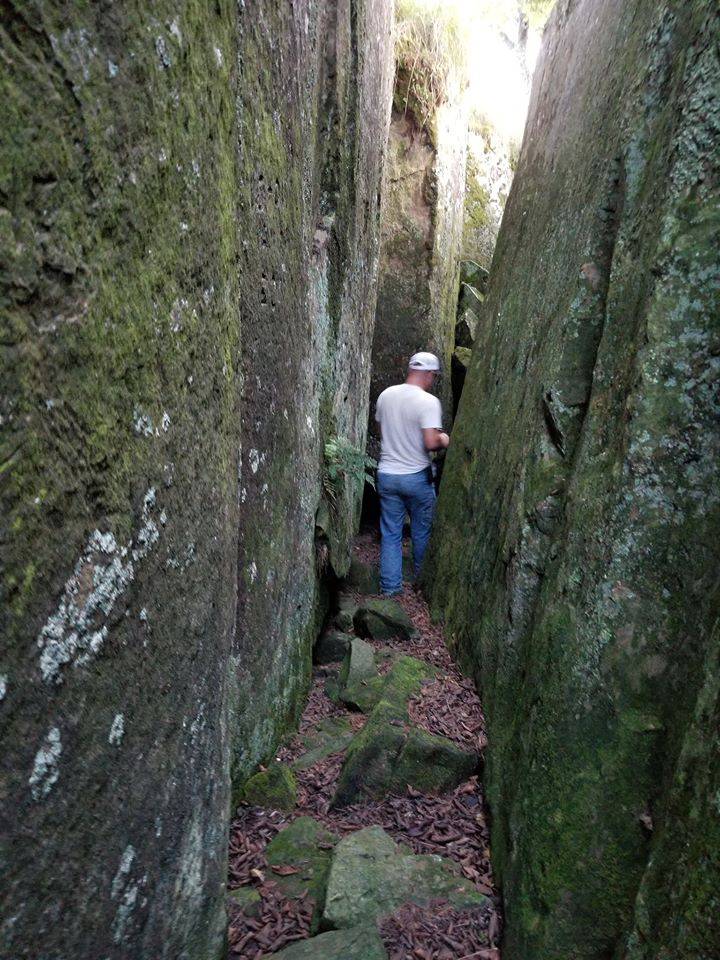 Cave serves as a source for local legends in Woodson County

A heart of stone. Cold, unopened and unbending. Weary. Battered by the elements but unbroken.

About seven miles northwest of Yates Center, hidden in a pasture, is the natural geological formation known as Cooper’s Cave. Made of native sandstone, and carved by water and time, its series of boulders huddle together like enormous ancient beings that have solidified and become one with the prairie over the course of millennia.

The cave gets its name from a fellow by the name of William Cooper, who ranched this land along Owl Creek back in the 1870s. What many titles the indigenous people who lived here over the course of centuries had given it before, one can only imagine.

Not long ago, I visited the cave with its present steward, Nick Barney, who today, does a little bit of everything: cattle, hay, alfalfa, corn and beans. He mentioned that sometimes he and his dad grow wheat, but that in the last few years there hasn’t been any money in it.

Nick is also Chief of the Yates Center Volunteer Fire Department, though given the extensive time required to do so, he’s not bashful about saying he’d gratefully pass the torch. Nowadays, they mostly handle grass fires, he said.

We pulled up to the cave as his blue truck sputters to a halt, joking about how drinking in middle-age is a risky venture, where only a beer or two can bring about a surprising bit of pain and suffering.

Alerted to our presence, black angus cattle hurriedly cross the pasture, hoping for something extra to eat. As our feet shuffle through the dry grass, they call out in the distance: Muuurrrr! Muuurrrrrer!!

Approaching the open-air “entrance” to the cave area, the first stones along the rough path are imposing, some reaching as high as 20 or 25 feet tall. We navigate through them like a labyrinth, waiting to be tested by some monster like the minotaur.

Immediately the carvings in the rocks became apparent, the dates reaching back to the founding of Woodson County in some places. “Everywhere you look, there’s stuff carved in it,” Nick pointed out in his accentuated midwestern drawl.

For years, this was also a favorite picnicking spot. An entry from the Yates Center News in 1896 reads: “Wednesday about 30 young people drove out to Cooper’s Cave. They were taken by T.L. Reid[, proprietor of the Hotel Woodson,] in his picnic wagon drawn by four horses.”

Later, Nick showed me the place where the wagon trail led from Yates Center to the cave. We watched as the lights above the little town glowed red in the distance as night came creeping on. Everything became still, as the yellow sky burned to the point of extinction and the once-buzzing cicadas fell silent.

Pointing to the moss that half-covers many of the names and dates, Nick said “one of these days we’re going to bring a bunch of brushes.” I then spotted the signature of one of my ancestors, Bob

Cook, cut deeply in a nearby surface. Below his inscription are the words “Yates Center Kans.,” and he’s enclosed everything with a rectangle drawn in the shape of the state.

We turned around and peered down at the entrance to the cave proper, a triangular opening only a few feet across that guards a passage between it and the cave’s true interior. Though difficult, it’s possible to duck through this way, but we went around the back instead, moving along a narrow stone corridor.

As we began shining lights into the damp darkness of the water-filled cave, a slit in the stone only a few feet high, I’m reminded of another Cook, my 3-greats grandfather Henry, the first white person to discover the cave while on a hunting trip. Henry had lived near the cave, his homestead only about a mile to the east.

Unfortunately, his visit was not so pleasant as ours.

Legend has it, that when Henry leaned down to enter the cave, a mother bobcat had previously built a den for her cubs there. Not surprisingly, she didn’t take to kindly to the young man’s intrusion, and mauled him for his trouble. Though he had his single-shot buffalo gun, it was too cramped between all the rocks to take aim, and so Henry ended up with a series of nasty scars on his neck that he wore for the rest of his life.

As Yates Center’s mascot is the Wildcats, I’d like to think that Henry Cook’s encounter with the mother bobcat was inspiration behind the image.

Great-grandpa apparently didn’t learn his lesson, though, as on another occasion he was hunting near the cave when he wounded an elk. Rather than killing the magisterial creature, he only made it angry, and so was forced to take cover in a nearby ditch as the elk ferociously thrashed the earth with its antlers.

A Union veteran., Henry A. Cook died when he was only 30 years old, buried in a hidden cemetery north of Yates Center, two years before the town existed.

Exiting the cave, Nick and I passed through the triangular passage from the inside out, our shoulders barely fitting as we scraped the edges. We wandered through the boulders surrounding us on all sides, new names leaping out to remind us of all those who’ve come before.

Nick led me up onto the top of the cave area.We were able to peer down on the massive structure from above. The soft native blue sky was pastel and cut by wisps of thin clouds. Up here, there’s room to run.

Which is exactly what a brave fellow by the name of Dick Gatling once did.

When atop the cave structure, it’s possible to walk around a fissure between two of the main stones, which are nearly 15 feet apart and reach about 20 feet to the floor below.

An incredible rider and trainer of horses, who carried a blacksnake whip rather than a gun, one day Gatling decided he was going to jump the gap.

One can imagine the anxious anticipation as he rode back into the field for a running start. Whispering words of encouragement to his mount and perhaps uttering a little prayer for himself, he charged through the bluestem toward the gap with hooves pounding the earth.

The tale is told that for many years after this unbelievable leap, it was possible to see the marks where Gatling’s horse successfully landed on the other side.

As Nick and I paused near the exit to the cave area, the cicadas begin to chat as we do: Errreee…errreee…errreee.

He talked to me about his brothers, about local history and what it’s like to own a part of it. He seems proud of the cave, and delights in showing it to people, which is noteworthy as so many pieces of our heritage have become lost, obliterated or closed off.

“No trespassing” signs stare one in the face at historical site after historical site. At some, even after obtaining permission, one still worries about getting shot.

That said, most folks are hospitable and eager to show you what they have. Like Nick, they’re excited that someone else is interested and that they care. “You could always lock the gate,” he said, “but that just keeps honest people out.”

What might it mean, then, in terms of sustaining our local history and our culture, for each of us to open our own gates?