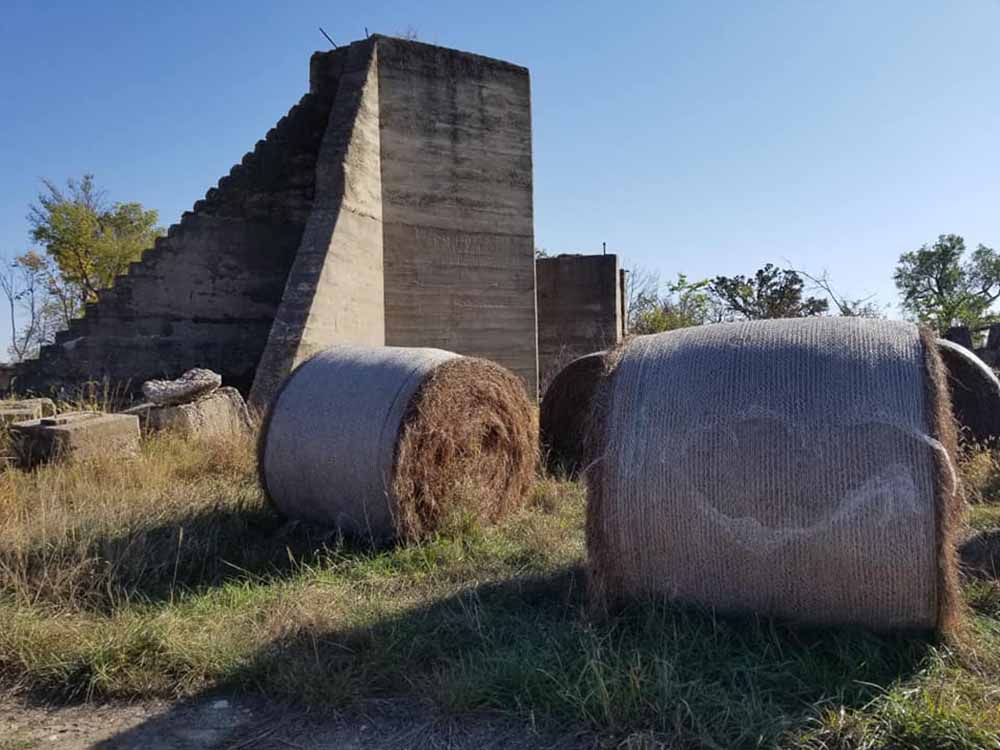 Concreto: the abstract and the concrete

Ruins of an abandoned cement plant north of Gas City evoke comparisons to ancient temples. Was there something about concrete and Concreto that was intensely philosophical?

The German philosopher G.W.F. Hegel once quipped that, contrary to popular opinion, the most concrete things in the world are heady, complex thoughts, whereas it’s everyday modes of thinking and speaking that are abstract, detached from reality for their lack of specificity and rigor.

Put another way, what seems like “common sense” is actually quite abstract given its vagueness, whereas artistic or philosophical speculation is concrete.

As I stood in the ruins of the abandoned cement plant at Concreto, an important early 20th-century labor center north of Gas City, I couldn’t get Hegel out of my head, wondering if the operation worked both ways.

That is, was there something about concrete and Concreto that was intensely philosophical? Did the place have the power to conjure deep and intricate thoughts or memories?

CONCRETO was almost named “Madeline,” an homage to Iola Colborn’s fourth daughter. And in Marcel Proust’s “In Search of Lost Time,” it’s a madeline cookie soaked with tea that prompts him to return to an intense investigation of childhood memories.

Concreto itself provokes memories of Allen County, launching one back to September 1903 when many people visited the little company town for the first time.

Many likely made the trip by way of the Iola Electric Railway, on a 10-mile track that connected Bassett, Iola, Gas, LaHarpe, Melrose, Layonville and LaGrange.

Probably more than a few saw the cement plant as an opportunity for work, one worth the risk despite harsh conditions not yet softened by labor laws and years of intense struggles on the part of unions and workers.

Indeed, the Concreto factory was a dangerous place, fraught with fires, explosions, and other novel forms of disaster.

Even the grocery store in Concreto (the town) caught fire, and burned to the ground in 1904.

Near what we thought might be that same room, Addie Thompson, who lives with her husband Jerry on the hill above the plant, pointed out to me where a tree had grown up and begun to lift a long rusted beam into the air.

Addie’s a stay-at-home mom to her son Thomas, and happens to be a Russian history buff as well as a reader of Trotsky.

Were she not home-schooling, at the time the factory was in operation she could have sent little Thomas to one of the many surrounding districts, perhaps Melrose, Sadietown or Lake View.

Mowing through the ruins on a John Deere gator, I marveled in awe as we passed bricked archways and structures resembling the remains of an ancient temple, many of the spaces once sites of back-breaking exertion as well as demise.

In July 1910, an enormous blast ripped through the plant killing Merlin Boyd, a chemist from Iola, and severely injured four others.

It happened in the regulatory room when someone lit a match near where gas meters were being tested.

I wonder how many smiling teens and their parents know that when they pose for senior photos along the concrete walls, with their entire futures ahead of them?

SPEAKING of life and death, the mortality of the plant at Concreto was recognized all-too-soon, and by 1910 the financial difficulties of the Portland Cement Company led to its closure.

It’s a result still being played out at the Concreto site today, where, on its north end, enormous structures are surrounded by round bales of crisp golden hay.

Stepping up the “stairs” of one tower until reaching a giddy height, I fought the haunting sense of vertigo as Addie shrunk on the ground below.

“It’s easy going up but harder coming down, huh?!” she exclaimed, as I gingerly tip-toed back down to solid earth.

Reaching the ground, the soil on which used to be two or three feet lower, I was reminded of how two years after the plant closed, another explosion rocked the end where we were standing and would’ve likely blown me to smithereens.

Apparently chemicals had remained in the laboratory near the boiler room and engine room, and reduced the entire building’s contents to $40,000 in rubble.

Less than a year later, an equally ruinous fate befell the Kansas Portland Cement Company, when it was forced to declare bankruptcy.

AFTER Portland Cement was sold, the Concreto plant found new life as a smelter for various metals.

A new rush of hope and optimism shot through the community, but the dangers of the place still remained.

In 1916, when John Suggs and Bob Gillsepie were dismantling old parts of the cement works, an entire wall fell on both of them.

Suggs’ leg was broken and smashed to bits and he likewise suffered internal injuries.

Such brutal fates were not enough to keep workers away, however, especially not when wages were raised at the smelter to a whopping $2.40 for unskilled and $4.50 for skilled labor.

Throughout the tour, I couldn’t help but dream them there, the workers swarming about the once-pristine structures like hive insects.

Their faces were dirty and their arms and legs ached, but they maintained a deep integrity and purpose, no matter how badly they might have been exploited.

Their ghosts still haunt the structures as well, not only the wreckage of the plant, but also the dam, pump house and pristine quarry nearby.

They shout and laugh and share delightfully dirty jokes, perhaps while leering and cat-calling the girls on the train or at the nearby Concreto hotel.

Their specters move without hindrance, pressing through the native bluestem that’s returning to reclaim the fields that cradle the plant.

We take the brown grains in our hands and crumble them into the Sunday wind.

When the owls at Concreto call in the dusky evening, the men return their calls, and wish they were solid enough to hunt the white-tailed bucks that roam the fields — those that Addie and Jerry feed and protect from harm.

According to Hegel, these are men of abstraction, their speech coarse and amorphous, their manners uncultivated.

Yet with their hands they made something solid and unyielding, something truly concrete, exact and unbendingly specific.

And in that way, perhaps they, too, were philosophers.