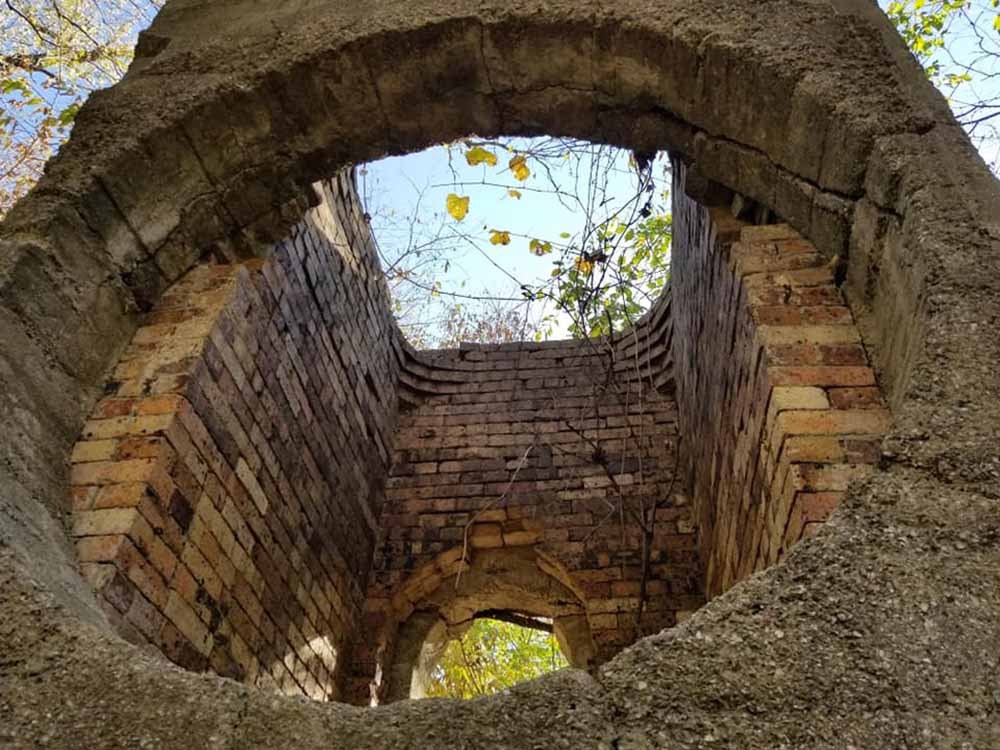 Collecting the fragments of Carlyle

The Carlyle area once boasted of a grand brick-making plant, but that hope soon crumbled. More than 100 years later, the castle-like remains still enchant.

Since before 1858, its historical traces stretch from at least Cottonwood Creek to along the banks of Deer Creek and beyond.

The original cemetery, with its shattered stones belonging to the Vezie family and more, is hidden within what has become timber.

Almost a mile to the east, nothing remains of the original schoolhouse save a crushed foundation beside a resident’s shed.

Neither of these is actually in Carlyle as such, and neither are the remnants of the Funston family home or Lumberman’s Portland Cement facility.

Perhaps this is all to say that Carlyle — pronounced colloquially by emphasizing the “lyle” — is not merely a town but its own little region of Allen County, a space across which tens of thousands of fragments are strewn.

Not long ago, I had the good fortune of visiting what remains of the Lumberman’s Portland Cement facility with former commissioner Bill King and historian Donna Houser.

Apparently, locals refer to the factory’s remnants as “The Castles,” and upon viewing it’s easy to see why.

The journey began by taking an upward jog shortly east of Carlyle, where we bounced through dry pastures checking out what remained of old railroad bridges.

Our next stop was at a modest body of water called Crystal Lake, which was once the quarry for Lumberman’s. Afterwards it was converted into a privately owned public pool, outfitted with a surprising number of amenities.

An Iola Register entry from June 1919 reads: “Quite a number of young people are planning on going swimming in the old quarry north of Carlyle this evening if it doesn’t rain. Mr. Shore, the present owner, has ordered an oak plank for a new diving board. Visitors are welcome as ever to the commodious dressing rooms which he erected there.”

An uncanny sight it was, as I dreamed them there amidst the evergreen trees and smooth white stones. Young people catching rays and laughing brightly, not a care in the world.

When we arrived at the cement plant itself, I could see where its outlines broke through the trees, like an enormous creature leaning in to get a better look at our approach.

The work on this place had begun in 1909, and folks had high hopes that its delivery of both bricks and cement would be economically transformative … “giving Allen rank as the greatest cement producing county in the west.”

By spring of that first year, 120 men were already at work making bricks, and the company looked to hire some 70 more.

Lots were bought in Carlyle to build houses and a hotel, around the same time as the Presbyterian Church was celebrating its 50th anniversary.

The town sprouted grocery stores, a pool house, a drug store and more. There were likewise plans to form a new school district, which ironically, later hastened the consolidation process (since the other districts didn’t want to compete for resources).

For the time being, however, everything was rosy. The plant was cranking out 150,000 bricks a day, and it seemed Carlyle was ready to bloom.

Yet money woes persisted from the outset, not just at Lumberman’s but at the neighboring Lehigh Portland and Concreto plants as well.

Cement was in trouble and investors wary.

In just six months, $800,000 had been spent and nowhere near that amount had been repaid. Parts of the plant were poorly designed and had to be rebuilt.

Despite the efforts of the plant’s receiver, the facility was forced to close and in turn it “paralyzed” the businesses in Carlyle.

In June 1913, the plant still owed $400,000 to its stockholders, and the company was suing the manufacturer for a wagonload.

After the dust settled, Lumberman’s was sold to Iola entrepreneur L.L. Northrup for a measly $41,000, despite the original estimate for the plant being $2.5 million. “The unfortunate stockholders would get nothing.”

Things had come to a crashing halt, like in 1882 when a train wrecked in Carlyle, throwing seven cars from the track and killing 50 cattle.

Reflecting on the incredible loss of hope (and dollars) connected to the plant, I wove my way through the undergrowth, attempting to get a closer look.

Most of the concrete buildings had long had their contents gutted and reclaimed by nature. It was almost as if another civilization from a distant world had once inhabited the site, but had since returned to its home among the stars.

There was graffiti of a hundred colors, including the caricature of a bird-flipping Kermit the Frog, though I marveled most at what I believed to be the remnants of various brick kilns.

Their strange shape demanded closer investigation, and I closely scanned the structure on tiptoes, fascinated by its design.

I had become so focused that I didn’t even realize when Bill decided to pull a prank on me by driving farther ahead into the field and out of sight.

No matter. I was enthralled, and the wait provided an opportunity to chat with the ghost of E.W. Boulson, who had decided to interrupt my reverie.

On June 2, 1919, the 54-year-old plummeted from a 40-foot drop inside one of the Lumber’s buildings and was killed instantly. He’d been helping to dismantle the plant so that the materials could be shipped to Oklahoma.

He seemed melancholy when I left him, perhaps because he sees so few visitors.

Back in Carlyle proper, I searched for any stretches of brick sidewalks that had been laid down by the residents of town in 1915.

One cool day in March, they simply closed their stores and offices, donned work clothes and took up the backbreaking task themselves.

I ran my hand across a promising patch of material, feeling it break and crumble under and between my fingers, presuming it had been manufactured at the plant nearby.

Again, I reflected on the action of breaking apart, fragmenting, and on how so much of the history of rural America is tied to loss.

August 1877, a windstorm kicked up and demolished Garrison’s cheese factory near Carlyle. “It was utterly blown to pieces.”

In time, might this not be the fate of every rural Kansas village like Carlyle (and its rival town, Florence), barring massive cultural and economic change?

As for now, soon all we will have are pieces …