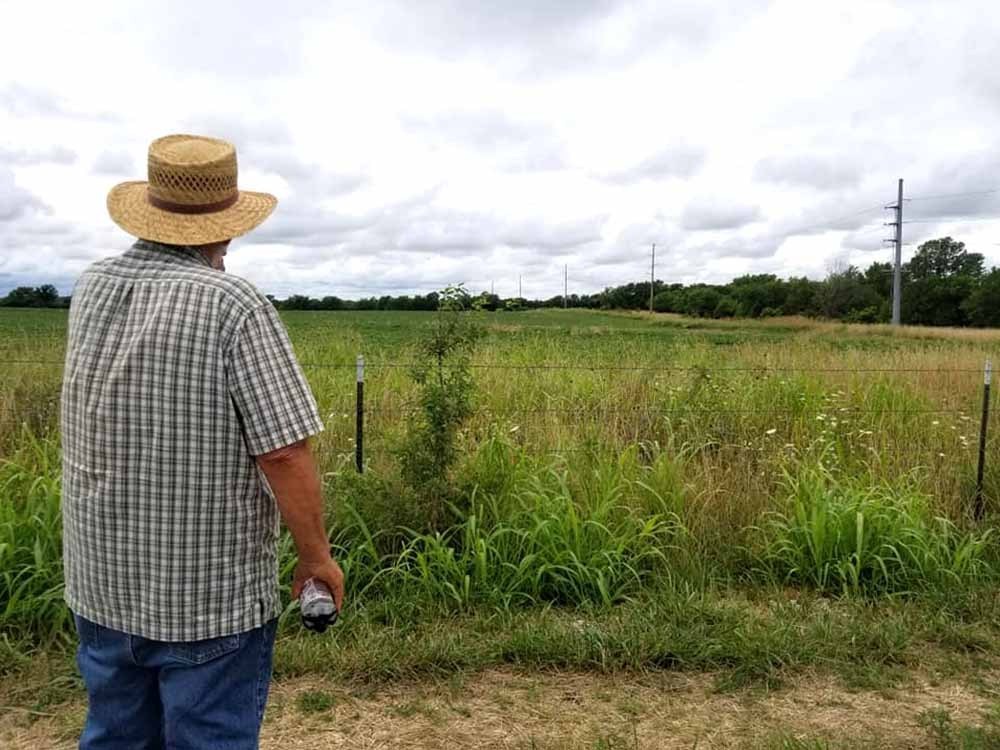 Short-lived birthplace of Allen County was settled by pro-slavery pioneers. Free-state legislators soon moved the county seat to Humboldt, and the town failed.

Veteran Register reporter Bob Johnson and I were in Cofachique, the birthplace of Allen County, now nothing more than a field of soybeans.

Looking across the field, I marveled at the raw emptiness of the scene, taken aback by how the origins of more than 160 years of local history were now completely concealed.

James Barbee, president of the Cofachique town company, was quite literally the first recorded death in Allen County, though the location of his grave remains a mystery.

Many other firsts sprung from that seemingly blank template near the banks of the Neosho River as well: first county seat, first court (which reportedly met in a stable), first government, first post office … and first lynching.

Though Cofachique had been abandoned by 1870, a fellow by the name of E.G. Dalson had been strung up in a deserted house there by a vigilante group, after they burst into the first Iola jail, overpowered the sheriff, and led him away with a rope around his neck.

He’d been accused of murdering his adopted son, but the truth is more ambiguous, that the son’s death had perhaps been accidental, unlike the result of E.G.’s summary execution.

As Bob turned his eyes skyward, marveling at the massive turkey vulture circling overhead, I thought of Dalson, swinging lifelessly from ghostly rafters.

I wondered if the local Osages, who traded tobacco and furs with whites at Cofachique, might have been able to instruct me, gift me some basic vocabulary as to how to divine the truth.

However, they might have also said the request was impossible, since because Dalson was hanged, his spirit was ensnared with ropes and never released from his body, never became part of the wind that might have been able to convey the secret of his death.

ANOTHER indigenous secret is the town’s very name.

Was “Cofachique” a fabled Osage chief known for his magniminity? Is the name a reference to the “Cofachiqui,” a tribe from South Carolina?

Or was “Cofachique” a she? The fabled native chief’s daughter from Georgia who gifted the murderous Spanish conquistador Hernando de Soto with pearls and a ruby ring?

Although it’s unclear who the town was named for, by contrast, it’s quite apparent who the people were that actually founded Allen’s first seat.

There, not far from the bends of that churning muddy river, once stood a band of pro-slavery pioneers from Fort Scott, who had every intention of helping to make Kansas a slave state.

They had the support of prominent pro-slavery statesmen like Territorial Secretary Daniel Woodson, namesake of neighboring Woodson County, who given its pro-slavery politics christened Cofachique “the permanent seat” of Allen County.

To put it baldly, the residents of Cofachique did not believe that Black people were, in fact, “people.” Instead, they were things, and as such possessed as much worth beyond their utility as do the hay bales dotting the Cofachique field today, southwest of Iola.

Whether there were actually slaves at Cofachique is unclear, but it’s certainly possible.

Yet the racist legacy of the settlement was not to last, for “in 1858, a Free State legislature, looking upon Cofachique as a pro-slavery nest, removed the county seat to Humboldt, a new town that had been laid out the year before, some seven miles south of Cofachique.”

The Free State legislators that replaced the “Bogus” pro-slavery legislators weren’t the only ones who gave Cofachique a disapproving eye.

Feelings of “enmity” were directed at Cofachique from anti-slavery settlers living in Humboldt and Iola, and soon the town began to fail (not to mention being surrounded with a hilly terrain and having no good source of well-water).

Once Iola was officially founded in 1859, most remaining buildings and businesses were relocated to the northeast, leaving only a few scant archeological traces behind.

They never even had the chance to fly the rebel flag, since by the time the Civil War had started, the town had already failed.

Had it survived, pro-Union forces would have likely burned it to the ground in an act of riotous, Jayhawking demolition.

Even the Cofachique Township had its name stripped, to become thereafter Iola Township.

That the townsite was not only abandoned but obliterated, “forgotten,” it seems was intentional. The people of Allen County had spoken and their values illuminated.

There is no place for the horrors of slavery here. Not even a trace of such hatred or malice will be permitted.

We will erase your very name. … In flames, if necessary.

THE wind was barely moving, the air heavy and stagnant, as I watched the children of a Black family playing at Cofachique Park in Iola, across from the armory.

An older daughter was chasing a younger one as she squealed with delight.

Of course, they would not have been welcome nor safe in Allen County’s first seat, unless they were destined for servitude as slaves, though that’s not something apparent from the memorial marker positioned there.

“Founded in 1855, the town of Cofachique was located southwest of where Iola now stands, and is believed to have been named for an American Indian princess. The town lasted only a few years and in 1859 many of the citizens of Cofachique literally moved their homes and business buildings to form the City of Iola.”

“In 1995, the Iola City Commission held a contest among USD 257 fifth-graders to decide upon an official name for this park. They selected Cofachique Park, which was submitted by the 1994-95 5th grade class from McKinley Elementary School.”

After kneeling to reread the caption on the marker, I rose to survey the adjoining wood sign as traffic tore by along the highway.

Nonetheless, the world slowed, and I thought at length about the question of naming, about remembering, and what we choose to honor from the past.

Was that what was happening here? Honoring?

I thought about men like Daniel Woodson and the settlers from Fort Scott who made Cofachique a reality, and to what end.

I dreamed them there, along that rise by the river, harboring murderous rage in their hearts borne of a sense of righteous and unquestionable superiority.

Had it been up to them, I shudder to think what the country would look like today. … and at the fate of those two young Black girls.