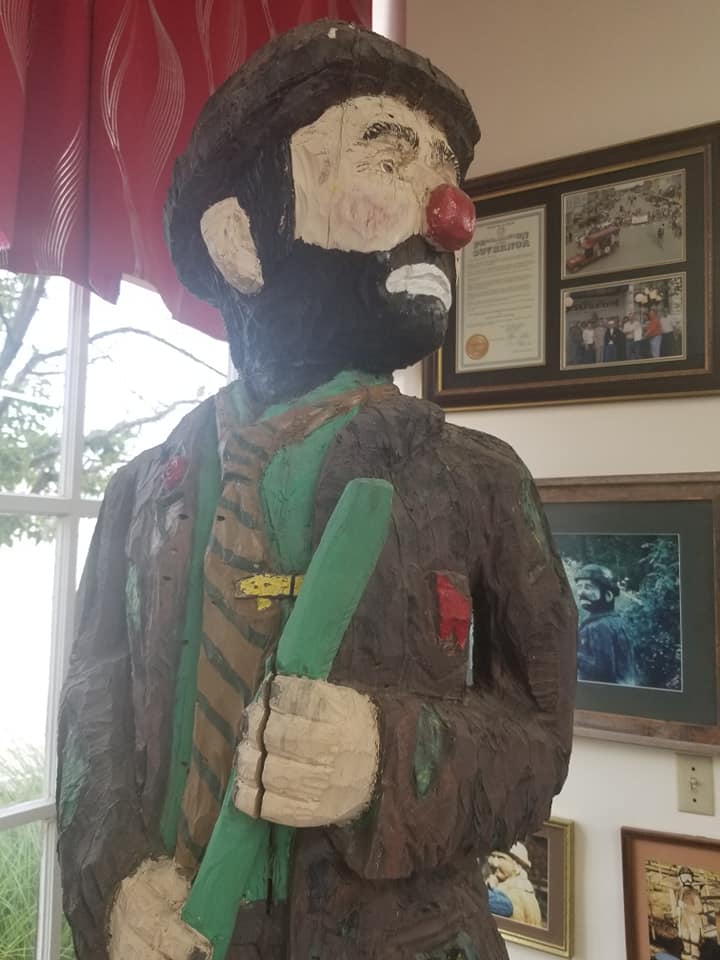 Clowning around with Kelly

Emmett Kelly grew up in Sedan with the lullaby of nearby train tracks. He would become one of the most famous clowns of all time with his "Weary Willie" sad clown act.

The blazing sun was beginning to blast the summer air as I shambled down the streets of Sedan in Chautauqua County, half asleep.

I’m the polar opposite of a morning person, but sleeping in a hard bed at the hunter’s lodge may have had something to do with it.

The Emmett Kelly Museum hadn’t yet opened its doors, so I wandered into a nearby historic area known to locals as The Hollow.

Though the scene of natural beauty near the “cave” was tranquil and soft, I couldn’t shake a feeling of rigid overwhelming melancholy, and a palpable sense of loss.

But as it turns out, given whom I’d come to meet, experiencing a creeping sense of despair in the midst of a joyful scene was perfectly appropriate to the occasion.

Before becoming the most famous clown in the world, Emmett Kelly was just a country boy from Sedan.

Born Dec. 9, 1898, to a section foreman on the Missouri-Pacific Railroad, his “principle lullaby was the sounds of the rolling cars, clicking wheels and lonely whistles in the night.”

Years later, Kelly wrote in his autobiography “Clown,” that he still associated the sounds of the circus train with growing up in rural Kansas.

Given his lineage, schoolmates christened him “The Irish Potater,” or simply “Tater,” which enraged the boy, but didn’t stop him from getting into various hijinks.

For indeed, another of his early recollections from Sedan included “being hauled out from under a string of freight cars after I had climbed our fence,” and after which a railroad worker would always find him and return him to his yard.

KELLY grew up poor, although he didn’t realize it at the time, his father making only about $1 a day.

And indeed, the family’s poverty didn’t stop him from remembering fondly how their country home had bright lilac trees in the yard or a garden or chickens or a cowshed where his mother kept a Jersey.

Kelly likewise recalled the day when he received his very first spanking, after climbing a telephone pole like a cat and sitting atop the cross beam.

“It was a lot higher than the tent where I did my first aerial work,” Kelly wrote, “and of course it terrified my mother and the neighbors.”

Another of Kelly’s most prescient memories of growing up in Sedan were the band concerts held every Saturday on the public square.

“I always loved the music of the band,” he wrote, “and even now when the great circus bandmaster, Merle Evans, leads his boys into a break-neck galop I get bubbles in my blood.”

Hence getting into trouble for sneaking out to attend, Kelly said, “was worth it.”

AN ADDITIONAL one of Kelly’s fond memories from Kansas included a particularly poignant Christmas, where his mother strung popcorn from the Christmas tree boughs and made the whole house smell seasonal.

He received a drum for a gift, he recalled, and his sister, “a doll and a set of dishes.”

Kelly and his family’s time in Kansas was not to last long, however, as his father was worried about being forced to retire early from the railroad.

“Hell, they’ll never fire me; I’ll quit first!” he vowed, and so set about saving up money to transplant the family to Missouri, to a place known, oddly enough, as Texas County.

“We cried ourselves to sleep, lonely for our home,” Kelly remembered. “George Wheeler said he bet we were the only people in the world who were lonesome for Kansas.”

OF COURSE, Emmett Kelly’s fame came from developing the character of “Weary Willie,” a melancholy clown whose image sharply diverged from that of traditional clowns with their bright and exuberant appearances.

Willie started out as a drawing in the early 1920s, which was Kelly’s original passion, but would only take on a life of his own more than a decade later.

This would have been when Kelly was performing for the Gertram Mills Circus, though it was with Ringling Brothers Barnum and Bailey that he would ultimately become a legend.

BUT WHY precisely was Willie so depressed and blue? What was the source of his incessant existential malaise?

According to Kelly, following his divorce with wife Eva Mae, “my family scattered, I had only the sad-faced hobo and we became at this time indistinguishable.”

And it was an image he continued pushing to its limits.

“I did everything I could think of in contrasts,” Kelly wrote. “Where other clowns were white and neat, I was unshaven and ragged. They were active; I gave the appearance of doing almost nothing, and what I did accomplish was geared to a tempo so relaxed that it would make a snail seem jet-propelled.”

CONTINUING to unpack the character of Willie, Kelly notes how “I am a sad and ragged little guy who is very serious about everything he attempts — no matter how futile or how foolish it appears to be.”

“I am the hobo who found out the hard way that the deck is stacked, the dice ‘frozen,’ the race fixed and the wheel crooked.”

In other words, Willie is a champion of the downtrodden, the one who realizes too late that the Dream of American prosperity is perhaps just that, a dream, and that the opportunities supposedly presented by society are illusory.

Willie is disenchanted and distraught, for instance, while reading the Wall Street Journal, knowing full-well that the news either isn’t good or isn’t for him at all.

Willie is poor and abject, and despite any rose-colored optimism, that isn’t going to change.

IN “CLOWN,” Kelly further observes that, with regard to Willie’s attitude, “all I can say is that there must be a lot of people in this world who feel that way.”

For as he explains, “in my tramp clown character, folks who are down on their luck, have had disappointments and have maybe been pushed around by circumstances beyond their control, see a caricature of themselves.”

“By laughing at me,” Kelly says,  “they really laugh at themselves, and realizing that they have done this gives them a sort of spiritual second wind for going back into the battle.”

In other words, the social and economic situation may be bleak for Willie and the rest of us, but laughter provides a certain manic power of resistance and a levity in the wake of insurmountable obstacles.

The truth that only a clown really knows …