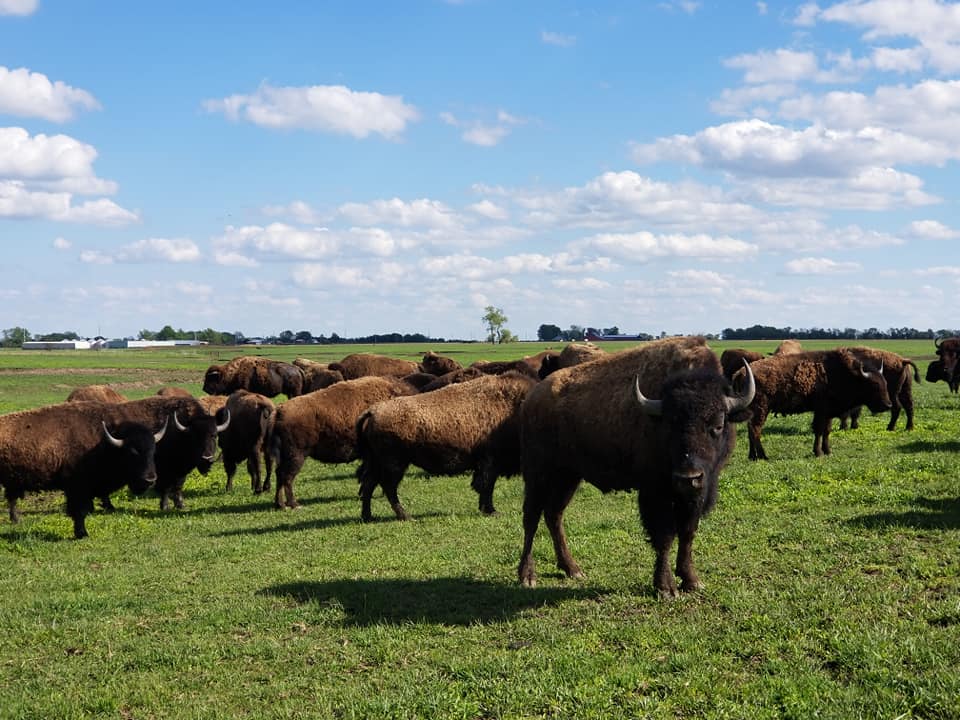 It was a warm summer day more than 145 years ago that townsfolk in Howard discovered a pair of buffalo — previously thought extinct — had come to town. The story of how those "beasts" were chased Main Street until being gunned down by local pursuers has become legend — and likely a little embellished along the way.

It was a beast born from the depths of hell …

At least that’s what the editor of the Howard Courant said of the infamous buffalo that found its way onto the city’s streets in the summer of 1875.

It all began on a warm Sunday morning, folks recalled, when Frank Dewey sent his 12-year-old grandson, Van Flagler, to tend the cattle.

Not long after leaving for his chores, however, the boy returned looking as though he’d seen a ghost.

Two alien beasts, it seems, were grazing with the usual herd, and looked like nothing that the young Flagler had ever seen before.

AFTER quickly mounting his horse, Dewey rode out to investigate.

He galloped across the landscape at a clip, the surprisingly soft July air lightly playing with his movement toward the destination.

It was then he saw them: two lumbering giants, namely a shaggy buffalo cow and bull, who had decided to share breakfast with the herd of cattle.

There they stood, nonchalantly chewing away, as though they’d always belonged there, barely even looking up to note Dewey’s presence.

In response, he decided it was time for a buffalo hunt, and returned to fetch his gun.

MIND YOU, by this time, most folks thought the buffalo had been completely eradicated, and thus the story is told as involving “the last wild buffaloes” in the region.

That didn’t stop the residents of Howard, however, from determining it was time the beasts met their maker.

Dewey returned with gun in hand, flanked by several friends, many of which were also armed.

The group separated the buffaloes from the herd, and soon the chase was on, with them stampeding across the wild and untamed prairie.

A shot from Dewey quickly felled the buffalo cow, sending her crashing into the dirt.

THE BULL was still on the loose, and perhaps enraged by the loss of its mate.

It trampled in the direction of the Elk River, as it headed up toward Howard, making a bee-line for an unsuspecting group of boys who’d skipped Sunday School to go skinny-dipping.

Upon seeing the mighty creature, they let out a series of panicked yelps and scattered in multiple directions.

Dripping, shoeless and half-naked, one boy ran like lightning into a nearby stand of cottonwood trees, while the rest took shelter in a native stone barn about 300 yards in the distance.

(One of the young men in question happened to be Henry Zirn, who went on to gain local repute as the president of the First National Bank of Howard.)

It wasn’t enough to elude the buffalo, though, who not only noticed the fleeing youngsters, but decided to charge them head-on.

No one was hurt badly, but the buffalo’s anger was growing, not only from being provoked, but having been repeatedly shot at from behind.

It’s said that although several wire fences blocked its path, the buffalo charged right through them, and made its way to town.

WHEN THE buffalo passed the schoolhouse where the Sunday School classes were taking place, pandemonium erupted.

Not only did the classes come to an abrupt end, many of the children in attendance joined the train of pursuers that were chasing the mighty bison.

A few, though, chose to cower beneath their desks.

Inside homes, parents locked doors, pulled down shades and prayed to the almighty for protection.

IT WASN’T until it had run practically the entire length of the main street and reached the north end of Howard that the creature was felled.

Its blood-stained rage had drained out, the mighty bull came haltingly to a stop, putting a single hoof in front of the other slower and slower until … collapse.

When the buffalo was skinned, it had no fewer than seven bullet holes in its flesh, since none of the small arms possessed enough firepower on their own to end the animal’s life.

Estimates say that the bull was chased nearly 10 miles before reaching its final destination, and after both the bull and cow were dressed out, the people of Howard literally savored the taste of bloody victory.

YET NOT everyone in town celebrated, including young Clarence Aitchison, who at the time was working as a printer’s devil at the Howard Courant, under the tutelage of editor Abe Steinberger.

While Steinberger wrote up what would become the perhaps most legendary tale in the town’s history, Clarence set the type, and ruminated.

He’d read the account that his boss had written, wherein the buffalo bull was depicted as having been loosed from the jaws of damnation itself, and the townspeople depicted as heroic angels full of wisdom and reason.

There was just one problem.

Clarence had been among the group of boys who’d skipped Sunday School to go swimming, and he’d seen the “beast” first-hand.

He knew that the buffalo had simply been afraid, upset and trying to escape, regardless of Steinberger’s wild exaggerations made for the sake of selling newspapers.

By contrast, in the boy’s estimation, what had happened was merely cruel, pathetic and unnecessary, with hardly a bit of actual sport in it.

He couldn’t stop thinking about how, once something is dead and gone, such death is totally final and without the possibility of return.

Clarence therefore decided that day he’d become a newsman, and that he’d always tell the truth, no matter the cost.